Some days, you come to work and just do your job normally, like a regular Joe. And then some days your colleagues accost your eyeballs with the Cats trailer, and your eight-hour work day goes to veritable shit.

I think you can work out what day it is today for me.

It’s also Friday. Fridays are always a difficult focus day for anyone, are they not? Put the two together and you have Mel spending two hours watching, re-watching, reading Tweets about and incessantly discussing the fucking Cats trailer. I am at one with the Cats trailer. I will dream of this trailer for eighteen consecutive days, I believe. A psychic once told me I had psychic abilities so this prediction is likely true, tbh.

Anyway I figured I may as well turn this bin-fire of a morning into something mildly productive, so here they are. My very, very over-analysed thoughts on that godforsaken Cats trailer.

1. I Have Realised My Greatest Fear Is Human-Animal Hybrids

The reason the Cats trailer disarms me so much, I have realised, is because human-animal hybrids should not exist. They are the devil’s work. They actually are – I’m fairly certain from my born-again teenage years that at some point the devil made like a half animal thing? Or was that Greek mythology. Whatever. It’s a fact regardless of whether it actually happened in 4,482 BC.

Do. Not. Make. Films. With. Cats. That. Walk. Like. Humans. Do not! Andrew Lloyd Webber should not have made a musical of it, but what was done was done! And then they decided to remind us all that this concept exists!

It’s rude and wrong and frankly, I think might be a chargeable offence. Someone look into this.

2. I’ve Figured Out What’s Wrong With The Cast

Everyone’s fixated on this batshit casting, aren’t they. Well, ohohohoHO friends, I have watched this trailer enough times to TELL you what the problem is!

See, if I can get a bit Pepe-Silvia-meme on you here for a sec, it comes down to groupings.

I can accept Taylor Swift and Rebel Wilson in a film together. This makes sense – I’m frankly still incensed no one thought to add Tay Tay to the Pitch Perfect line-up, tbh.

I can also accept Judi Dench, Ian McKellen and Idris Elba in a film together. Three brilliant British thespians! I don’t know what a thespian is. Let’s move on. Three brilliant British… actor people! I can imagine a very serious Les Miserables take on Cats with these bad bitches in it, except also it’s not human-animal hybrids and also it’s not Cats at all, it’s Luther: The Movie.

Then you’ve got James Cordon. IDK, like you *could* lump him in with Rebel and Taylor but it doesn’t entiiiiirely work? And don’t get me started on Jason DeRulo. What is he doing here.

And then it’s like Jennifer Hudson? I’m sorry, but Jennifer Hudson was cool in 2006 when Dreamgirls was a thing and she blew us all away with that “AAAAND I AM TEEEEELLING YOUUUUUU, AAAAAAAAHHHHM NOT GOOOOOINGGGGG” brilliance. I will watch that video of her performance every day of my life, but I will NOT accept Cats trying to re-create it with some much shittier tune.

Basically what I am saying here is that you have two films – shit Pitch Perfect and Luther: The Movie and then a few stragglers that need to go home, frankly.

I warned you I’ve been thinking far too much about this. I WARNED YOU. After maybe the fifteenth watch, I started to wonder how these cat people would have sex. Don’t lie, it’s crossed your mind too.

My take – the cat-people have sex like people. I don’t want to discuss this any further or think too much about where the bits are.

4. Where Are Their Bits

I LIED I CAN’T STOP WONDERING WHERE THE CAT BITS ARE. WHERE ARE THEY.

I know this seems really like weird and porny and invasive but also you did this, film. You made me wonder, because they’re not at the front.

I mean I don’t really know what I want from this film on this front, because seeing a cat penis/vagina constantly would also be alarming but at the same time, this is where my brain is now people. This is where we are. You made your choice.

5. Why Do Some Get To Wear Cat Clothes

Why do some have to prance naked and others get to wear full cat regalia? 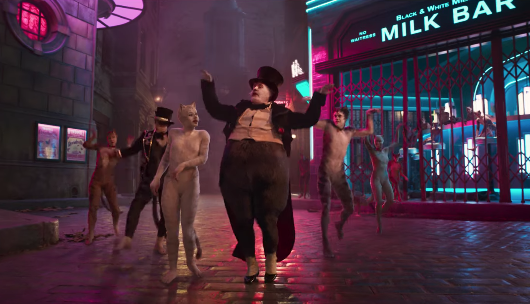 That’s James Corden in a fucking tux. Why?

6. Who Is This I Fucking Hate This One 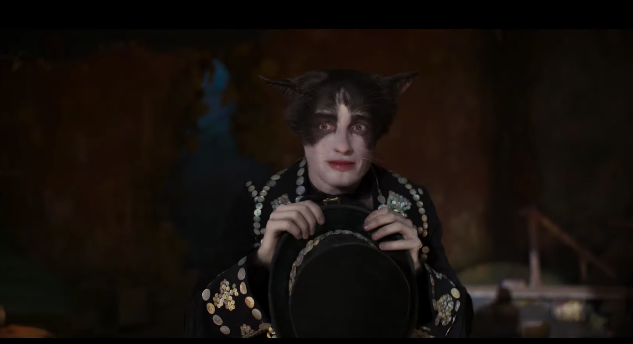 IDK why but I feel particularly enraged whenever this annoying fuck comes up in the trailer. Something about the floppy ears and the weak face. He looks like that irritating hanger-onerer type who is like “hey guys, wanna go to a different bar” and everyone’s like “nah” and instead of pleading his case he just goes “uh ok then” and then someone makes him go get a round of beers and he doesn’t pipe up and say he got the last round, he just does it bc NO SPINE.

Do not be this stupid cat.