Cara Delevingne is unfortunately copping shit for her ongoing stance against the Coachella Music and Arts Festival while also praising Beyoncé for her history-making set.

She has taken a strong stance against the festival because owner Philip Anschutz is a notoriously bad person, using his millions to fund anti-LGBT, pro-gun and anti-marijuana agendas.

It’s a rare showing for any celebrity to be against the most “see-and-be-seen” festival in the entire world, but if there’s anyone who can unite us all, it’s Beyoncé. Her headlining set was a two-hour marathon of a once-in-a-lifetime kind, that paid homage to black culture, reunited Destiny’s Child and invoked declarations of adoration from all around the world.

That included Cara, who like the thousands of people who couldn’t (or wouldn’t) make it to Coachella, watched Bey’s performance on the livestream.

“I am speechless,” she wrote. “That performance made me burst into tears and sent shivers down my spine. Especially the Destiny’s Child reunion. ICONIC is an understatement. Thank you for inspiring so many and for lifting each other up.”

I am speechless. That performance made me burst into tears and sent shivers down my spine. Especially the Destiny’s child reunion. ICONIC is an understatement. Thank you for inspiring so many and for lifting each other up. #GirlPower @michellewilliams @beyonce @kellyrowland

But some people took issue with Cara praising Beyoncé when she’s so anti-Coachella, as if merely taking a stand on an issue suddenly disallows you to talk about anything positive.

“But @caradelevingne … What about all the controversy you posted about Coachella? It doesn’t matter anymore bc of the reunion?” commented one person on her post.

“Exactly my thoughts,” replied another, while a third aded: “I was thinking the same.”

“I am allowed to shame the festival and show my appreciation of an artist at the same time,” Cara replied. “Just because I love Beyoncé doesn’t mean I now love Coachella. I still wouldn’t go.”

She also took to her Instagram stories to explain further.

“Some people are commenting on the fact that I posted about my anger towards the owner of Coachella and then about Beyoncé. My hashtag was #Nochella. I still refuse to go to a festival that is owned by someone who is anti LGBT and pro gun. I am allowed to shame that man and the festival and show my appreciation at the same time. Just because I love Beyoncé doesn’t mean I now love Coachella. I still wouldn’t go. And I will let nothing get in the way of me showing my love or hate for something. Don’t let anyone come between you and your truth.” 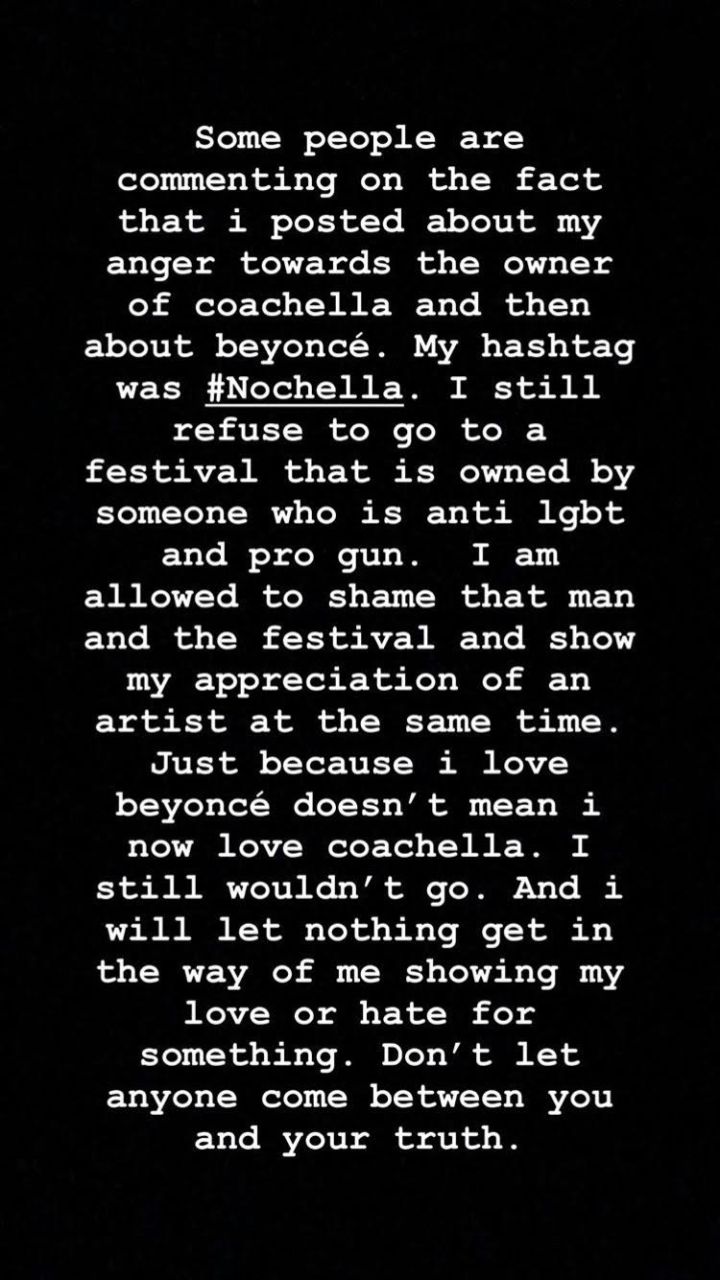 The #Nochella hashtag is often used by people taking a stand against the festival, not necessarily for the political views of its owner, but for the hype that it brings.

If I hear the word Coachella ONE MORE TIME… #nochella pic.twitter.com/zxAZjWkRKL

Coachella should make its own social network/app for people to post all their Coachella, Ferris Wheel and #desertvibes pictures, where I and the rest of the world don’t have to see them for the next two weeks. #Nochella

Coachella was literally the most overrated festival I’ve ever been to. No one cares about the music, it’s a gathering of really superficial people who only care about their outfits and taking Instagram photos. Not to mention the CEO of Coachella is a bigot. #nochella

Look, fair enough. Speak your truth, praise / criticise whatever. Getting annoyed that Coachella dominates social media for two weeks of the year feels a bit performative and an easily fixed problem, but fine, you do you.

Meanwhile, basically everyone in the entire world is still picking their jaws up off the floor from Beyoncé’s performance, and everyone who isn’t probably isn’t worth your time. That’s all.