Cabello is gearing up to release her next project titled “Romance” and after sharing some video snippets from what’s to come, the ‘Fuck It I Love You’ songstress wrote “What the hell” under one of the posts.

what do I know about love ? 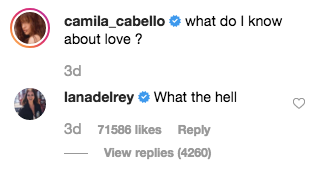 Fans immediately interpreted this as shade and assumed that Lana was attacking Camila for supposedly knocking off the same style and format as her 2012 music video for ‘Ride’.

Reactions to Lana’s comment ranged from “Drag her PERIOD” to “She copied the vibe” and after days of back and forth between Lana stans and Camila stans, the sugar daddy connoisseur finally clarified her comment.

“I meant what the hell in a good way,” she wrote in response to a fan’s question on Instagram. “As in it’s so good.”

The awkward interaction comes after Del Rey told a journo that she recently had coffee with Cabello and said that she was “so sweet”.

“She was just so sweet pic.twitter.com/xW3dW45oT8

At Metacritic, the album received an average score of 87 based on 19 reviews, indicating “universal acclaim”, making this Del Rey’s best-reviewed album to date.

Go forth and binge-listen the album on Spotify or iTunes. Your ears work hard, they deserve a treat.