Calvin Harris is fronting the cover of British GQ next month, and a sneak peek into the interview is now available to the public’s beady, celeb drama-lovin’ eyes.

We found out about the reported break up of Taylor Swift and Tom Hiddleston only days ago – and those playing at home would know that Calvin was very very suss over how fast she moved on after their hyper-dramatic, extremely public break up.

So the timing of this interview is pretty bloody spectacular, really.

But Calvin was civil about it this time, speaking about how timing was their ultimate failure:

When we were together, we were very careful for it not to be a media circus. She respected my feelings in that sense. I’m not good at being a celebrity.

[But] when it ended, all hell broke loose.”

He spoke out about how he went rogue on social media after the break up, accusing Swift of cheating and tweeting compulsively after people discovered she wrote his most recent song, ‘This Is What You Came For’ under a pseudonym. 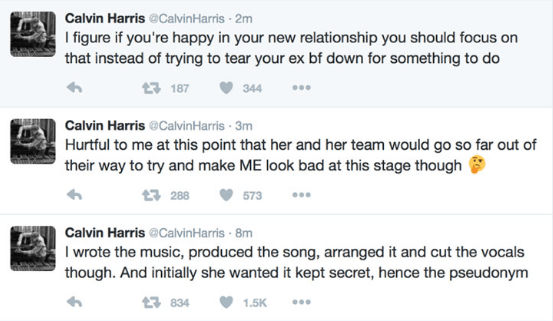 “It was completely the wrong instinct. I was protecting what I see as my one talent in the world being belittled.

It felt like things were piling on top of me, and that was when I snapped.

Now I see that Twitter thing as a result of me succumbing to pressure. It took me a minute to realise that none of that matters. I’m a positive guy.”

Look – break ups are never bloody easy, and being so heavily in the public eye would make it a billion times worse.

And considering Taylor’s just gone through a break up herself, she’s probably feeling this pretty hard rn too.

In other news, someone’s already made this gif: