Gather round history nerds and those of you who just love gawking at television bloopers, for it looks like there’s a pretty big one in episode one of Netflix’s Bridgerton, and it’s pretty fkn noticeable too.

Now for anyone expecting a giant can of Mountain Dew to appear in the middle of a shot, maybe dull your hopes just a little bit. This mistake is purely a historical one, and tbh you wouldn’t even notice it upon the first watch. Like us, your eyes were probably glued right onto The Duke (Regé-Jean Page) and his impeccable abs.

What exactly is the error, I hear you screaming through the screen? Well, take a look at this picture below and tell me if you notice anything a little bit… off. Is it the horses? The window? Take a real good gander. 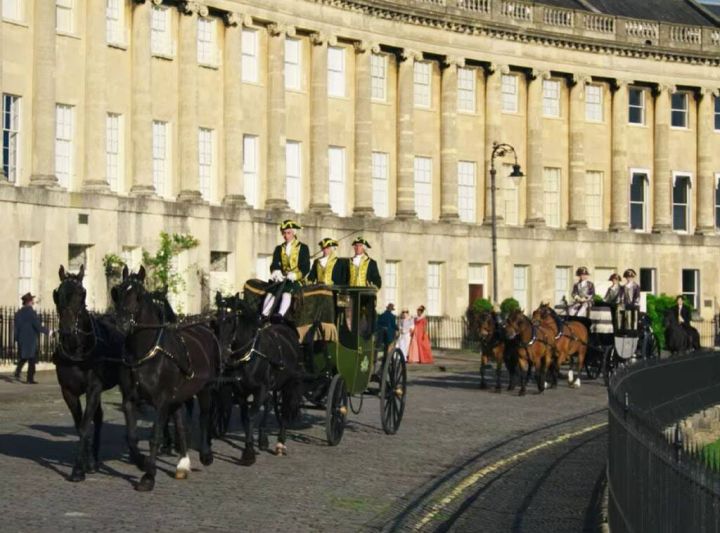 See that massive fuck-off yellow line? Yeah, that’s the big error that has everyone in an absolute furore. Well, not really, but it is making waves online.

Now, if you’re a huge history buff, you would have picked up on this mistake straight away. You see, Bridgerton is set well into the 1800s, but the U.K. didn’t have any kind of yellow lines on their roads until the 1950s.

“Something wrong with people if they are focusing on the yellow lines on the roads, hidden Primark signs and pipework going down the buildings, instead of focusing on the pure beauty of The Duke,” wrote one fan on Twitter.

I simply must agree.

Something wrong with people if they are focusing on the yellow lines on the roads, hidden primark signs and pipe work going down the buildings. Instead of focusing on the pure beauty of The Duke ???? #Bridgerton

Oh dear, modern yellow no parking lines on the street in the tv drama 'Bridgerton'.
I've worked on a few films/tv shows as historical consultant and art department, I remember our lot painting over modern white lines on a street or covering the whole street with earth 😉 pic.twitter.com/AN4v6kqhCB

Another fan noticed that seedless grapes probably wouldn’t have been a thing at the time either, which is just another little inconsistency that only history nerds would really pay attention to.

“Those are seedless grapes in that fruit bowl… they wouldn’t have been around in the 1800s,” he wrote.

“They should’ve used a seeded variety for historical accuracy.”

Oh well, you can’t please everyone, can you? I’m just here for the hot guys.

You will also spot a Primark poster, a single yellow line parking restriction and a parking sign on a lamppost. Down pipes on the front of buildings which would not have been there and a modern day doorbell.

Still a great one to watch though. #bridgerton