After months of anticipation, the long-awaited nine-minute, unedited conversation between Alex Nation and Richie Strahan finally aired on Bachelor In Paradise and it was honest to god more heavy than even we anticipated.

After mustering up some “dutch courage” (as she described it on the Kyle & Jackie O Show) via those fruity cocktails, Nation takes Strahan aside to have the fated talk.

“I’m a little bit surprised to see you,” Alex began.

Richie said that he “just can’t believe someone would do that to someone” regarding an unknown incident, which fired Alex right up:

“I feel like people would have a very big opinion of a woman, being left alone, to do something that involved both of us.” 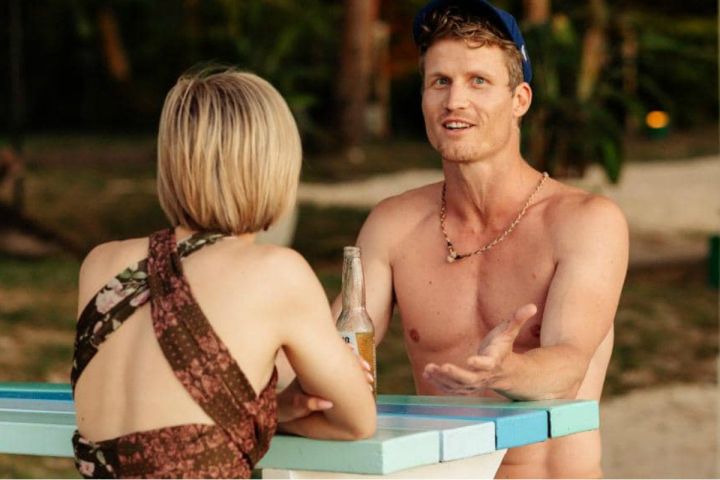 Richie tells his ex-girlfriend, who he met back when he was The Bachelor, to come right out with whatever she’s holding back.

“Don’t beat around the bush Alex, say it,” Richie insists. “Because you’re not gonna like my response. Because we did talk about it. We talked about the whole thing and what you said to me blew my mind…. I’ve had to come to peace with this.”

“I did a lot, Alex. I did so much to try and keep our relationship going,” Richie said, before Alex interrupted with the following bombshell:

“I was left alone, to go through something massive that no woman should go through.”

“Alex you’re a mother. I know that, clearly. I spoke to you at length about that because you’ve gone down that pathway. You know what is involved with that. We spoke at length about it and I supported you and your decisions.”

Alex goes on to reveal that she had given him 48 hours notice to be there for her but he did not show up.

Richie claimed she had changed the date numerous times, and in the end he was working on a mine site and couldn’t make it to her.

“But that doesn’t matter. If you’re a man and you’re in that situation, you move mountains to be there for your partner,” Alex said.

The heated exchange ended with the pair reconciling and agreeing to press on as mates.

“Like I said I’ve come to peace with it Alex, and I’m fine with it. I’m happy that you’re in a good spot, that you think you’ve grown as a person. I didn’t want to get into any salacious details, and I’ve stayed quite composed,” Richie told Alex.

“I think we’re doing a good job. It is bizarre… but I want you to be comfortable. I’ve put it to rest, I’ve moved on and I think you’re a good person and that you deserve to be here and find someone potentially. I just didn’t want it to be uncomfortable,” Alex added.

While the pair didn’t outright say what the incident was, fans on Twitter were able to read between the lines:

That can't have been easy for Alex and Richie. I'm actually impressed that they dealt with the situation they found themselves in with maturity. Both made their views known, acquired closure they sought and wished each other well #BachelorinParadiseAU

I feel like sharing that Alex had an abortion was just something that they should have just kept between Richie and Alex. It was actually so unnecessary for them basically blurt that out to Australia #BachelorInParadiseAU

So was it an abortion Alex had? It’s the only plausible scenario I can think of in my head. Richie was just not there for her.. #BachelorInParadiseAU

The discussion between Richie and Alex on #BachelorInParadiseAU is both heartbreaking and infuriating- he clearly left Alex in a time where you need support… no matter what you think is the right decision it’s still confronting and emotional..

I’m not saying that either of them are right in the situation but it sounded like it was a lot of why didn’t Richie make more effort but where was the effort from Alex ?

Who else thinks ALEX got pregnant and then had to have an abortion and Richie didn’t show up??? Cos they just kept talking in circles ????????????????#BachelorInParadiseAU

That was the rawest television I’ve seen in a long time but it’s a conversation that needs to be had in Australia. My heart aches for Richie and Alex + I hope that this sees a positive media dialogue started: or at least not a negative one ???????????? #BachelorInParadiseAU

That talk between Alex and Richie was super heavy! Especially considering what they were hinting at! That was an intense conversation! #bachelorinparadiseau

*if* the thing between Alex and Richie was a termination, then I hope the producers gave both of them an opportunity to keep that from going to air (I know, ethics in reality TV…) #BachelorInParadiseAU