Bachie fave Ivan Krslovic – the dude who this year just chucked two full avos into a blender, in a failed attempt to win Ali Oetjen‘s heart – has apparently been tapped as a potential judge on Network Ten‘s rebooted Dancing with the Stars, hosted by Amanda Keller and Grant Denyer, as the Daily Mail quotes NW.

An insider told the rag that it looks pretty bloody likely Krslovic will get to appear on the show – but not as a contestant: “It’s not exactly fair to let him compete against others who’ve not had any dance experience – but there’s definitely a place for him on the show.

“He found fame on Ali’s season of The Bachelorette dancing, so this is a natural progression for him – and a good way for Channel Ten to use their existing talent.“

But it sounds like, while Krslovic is pumped to potentially join the rebooted series, he’s a bit disappointed, telling the tabloid he’d “rather be a contestant“.

The insider went even further with the story, saying that the lanky boy with an unbridled PASSION FOR DANCE is already rehearsing in LA for the first episode. He’s definitely still constantly dancing in his Insty Stories and posts.

Krslovic himself, the man who week-in, week-out, beguiled us with his dancing skillz on telly, but was brutally dumped from The Bachelorette, accused of being there only to serve his R&B dancing career, shared the story from the tabloid earlier today on Instagram.

Thank you @nwmag for the shout out

it would be awesome to be apart of this if it all happens! Maybe next year

My, that’s a lot of hashtags.

Thank you @nwmag for the shout out???????????? it would be awesome to be apart of this if it all happens! Maybe next year ???????? #dreambig @channel10au – – #dancingwiththestars #australia #channel10 #judge #dreams #excited #letsmakethishappen #passion

Krslovic’s also reported to have written – in a possibly deleted caption – “CAN THIS YEAR GET ANY BETTER!… what honour and a privledge it would be to be working on such and amazing show (sic) and being involved in something that I’m so passionate about…DANCE!

“[W]ould be so much fun to be a judge… would definitely bringing my highest levels of excitement (sic) and biggest smile to the table“.

READ MORE
Michael Turnbull, Dogger Of The Boys, Is Now Engaged To Someone From Reality TV

He also had a flick through the mag in his Insta Stories, and quickly found NW’s Bachie NY resolutions spread, featuring himself and castmates, Paddy Colliar and Bill Goldsmith. 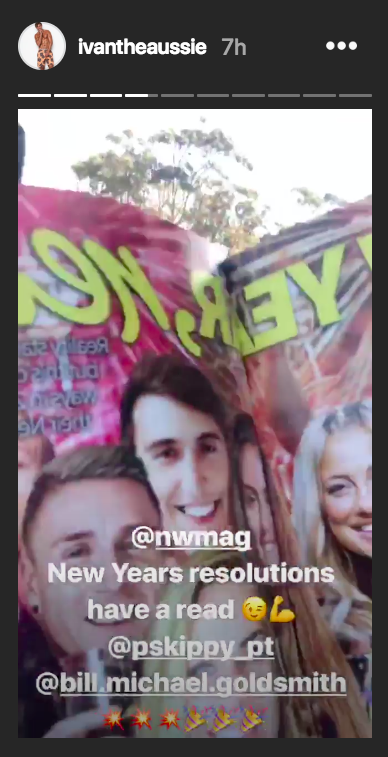 Krslovic was having a Bachelorette-flavoured day today according to his Stories, which showed him heading off on a road trip to the beach at Torquay in Vic, singing and dancing with Rob Colangelo, and then getting some sun and beers with another reality TV buddy, Charlie Newling.

Krslovic back on our tellies: the greatest Christmas gift of all.