BACHIE RECAP: Ciarran Yeets Jess Out Of Paradise With The Subtlety Of A Sledgehammer

Bachelor In Paradise time, babey! For the millionth episode, it feels! We have two more to go after this for the week! I don’t know whether to laugh or cry!

Of course, we come back to Kiki’s Paradise entrance – everyone’s pleased to see her, and she quickly takes each guy off for a five minute chat. It’s pretty clear though that she’s just doing it for show, and she’s mainly keen on Ciarran. Hilariously, they pretend to not know each other?? Even though everyone is 100% aware they’ve boned before?

As Renee says – surprise, shock, surprise when she picks Ciarran for her date.

Meanwhile Jess has possibly retained some sludgy seawater to the brain because she’s going on about how she’s got a connection with Ciarran, he’s been opening up to her, surely he won’t just throw that all away because Kiki has arrived…

Woman, are you forgetting the bit where you walked in and was all “I go for what I want/I want Ciarran/I don’t care if anyone else likes him”? And he just ditched Abbie/Cass/whoever it was and went for her? In like two seconds?

So Kiki and Ciarran go on this date that involves walking down a jungle path, before Kiki gasps in delight like she’s spotted Zac Efron hiding behind some palm fronds. Instead, she’s gasping at… this.

Lady, you cannot tell me the sight of poopy green, definitely shark infested water and a precarious-looking speedboat on an overcast, gloomy day had you gasping with delight. I won’t believe it.

They hop on, which miraculously doesn’t snap the tinnie in two. Kiki grills Ciarran on Jess and Renee. Ciarran reckons Renee wants to try again at their relationship, but he’s not keen. He also tells Kiki that while he had a thing with Jess, the person he really wanted to see in Paradise was her. This all makes him come across as a super stand up, trustworthy guy!

They eventually arrive at this nicer, but not exactly 5-star set up.

It turns out it’s literally a camp site – they’ve been given sleeping bags and some rope or whatever to build a hut, like they’re on Naked and Afraid except less naked and probably more afraid considering that boat fucked off real quick and we have NFI where they are in relation to the resort.

The producers ask Ciarran how he feels about leaving Jess, and he’s like “eh, it’s just sexual chemistry.” OOOFT. Back at the ranch, Jess is… not saying that. She’s upset he’s gone and feels like she’s going to get hurt.

Meanwhile, Keira’s looking for where her rose is going to come from – in true Keira style, she literally SAYS that to Jess. She’s decided on Alex, who she says is cute and has a nice butt. Both worthy reasons.

This is the Keira we love, guys! Here’s hoping that mean Bula Bonanza shit was a one-off.

What follows is absolutely a highly edited sequence where it looks like Keira’s hunting Alex down as prey, but was probably a lot more mutual than it seemed, lol.

And you’ve got to hand it to her, she really does go for what she wants. Even if Alex seems a bit confused as to how he ended up sunburnt with Keira playing “gotcha nose!” 400 times over a few margs. Somewhere else in Paradise, Timm asks Britt to go to the beach with him. He’s set up the tiniest bbq in history.

They sit down to eat some tiny sausages or whatever he’s cooked on the babies bbq, when Timm tells Britt he “has to leave Paradise.”

After a painful ad break, we find out he’s just leaving for a few days to be best man at his mates wedding. Britt’s like:

But adorably, he says he’s only coming back for her, and they eat their tiny sausages and watch the sun set.

Other couples watching the sunset? Mary and Connor, who are at hand-holding stage. CUTE. Alex and Keira, who are making out on some day beds. And Ciarran/Kiki over on one of those international waters islands, or wherever that boat took them.

They’re having a campfire and talking about favourite colours or something. Then they head to bed, and while we don’t see them making out we’re gifted with slurpy kissing noises and Ciarran saying “saucy”. Exactly what I hear when I wake in sleep paralysis!

In the morning they head back to Paradise, after Ciarran tells Kiki he’s gonna dump Jess for her. When they walk in, Ciarran beelines for Timm while Jess d & m’s with RENEE of all people.

Renee is like, I get it, I’ve been the second best woman before – which is pretty harsh but I guess it’s the truth.

Before anything can really kick off though, Osh walks in rubbing his hands with glee. I thought for a second we’d copped a Demon Oshie who’s a messy bitch and loves drama, but it turns out he has NFI love is dead, and instead has a double date card he’s excited about.

It’s for Connor and Jess, who get to take someone each. Connor picks Mary, but Jess asks if she can have a chat with Ciarran first. They go talk for literally two minutes, during which Ciarran’s just like “yeah so I’m here for myself and I don’t like you, sorry!”

Like, come onnnn dude. It’s fine you’ve got feelings for someone else but at least bloody pretend you had some interest in Jess and didn’t just like dry humping when the camera couldn’t see, damn. Jess, to her credit, pulls this epic double finger salute: 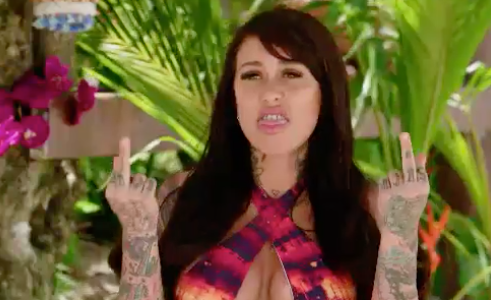 And then choofs off to find Alex who apparently she’s had a crush on this whole time. She literally asks him on the date while Keira’s sitting there like:

So the four of them head to the beach for champagne, while the others in Paradise play truth or dare, which seems to just be “Dare Jamie To Get Punched In The Face Or Have A Grave Accident”. First, he goes up to Ciarran, kisses him on the cheek and tells him he has his rose tonight.

Next, he streaks down to the beach. Everyone hides his clothes so we then cop about 40 slow close-ups of his entire nude body.

Over on the double date, Connor and Mary are getting along so well!!! You go, Aggro Fade!!! What a turn around!! Here we thought you were going to be forgotten like the crustaceans on your seafood platter, left to go sour in the sun. But no, you are finding love you champion.

They’re really fucking cute – even when Mary tells Connor she has a kid (did we know this? I swear I did not know this) he’s like, yeah that’s chill. Not that it shouldn’t be, he just seems really mature and lovely!

I LOVE THIS FOR HER.

Elsewhere, Keira’s stressed to the eyeballs about Alex being on a date with Jess this close to a rose ceremony. She takes her rage out on the swing set.

She goes and tells Ciarran how she’s feeling, who for some reason has taken to wearing a silk scarf around his hair like he’s a 1920s flapper on respite in Palm Springs.

When they both start cackling with glee into their cocktails, especially.

On the date, Alex tells Jess he has reservations about her sudden interest in him. He’s like, you just ended it with Ciarran so WTF. He tells her he’s 50/50 between her and Keira right now – he likes Keira one on one, but in a group setting he’s not sure.

Off to the cocktail party! Jamie is moaning about Timm not being there in his typical mildly-alarming way. Britt’s face sums it up really.

Keira’s panicking about Alex – she tells us she hasn’t had enough screen time yet, lol. I mean – let’s be honest everyone is at least PARTIALLY here for the screen time. We can’t hold this against her. They’re ALL there for screen time.

Jamie’s promised Brittney his rose but when Helena walks in, he’s all “she’s the most beautiful woman blah blah”.

The producers literally do this with his words which is INSPIRED.

Helena is like “oh, I’m fine lol” but is soon forgotten because the double date crew return. Alex takes Keira for a chat while Jess tells us she “doesn’t like being bitchy about girls, but Keira is crazy.” Ok, then.

On their chat, you can see Keira trying to play it cool and also convince Alex to pick her. Alex just looks overwhelmed by all the attention. Keira uses the friendship card on him, saying he has to think about his friendship with Ciarran too. If I was Alex I’d just plop back into the ocean and let the sea take me, to be honest.

At the rose ceremony, all the usuals pick the usuals until we’re down to Alex. He deliberates for 40000 years before picking Keira, leaving Jess and Helena heading home.

I mean, I can’t say I was surprised? Jess’ parting words are “Kiki needs to watch out with Ciarran” and honestly if Kiki isn’t by now aware that Ciarran’s a fuckboy, she is actually just a sea cucumber in heels.

Melissa Mason is the Managing Editor (Sydney) at Pedestrian. You can find her posting sub-par thirst traps on Instagram and tweeting very sporadically on Twitter.