Yesterday, Renee and Kiki Morris appeared on reality TV podcast So Dramatic! to chat about their time on and after Paradise. While Kiki dragged the living piss out of Ciarran Stott, Renee revealed Matt had dumped her via text.

Apparently, Renee and Matt had planned to celebrate New Year’s Eve together in the NT, but Matt broke up with her instead. Renee was very ‘meh’ about it, though.

“He actually broke up with me because he was seeing someone else, so he messaged me,” she told So Dramatic!

“It’s fine, I completely understand, because he is definitely somebody that needs somebody with him at all times,” she said.

Apparently, Matt had moved on with influencer Cheyenne O’Leary, who has some random tie to Married At First Sight, because of course she does. She dated one of the people on it, I think. Matt and Cheyenne aren’t together anymore though, and he’s now dating Love Island‘s Kim Hartnett.

I think that’s how all of this started, because Matt then shared this lengthy Instagram post flat-out denying that he’s ever cheated on anyone.

He said things with Renee ended on mutual terms, and that he only started talking to a “new girl” after he ended the relationship.

“I did not kiss, sleep with or have any relationship with anyone while I was still with Renee or while I’ve been with any other girl for that matter,” he said.

“Maybe I suck at relationships but I’m not a cheater and I deserve to be allowed to find love like every one of you do.”

This guy you seen on your TV is 100% me. I can’t even believe I’m having to defend myself against some click bait media and people wanting their 5 mins of fame, because we finished a show and we are their free ride to self promotion. I did not cheat on anyone I didn’t plan the show, I obviously hoped Renee was going on the show but everything was real. rewatch the emotion in my face the whole show that can’t be faked!!! When we got home I did try, I put my feeling on the line I was vulnerable i was understanding that it had been soo soon after Renee’s last relationship, I was always respectful throughout the whole show towards Renee. We actually ended things on mutual terms. And were excited to be understanding and happy for each other’s future. This still stands to this day me and Renee are friends and happy for each other and wish nothing but luck in love, so please stop believing everything you read or hear have some faith in what you watched on your screen, genuine real emotions. I did not kiss, sleep with or have any relationship with anyone while I was still with Renee or while I’ve been with any other girl for that matter.. I am the genuine guy you saw on your TV screen, My friends and family know that and I am strong enough to stand my ground and know who I am as a person and that is not a cheater. Relationships in the real world after these shows have soo much pressure and it’s not easy but it doesn’t mean I don’t deserve love and respect of a little bit of privacy I am human also. I ask you rethink and look at the guy you seen on your screen and believe that was me! These nasty comments are breaking me into a million pieces knowing I haven’t cheated. Maybe I suck at relationships but Im not a cheater and I deserve to be aloud to find love like everyone of you do.

So then Cheyenne posted a bunch of Instagram stories saying that she doesn’t want any part of this “ridiculous situation” and effectively told Renee and Matt to fuck off. Which look, fair enough.

“I just want my old silent life back which is exactly why I have been quiet for 9 months watching these fools,” Cheyenne said. 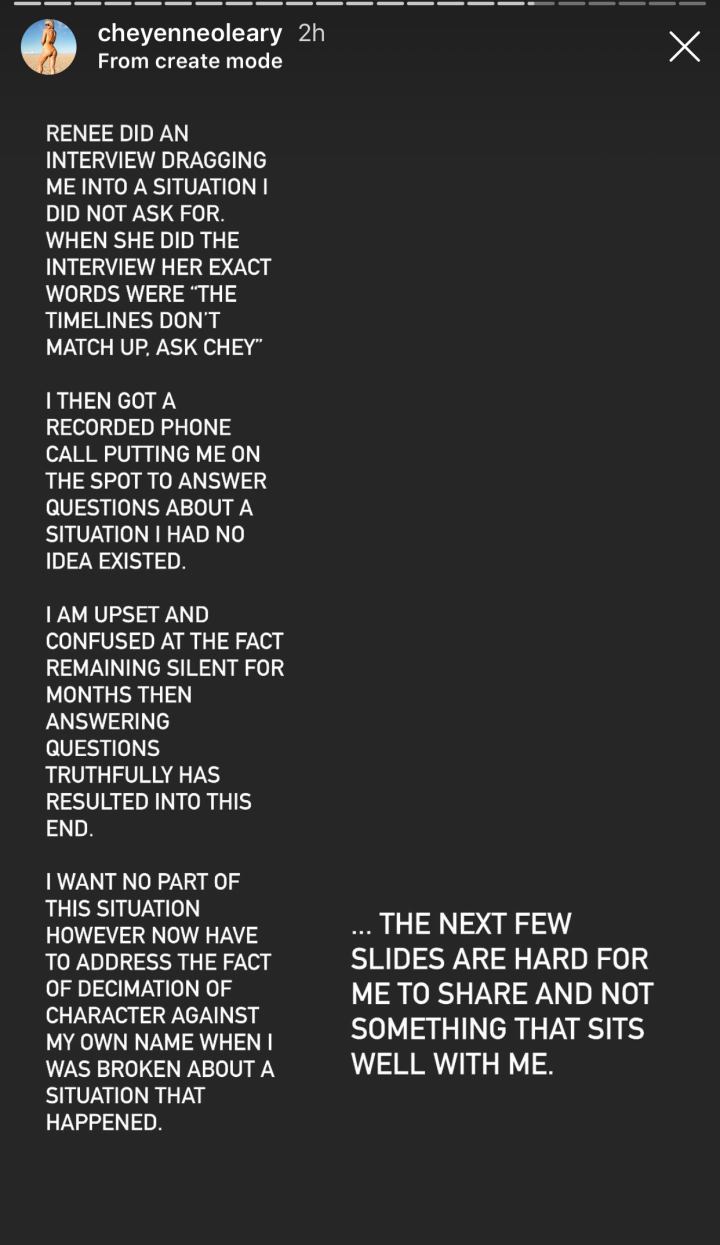 In the next slide, Cheyenne shared a DM between herself and Matt proving they had spent New Year’s together.

She also shared a screenshot of a DM between herself and Renee. This part’s messy as hell, but the gist is that Matt apparently told Renee that he still had feelings for her even though he was already with Kim at that point.

“And he hasn’t even told Kim that he stayed at mine hahaha. Such a wanker,” Renee wrote.

Cheyenne captioned the screenshot, “Both preach anti-cheating yet…”

“Proof of the real reality, I feel disgusted in myself that I have to stoop to this level to remove myself,” she added. 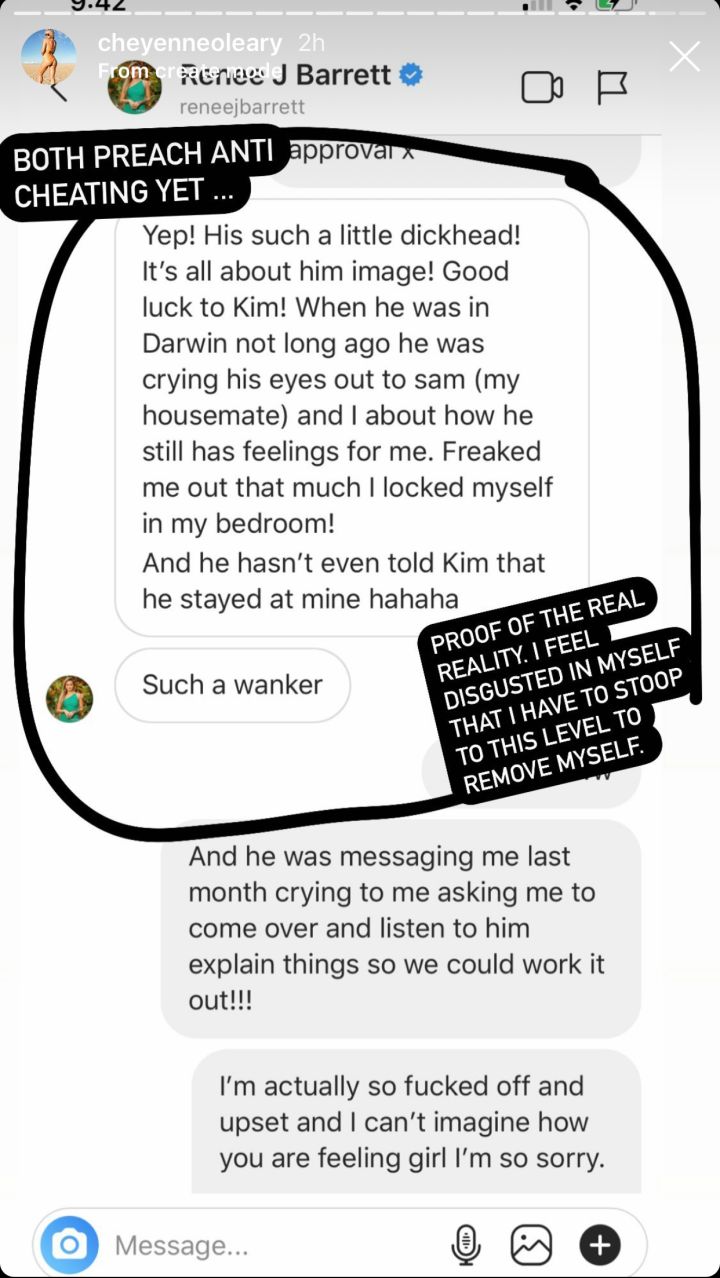 In a follow-up post, Matt again vehemently denied he had ever cheated on Renee, or anyone for that matter.

He said he broke up with Renee mid-December, so there’s no reason to think he cheated on Renee during New Year’s.

“I have not cheated, I was single mid-December 2019 so stop the bullshit fake cheating attacks on me,” he said.

I broke up with Renee around the 12-13th of dec. So talking to a new girl late Dec an hanging out New Years isn’t cheating. I ended things with Renee because I felt I was way more invested then she was and I was ready for more! Her friend msg me trying to make things right but I was just wanting to go my own way. They tried and tried to get me to come to Darwin as just friends and hang out with the whole group but I never got on the plane. I have not cheated I was single Mid December 2019 so stop the bullshit fake cheating attacks on me. I have no access to msgs from Renee for some reason so this is the best I’ve Got. I didn’t break up her via text on Christmas or what ever they have been saying. Myself and Renee had many many phone conversations We were broken up around 12-13th of dec

And I think, I think, that’s where we’re at right now.

Nope, I lied, because Renee has shared a very brief response to whatever this is.

On her Instagram story, over an image of the So Dramatic! podcast, Renee said that everything “from me and Chey” is the truth.

You’d think we’d all have a two-day break between Paradise and The Bachelor, but nOoOoOoOo.

So Dramatic! has been working behind-the-scenes to sort everything out between Renee, Matt, and Cheyenne.

“They have all sent me messages, too many to post. It is beyond messy now and even I am overwhelmed. And I don’t have time to be Judge Judy full time right now.”

Guys, I need to be serious for a minute now. Please remember that what you see on TV and on social media is only about 2% of the whole story. I am not trying to create more drama for the sake of it (I don’t need to). In fact, over the past 12 hours I have actually been working behind the scenes to diffuse the drama and mediate between all parties fairly. I have spoken to @reneejbarrett @cheyenneoleary and @mattwhyatt (and others) at length about this situation. They have all sent me messages, too many to post. It is beyond messy now and even I am overwhelmed. And I don’t have time to be Judge Judy full time right now. Everything that the girls said in the podcast is their account of what happened. Renee decided to defend Matt last night because she is a good human and wanted to put a stop to the negative comments he was getting. She still 100% stands by what her and Chey said. There is more evidence to back it up but we could be here until Christmas and it’s becoming toxic now. I am going to let you make your own conclusion on this one and share a post on my story from each party and then close this case because I have to focus on putting together the next episode. Yes I am here to spill tea and I will never apologise for that. This page is not a witch hunt for any particular person. I am still friends with Ciarran, Jamie and everyone else I have talked about who I was friends with prior to the podcast. They understand what they sign up for when going on these shows and they know having their personal lives examined is part of it. My job is to report on the shows and the people on the shows. And that is what I will be continuing to do here ????