A hideous purple beast washed up on a New Zealand beach earlier this week, and while you’d be forgiven for thinking the only awful purple beast in existence is McDonald’s mascot, Grimace, this certainly wasn’t him.

Adam Dickinson, who snapped the wild photo below, stumbled across the gross quivering blob with his kids, telling them to keep the hell away from it. I mean, you would too, look at that son of a bitch. What demon spawned this horrific creature? Christ, have a look at it, would you? 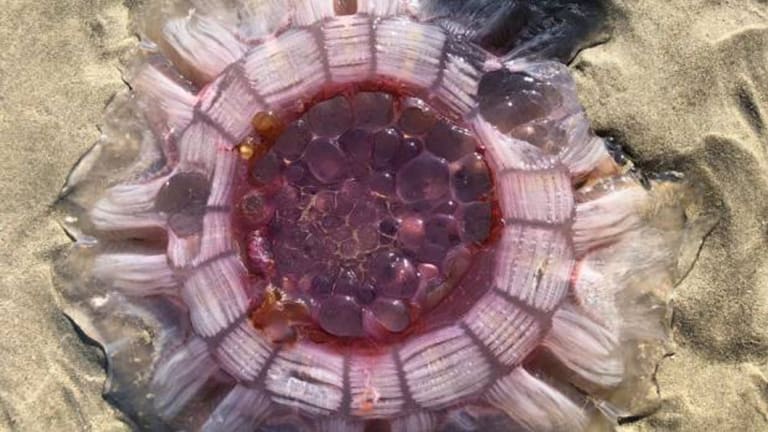 “It almost looked like a load of muscles contracting,” Dickinson told Yahoo7. Gross.

That enormous nipple-looking motherfucker is actually a jellyfish. It’s called a lion’s mane jellyfish, but most people just call it a “giant jellyfish” because, well, I’m sure you understand. That thing is massive. In fact, these things can grow to be as large as a blue whale, with their tentacles reaching as long as 57 metres and a diameter as wide as 1.8 metres. It is quite literally the world’s largest jellyfish species.

These suckers usually hang around where the water is cooler in the Arctic or Pacific Oceans.

“Its ‘mane’ of long, hairlike tentacles hanging from the underside of its bell-shaped body is the inspiration behind the lion mane’s common name,” international conservation organisation, Oceana, wrote in a blog post. “The mouth is situated on the belly’s underside, surrounded by tentacles that are divided into eight clusters of up to 150 tentacles each.”

While they tend to eat mostly microorganisms and small fish, their tentacles are apparently capable of one helluva sting, so if you ever come across one of these hulking bastards, it’s best not to touch it.

And if video games have taught me anything, it’s that jumping on one of these will send you flying into the air, just like 1998’s amazing first-person shooter, Half-Life.