I don’t remember everything about the TV I watched as a kid, but the emotional response provoked by the recollections that I do have seems to indicate a pretty strong central theme: horror. For some reason, a lot of the TV shown to Aussie kids in the 90s seemed to have a weird dark undertone, all existing on a spectrum that ran from ‘gross’ to ‘terrifying’.

Sure, a lot of it was harmless nonsense: Albert the Fifth Musketeer was about a tiny comical Frenchman who had a gun that fired spaghetti, the Big Knights was about two knights who were very, very big. But then you have shit like Plasmo.

I honestly could not tell you what Plasmo was about from memory, all I remember is the abject terror I experienced every time this one-eyed, vulva-mouthed cretin claymationed his disgusting head into the frame. Watching it again today, I was somewhat taken aback at the realisation that Coredor (the flap-faced beast pictured above) doesn’t communicate in a series of horrifying, damp grunts, instead speaking English with an accent that sounds very much like the average Australian uncle.

The show was 13 five-minute episodes of deep, deep weirdness. Episode 8 of the show was almost entirely dedicated to the aforementioned one-eyed bastard explaining to the other characters that he was unable to bond with his mother because he was raised in an isolation chamber. The part of the episode that’s not that is one of the characters getting their gooch out.

This at least is kind of easy to explain. The show was something of a labour of love from independent creator Anthony Lawrence, clearly he wanted to make something weird and interesting and he totally did, whether or not it was ideal for children is neither here nor there. Some of these childhood nightmares are a bit harder to quantify, though. Let’s talk about Johnson and Friends.

Johnson and Friends was about the adventures of a group of magically animated toys and also, inexplicably, a hot water bottle. Was there an anthropomorphic genital dealing with the emotional scars inflicted by an incomplete relationship with its mother? Unlike Plasmo, no – but somehow it still creeped me the fuck out.

For years and years, I was never able to sufficiently explain why this otherwise innocuous show made me feel so deeply uncomfortable. Was it because the accordion was unable to articulate its face in any fashion and thus wore a perpetual death mask-esque rictus grin? That certainly contributed, but no, that wasn’t it.

It wasn’t until only recently that the missing piece of the puzzle was revealed to me.

Nothing looks right because it isn’t. We might consciously accept it, but our subconscious knows that the perspective is wrong, that the actions of these toys violate our understanding of movement, physics, and scale. In a way, we intuitively understood that this farcical show was played out by real humans and it felt just… wrong.

Let us briefly return to the topic of completely fucked-up looking aliens. It’s time to talk about Pig’s Breakfast. The name didn’t ring a bell for me, but the sights and sounds of two horrifically hideous-looking aliens screaming incomprehensibly at children as they undertook the operation of a TV show have never quite left my psyche.

Pictured: Mate, come on. Not the squid.

Grob, the big unit depicted above hungrily foisting someone’s best mate into his gob, was by far the most obnoxious of the two in terms of volume and belligerence, but the disconcerting appearance of his companion Meeba nearly approaches Mac and Me levels.

Pictured: No matter how seductive its lips are, I hate this creature with my life.

But, of course, not all the horror was that ham-fisted. Instead of rubbery alien nightmares, the show Lift Off opted for a more subtle aesthetic of terror in the vein of Slenderman. Say hello to EC, the puppet without a face.

Pictured: A child offering its blood to Yothugg’Sa-Met, the Dead God.

I’m certainly not an expert on the subject of character design for children’s television, but it’s just my gut feeling that if you’re going to give something a head, you should probably give it a face. Jesus Christ. Speaking of things that shouldn’t exist: fuck to the Bookworm. The segmented host of The Book Place sported a face that had the glinty eye and reflective face of someone that could only possibly be up to no good. Look at this cunt. 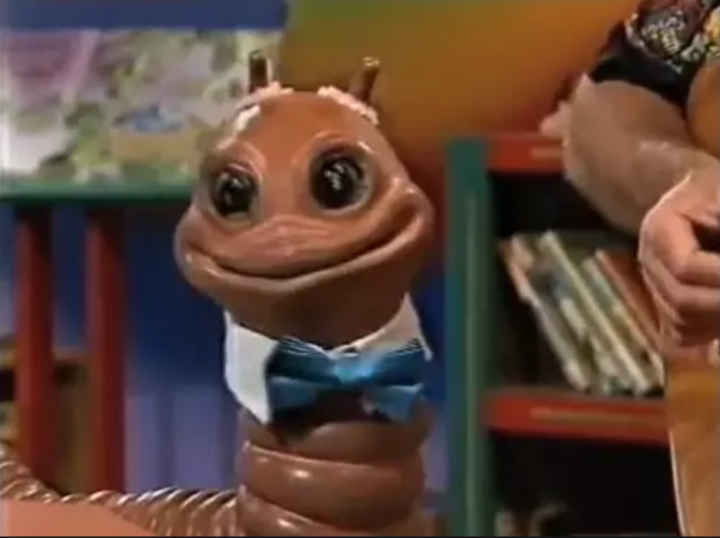 Pictured: “Hello children it is time to die.”

Christ. No thank you.

The terror didn’t stop there either, between the shapeshifting plasticine horrors of The Trap Door, the weird piss demon thing from Round the Twist, and the yellow gremlin from In The Box, it’s a miracle that I turned out normal. I can’t speak for you.

Pictured: Please, stay down there next time. Let us lock it from the outside.