Remember last year when it was alleged that disgraced actor Armie Hammer was linked to disgraced RHOBH star Erika Jayne?

An anonymous tipster told celebrity tea-spilling Instagram page @DeuxMoi that Erika’s new home is next door to none other than Armie Hammer.

The anonymous and unverified tip reads: “Erika has been living next door to Armie. We were like ‘OMG’ all summer because she would be outside at her pool and could hear Armie having loud outdoor sex. She’d be outside with her kids and hear it.”

[Editor’s note: Real Housewives stans will know that Erika only has one adult son. According to a subsequent tip to DeuxMoi, the woman with kids refers to a “prior neighbour” who had kids and would allegedly overhear Armie engaging in loud sex].

The reports pretty much died down soon thereafter, but savage-ass Sutton has resurrected the tea in an interview while promoting the new season of RHOBH.

Speaking to Access Hollywood, Sutton addressed a viral Insta video in which Erika threw a copy of co-star Garcelle Beauvais‘ memoir in the bin.

“When I started this show, one of the things that intrigued me the most and actually enlightened me the most and inspired me the most was that it was a group of women that were supporting each other and to see someone throw a book in the trash that a castmate had worked on for so long was completely disrespectful. There’s no other word for it, but disrespect. And she should be ashamed of herself,” Sutton said.

“If you don’t want to read it… Go give it to that neighbour. Who’s her neighbour? That man that eats people?”

Fans have interpreted this as a reference to Armie Hammer.

In the first episode of the new season of RHOBH, Erika revealed she has a secret admirer who sends her flowers (AKA knows where she lives!!!).

She also said she’s been “having some really good sex.”

“I’m back in the dating pool, but I’m much more interested in having really good sex with nice people,” she said, adding: “And maybe some not-so-nice people.” (!!!)

Part of the OG theory involved a screenshot from Armie’s alleged finsta that appeared to show someone bearing the resemblance of Erika. 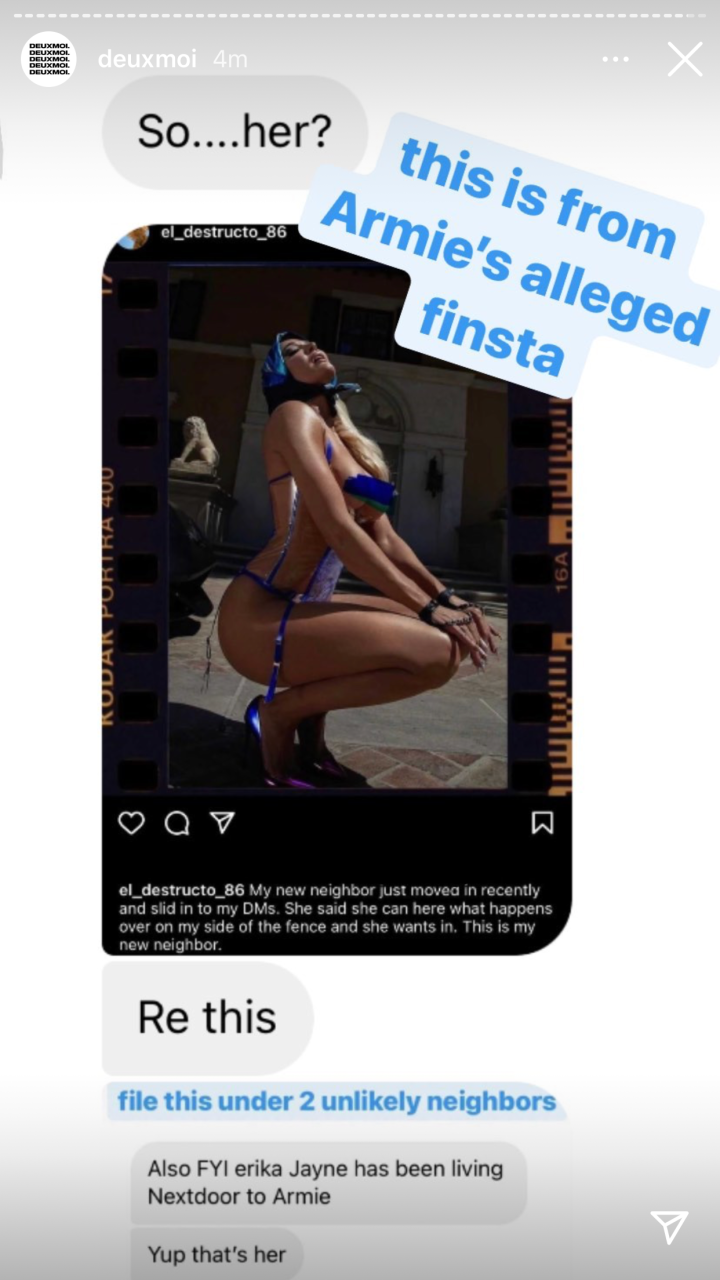 The caption read: “My new neighbour just moved in recently and slid into my DMs. She said she can hear what happens over on my side of the fence and she wants in. This is my new neighbour.”

A Beverly Hills-based influencer also corroborated the story that the two stars were involved.

Peep the video below:

This has not been verified by Armie or Erika.