It was recently reported that Hammer is now “broke” and working as a timeshare salesman in the Cayman Islands.

It was later reported by Vanity Fair that actor Robert Downey Jr. had taken Hammer under his wing and was assisting him through his rehabilitation and providing financial support.

A source alleged to the publication that Downey Jr. paid for Armie Hammer’s stay at the Guest House, an expensive Florida rehabilitation centre.

The Guest House describes itself as a centre that “cater[s] in particular to clients who have high-stress or high-visibility lifestyles such as business executives, politicians and entertainment professionals.”

Speaking to The Daily Mail, Chambers confirmed Hammer was staying with Robert Downey Jr. and said “everybody needs help.”

The publication added that Chambers also seemingly confirmed reports that Downey Jr. had helped pay for Hammer’s stay in rehab.

She also insisted that her husband was in a good place.

“Everything is good,” Chambers said, although she declined to comment on whether Hammer had been selling timeshares while in the islands.

“I really couldn’t talk about that,” she said, “But I think he’s happy and that’s good.” 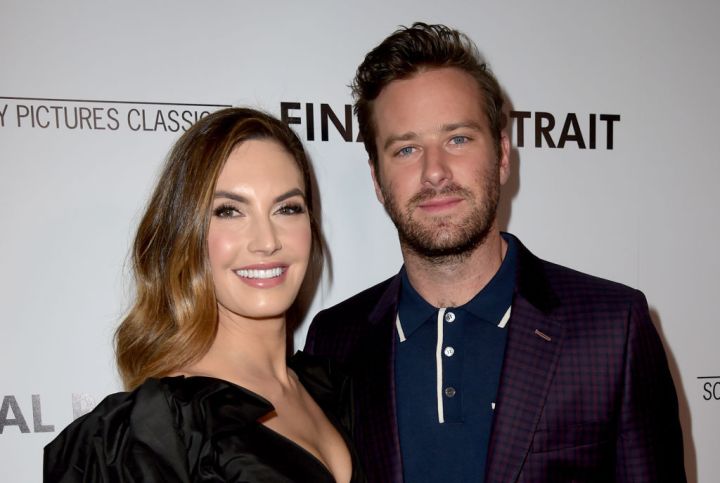 Elizabeth Chambers with Armie Hammer at an event in 2018, two years before the allegations levelled against him. (Credit: Getty)

Hammer and Chambers separated in 2020 after the allegations surfaced, although they have remained close throughout his recovery period.

“I think everyone is always going through a process,” she said in response to Hammer’s progress following rehab.

When asked if she thought Hammer would ever return to acting, she said she was the wrong person to ask.

She said all that mattered to her was how “amazing” he was with their kids.

“I’m probably the wrong person to ask that,” she said. “All that matters is family and our kids.”

It was recently rumoured that Hammer was working at a hotel resort in the Cayman Islands after a flyer began circulating on social media that depicted Hammer as a hotel concierge.

The flyer, which was shared (and later deleted) by the verified Twitter account of producer Muna Mire, included a photo of the actor. 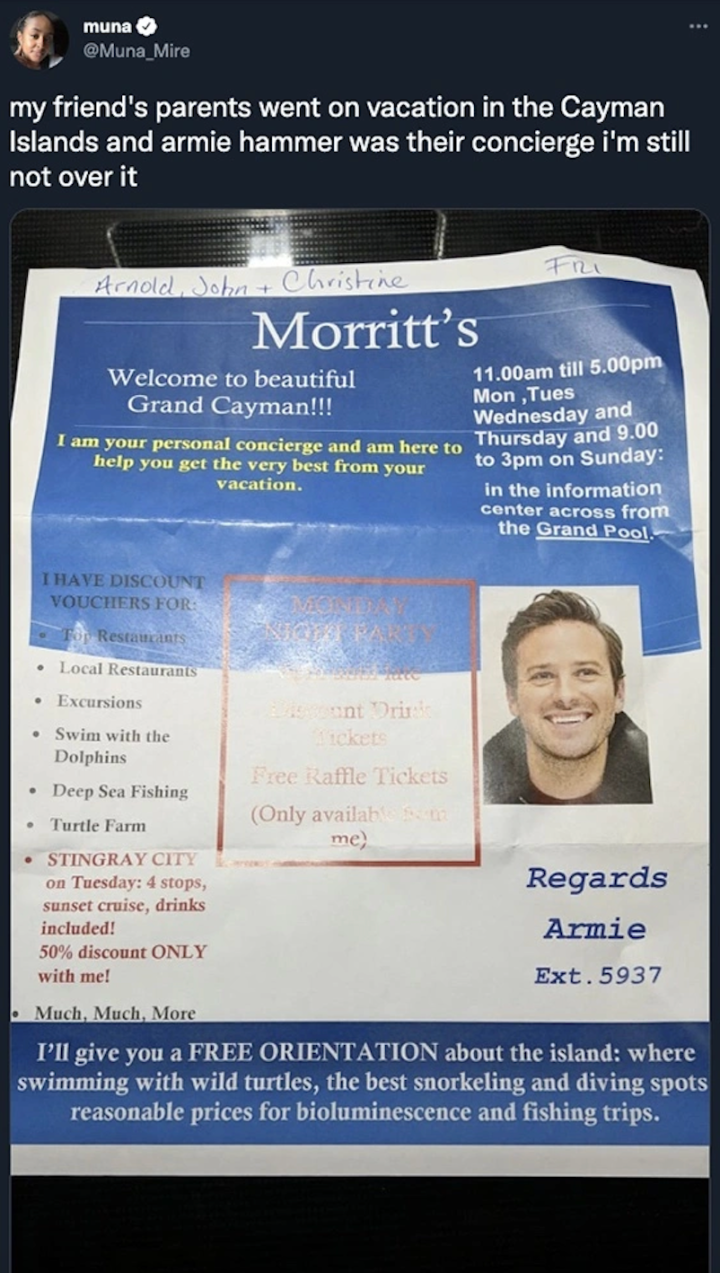 The hotel insisted to various media outlets that Hammer did not work for them, but then photos were published of Hammer appearing to be dressed in uniform, working at the resort.

Now, an insider has told Variety that Hammer is selling timeshares at a hotel in the Caymans and reports claiming otherwise are BS.

From smooching Timothée Chalamet to selling *checks notes* timeshares? Oh how the mighty have fallen.

Apparently the actor has hit rock bottom and is desperate for work to support his family.

“The reality is he’s totally broke, and is trying to fill the days and earn money to support his family.”

The source added that prior to working as a timeshare salesman (*shudders*), Hammer was managing an apartment complex in the Cayman Islands, which also sounds dull as dogshit.

Turns out he’s living there to remain close to his two young kids who have been residing in the Caymans with Chambers.

It comes after Hammer’s stint at a treatment facility that followed his fall from grace.

Last year, Hammer was called out by several women who shared the graphic DMs he had allegedly sent them.

The screenshots appeared to show Hammer speaking to the women in a way that was abusive, domineering and violent.

Head here for a full timeline of events.