Earlier today, it was revealed that Ariana Grande got hitched over the weekend to her quarantine boyfriend turned fiancé Dalton Gomez.

An insider described the gathering as “tiny and intimate,” adding, “There was a lot of love and everyone is really happy.”

Another source told the publication that Ariana and Dalton’s carefully devised wedding guest included “close family and friends. As the insider shares, “It was a beautiful day and very romantic. Everyone is happy for them. It was perfect and just what Ari wanted.”

Now, we’ve copped a bunch more tea from mates of Ari’s neighbours as well as a friend of her maid of honour (who remained nameless), via goss monger Deuxmoi.

A mate of Ari’s neighbour wrote in to Deuxmoi, claiming they spotted some intriguing activity at the Haus of Grande over the weekend.

“My best friend’s mom lives next to Ariana Grande in Montecito… Ariana got married this weekend at her house,” a Deuxmoi tipster wrote.

“They brought in a lot of hedges and noise cancelling equipment.” 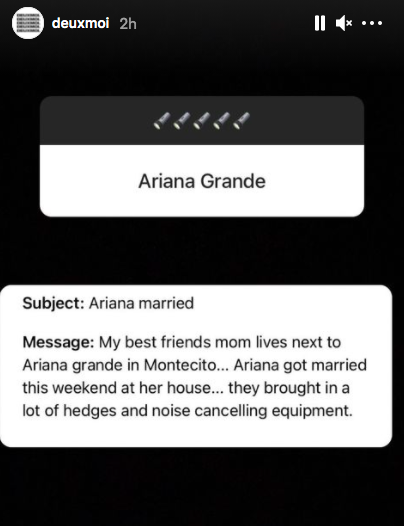 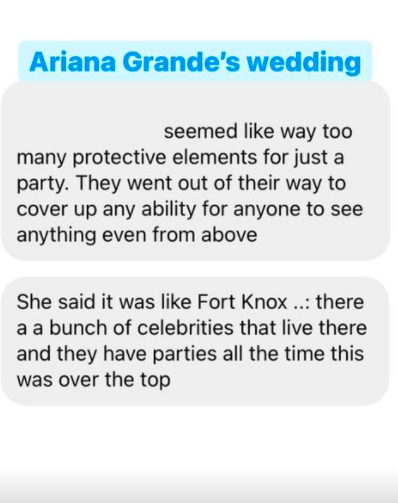 Another tipster added, “There seemed like way too many protective elements for just a party. They went out of their way to cover up any ability for anyone to see anything even from above.

“She said it was like For Knox… There were a bunch of celebrities that live there and they have parties all the time, this was over the top.”

The thirsty fan then went further (bless them) and gave their mate a call to get the tea and this person is our kind of people.

“Just got off the phone and she didn’t see any other celebs but she did say her street was packed and they brought in all this temporary foliage and trees to make it impossible to see into the property at all,” says the source.

“They also played amplified bird sounds projecting out into the street for a sound barrier. She also said a skinny woman with nervous energy was running around directing deliveries earlier in the day. Festivities started at around 4pm until very late.”

There was also a tip from someone who knows the maid of honour (!!). Apparently it was “very much an inner circle event” and I wonder if this includes any celeb pals, hmmm? 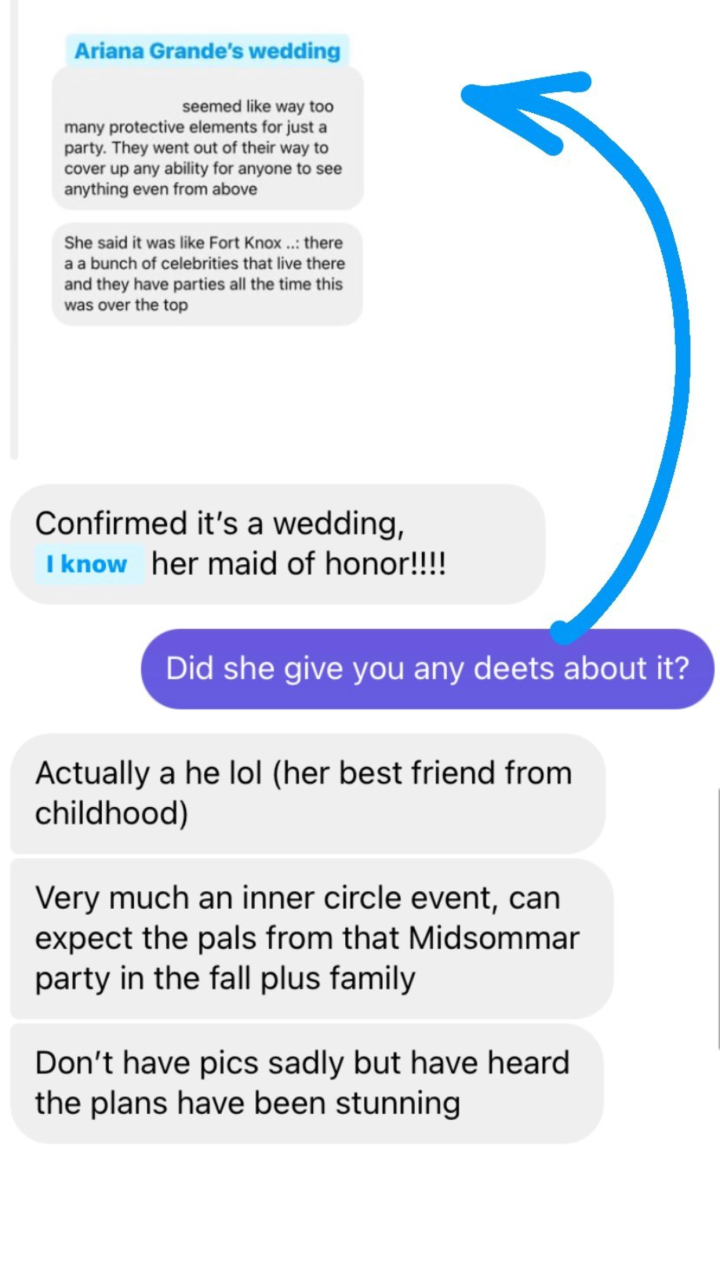 According to PEOPLE, Ariana Grande started to get serious with her boyfriend-turned-fiancé Dalton Gomez while quarantining together during COVID.

The pair began dating in January. As they spent time together at her home in New York City in March, when the coronavirus crisis hit the U.S., “she realised he is very special,” says an insider. When Gomez, a luxury real estate agent, returned to Los Angeles for work, Grande followed, and the rest is history.

Congratulations to the happy couple.