When you think of the words Ariana Grande‘s birthday party, what comes to mind? Surely the first word is ‘extravagance’ and maybe ‘luxe’, but extremely not ‘probably a clown doing face painting in the corner.’

For her 26th birthday this week, Ariana the Cancerian was performing in Toronto, where her parents halted everything mid-show to get the whole stadium to sing her happy birthday, and the arena’s staff used the time she was preoccupied with performing and singing to the masses to transform the backstage area into something that resembles at least five birthday parties we all attended as kids.

Happy birthday, @arianagrande! Hope you enjoy the old school “kids-themed” birthday party we set up for you in catering backstage ???????? #SweetenerTour pic.twitter.com/WHNSJ2xf5T

Now, look at this. Look right at it. That ~party~ looks like it’s two seconds away from someone busting out a piñatra full of Minties. Literally, all it’s missing is a plate of fairy bread stacked high to the heavens and someone crying in the corner over a dropped sausage sandwich. Maybe at least one kid about to have a vom from eating too much too quick, or a younger sibling throwing a full-blown tantrum because they didn’t get to blow out the candles.

Where’s the table set up with plaster painting? Where are the lolly bags filled with jubes, ghost drops, and chocolate freckles? 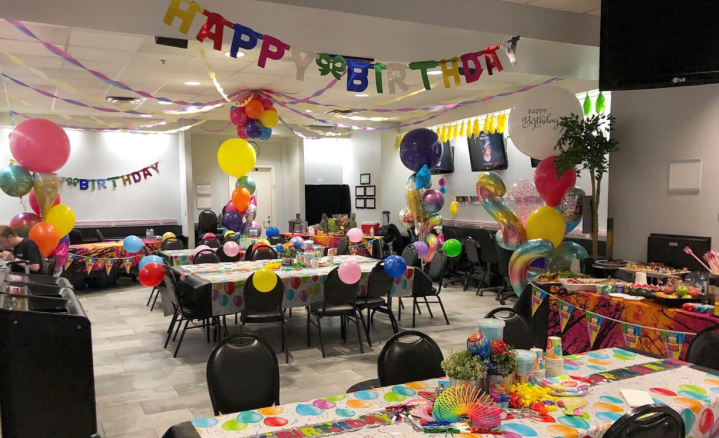 Mind you, if someone put this together for me for my 10th birthday I would have 100% shit myself with excitement. In reality I had that birthday at Ulladulla Funland (before it sold out to Timezone) so it probably didn’t look too different to this. Maybe just more shiny party hats and screaming kids wanting to go on the dodgems again.

This deeply 90s birthday soirée aside, at lease Ari copped a pearler of a birthday greeting from Larry King, of all people.

Happy Birthday @ArianaGrande! Did you know I take 2 sweeteners in my coffee?