Ariana Grande has found herself in hot water over comments directed at musician Princess Nokia who accused her of plagiarism.

In an Instagram video that has since been deleted, Nokia compared Grande’s new song ‘7 Rings’ to her 2017 song ‘Mine’, from the album 1992.

Nokia then paused the music and said, “Wait, ain’t that the little song I made about brown women and their hair, mmm, sounds about white.”

Grande was tagged in the caption.

Dear #ArianaGrande: the girl #PrincessNokia thinks your new song sounds way too familiar ???? -I hear it sounds like some #SouljaBoy too ???? www.honeygerman.com

The 25-year-old pop star initially responded with a now-deleted Instagram Story where she defended her use of the lyric.

“You like my hair? Gee, thanks, just bought it!!!! White women talking about their weaves is how we’re gonna solve racism,” she wrote.

Grande fans were upset by the singer’s problematic response and called her out on social media.

“It takes a white person to make weave ‘cool’ or ‘positive,’” one commenter wrote. “And her statement just trivialized how complex racism is. White ppl always think taking things from our culture and trying to make it hip and trendy and ‘theirs’ is going to ‘solve racism.’”

“Yeah, that rubbed me the wrong way,” another wrote. “She was better off not even saying that.”

This #PostAndDelete by #ArianaGrande has fans upset because they feel she’s missing the point of the backlash. Meanwhile, #ScooterBraun says #7Rings has hit a record on #Spotify (See previous posts)

Ari later clarified her statement and apologised for offending fans, maintaining that it was not her intention.

“Hi hi,” she wrote. “I think her intention was to be like … yay a white person disassociating the negative stariotype[sic] that is paired with the word ‘weave’ … however i’m so sorry if my response was out of pocket or if it came across the wrong way. thanks for opening the conversation and like … to everyone for talking to me about it. it’s never my intention to offend anybody.” 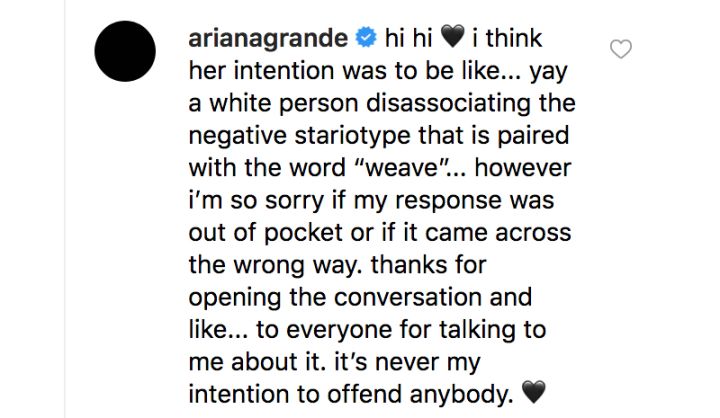