The ~Rumoured~ Salaries Of The SATC Gals Have Leaked Online & Wow, That’s A Lot Of Manolos

We’re just one day out from Sex and the City revival And Just Like That dropping into our hot little hands and in the lead-up to its release, a whole heap of tea has been spilled.

First, Chris Noth (a.k.a. Mr. Big) slammed the “nasty” feud between his long-time co-stars, Kim Cattrall (Samantha Jones) and Sarah Jessica Parker (Carrie Bradshaw). Now, the salaries of the returning cast has leaked online and our girls do be getting that bread, sis.

The sneaky peeps at Variety have revealed how much each of the main gals is reportedly copping to reprise their roles in the stylish and sexy as hell series.

Fans of the show will be happy to know that in the spirit of true sisterhood, all three leading ladies are copping the same figure per episode.

However, there’s been other reports claiming that the salary could be around $1 million per episode. We love to see it! 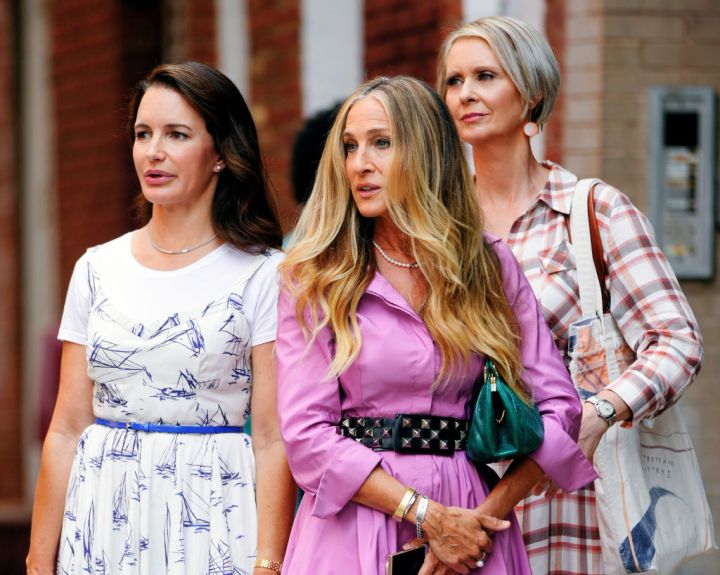 Kristin Davis, Sarah Jessica Parker and Cynthia Nixon in And Just Like That. (Credit: Getty)

Dollarydoos has always been a controversial topic in the Sex and the City universe, and not just because there’s no way in fucking hell that Carrie would’ve been able to afford that apartment on a columnist’s salary.

I’m talking real-life shit, dating all the way back to the noughties. Apparently the pay sitch is part of what sparked the almighty feud between Kim Cattrall and SJP, and the “tension” between Cattrall and the other two ladies.

A report in the Telegraph addressed the rumours that there were “tensions” between the cast over $$$. Because Parker was given an executive producer title back in the second season, her salary went up to $300,000, prompting Cattrall to reportedly negotiate for a higher salary.

Crew members told the publication that the ladies were not happy about this and “wouldn’t even sit with [Cattrall] at mealtimes.” Yikes…

The argument has always been that since SJP is the executive producer and lead star (she’s in the opening credits and narrates the damn thing, after all), her higher salary is warranted.

But Cattrall has reportedly argued that the salaries should be equal among the ladies. Welp, it looks like she finally got her wish, but sadly she’s no longer part of the cast. Painful irony, isn’t it?

Anywho… And Just Like That is set to land on Binge and Foxtel from tomorrow (the same day as the rest of the world, thank god). You can catch up on the original series there before it lands, if you’re up to the challenge