Apparently A Very Famous Actor Gets Pegged On AJLT S2 & Finally, I’m On Board With This Show

Welp, it’s official: The controversial Sex and the City revival, And Just Like That, is coming back with Season 2, whether yas like it or not.

Here’s everything we know about the new season that no one asked for but everyone will be watching.

What will happen in And Just Like That Season 2?

The plot deets are very minimal at the mo, but we’ve just copped some tea about a particular spicy scene via Deuxmoi.

Apparently a lead actor from a hit show is gonna star in the second season and we’ll see the dude get pegged.

To quote Kath Day Knight: “I loike what I soiyee!”

Have a read of the blind below: 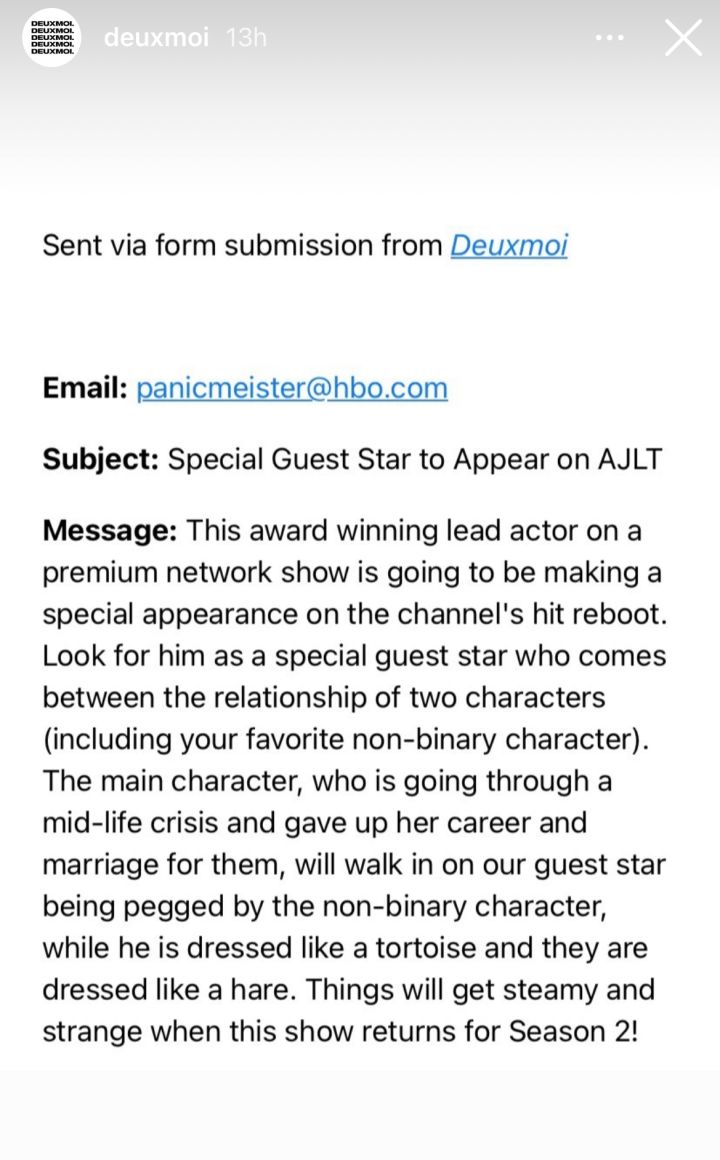 It seems so bloody ridiculous, but given the campy nature of the show, it wouldn’t surprise me if all these details are bang-on (no pun intended).

I mean, they’re just too specific!

All your faves are returning for the second season, including Sarah Jessica Parker as Carrie, Cynthia Nixon as Miranda and as Kristin Davis as Charlotte.

No word on the blokes, besties and bubs just yet, so stay tuned.

And some of your not-so faves are also returning.

Showrunner Michael Patrick King recently revealed that we’ll be seeing a lot more Che Diaz in And Just Like That Season 2.

“I want to show the dimension of Che that people didn’t see, for whatever reason — because they were blinded, out of fear or terror,” he told Variety.

“I want to show more of Che rather than less of Che. Like, really.”

Honestly, I’ll never forgive the show for teasing us with an epic non-binary character played by none other than the legendary Sara Ramirez, then ruining it with awkward-ass scenes and shitty dialogue.

There’s also a red hot rumour that Jennifer Hudson might be reprising her role as Louise from The Sex and the City Movie in And Just Like That Season 2.

A sneaky source wrote in to Deuxmoi and claimed that the beloved character is being “considered” for Season 2 but the “innocent girl from St. Louis that Carrie met is gone gone.” 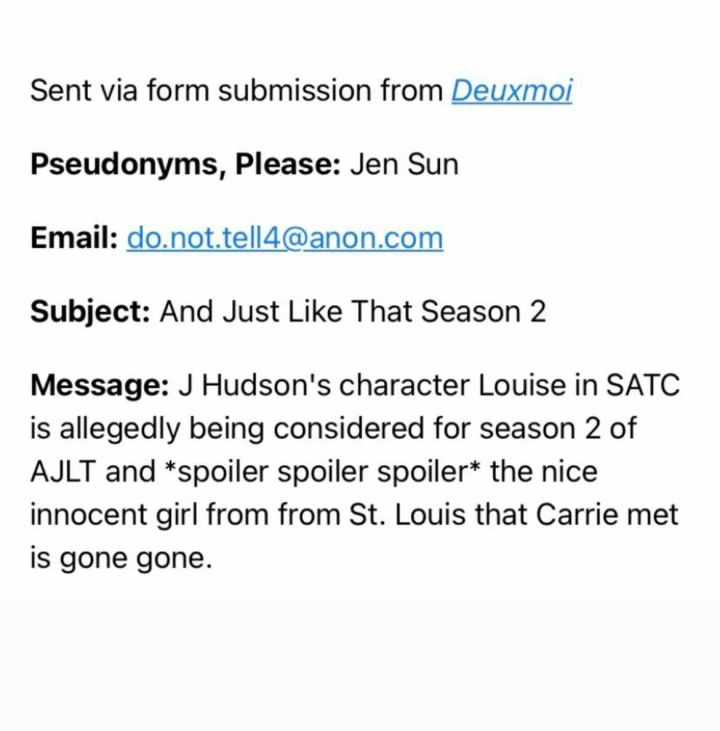 Will Samantha return in And Just Like That Season 2?

Michael Patrick King coyly talked about the return of iconic hornbag Samantha (Kim Cattrall) in a recent interview with Variety.

He said he doesn’t want to give away too much just yet but is working towards his goal of getting the Sex And The City gang back together again somehow.

“One of my big rules is don’t tell things until they’re real.”

A post shared by SEX and the CITY 💗 (@sexandthe_city)

Not sure how you’re going to get that done when Kim Cattrall seems to have wiped her hands clean of the show.

It’s not the first time Samantha has been “in” the revival, though. Her character was somewhat featured through the back and forth texts as a way to keep Samantha alive. A smart play that I must respect.

So perhaps it’s more bulk texts in season two. Guess we’ll have to wait and find out.

When asked by Variety in a previous interview if there was any chance of Kim Cattrall returning for Season 2, he responded: “No. Just like there was no thought that Kim would ever participate in And Just Like That, because she’s said what she had said.”

He added, “The only place I participate in magical thinking is in fiction. You take people at their word.”

“I have no realistic expectation of Kim Cattrall ever appearing again,” he said. “You take people at their word, and you’re a smart producer — you don’t back yourself into a corner.”

He went on to discuss the idea of keeping the character of Samantha alive in And Just Like That, despite the actress’ refusal to take part.

“It was a big day for me as a writer when I realised that even though Kim Cattrall didn’t want to be in the series, Samantha could be — because of texting,” he told Variety.

READ MORE
And Just Like That, Kim Cattrall Has Broken Her Silence On The Reboot In A Scathing Interview

When is And Just Like That Season 2 airing in Australia?

Your guess is as good as ours at this point, so stay tuned!

Where can I watch And Just Like That Season 2?

When it finally becomes available, it’ll be on BINGE and Foxtel which, BTW, also has And Just Like That Season 1 and the entirety of Sex and the City for your viewing pleasure.