CONTENT WARNING: This story discusses instances of sexual assault.
At PEDESTRIAN.TV, we independently choose and write about stuff we love and think you’ll froth too. We have affiliate partnerships so we might get a bit of money from any purchase you make based on our recs, cool? Cool. FYI - prices are accurate and items in stock at the time of posting.

The And Just Like That finale trailer is here and it centres on Mr. Big (Chris Noth), despite his final scenes being cut.

Sex and the City star Cynthia Nixon previously confirmed reports that Chris Noth was removed from the And Just Like That season finale following the multiple allegations of sexual assault levelled against him.

“I think we were very lucky that those changes were able to be made and I think we are very proud of our show,” Cynthia (Miranda Hobbes) told Entertainment Tonight.

“He died,” Carrie (Sarah Jessica Parker) says in the teaser. When asked where Big’s remains were kept, she responded: “Next to my very best shoes. I need to think more about where John might want to be.”

“If you’re trying to reach me, blink,” Carrie says while sitting in her NYC apartment. After a light mysteriously turned on when she had flipped the switch off, Carrie tells Miranda Hobbes (Cynthia Nixon) and Charlotte York-Goldenblatt (Kristin Davis): “I know where he wants to be.”

The trailer ends with Carrie facing the camera and seemingly noticing a bright light before the video fades to black.

TVLine previously reported that Noth’s character Mr. Big was set to appear in the finale “in a fantasy sequence where Carrie reunites with Big while visiting Paris’ Pont des Arts bridge to scatter his ashes”.

But following the allegations, the scene has been cut from the finale episode of the controversial revival series.

What’s more is that apparently And Just Like That Season 2 discussions have been halted as a result of the allegations.

“There was talk about doing another season, but after the past few days, all those conversations have stopped,” a production source told Us Weekly. 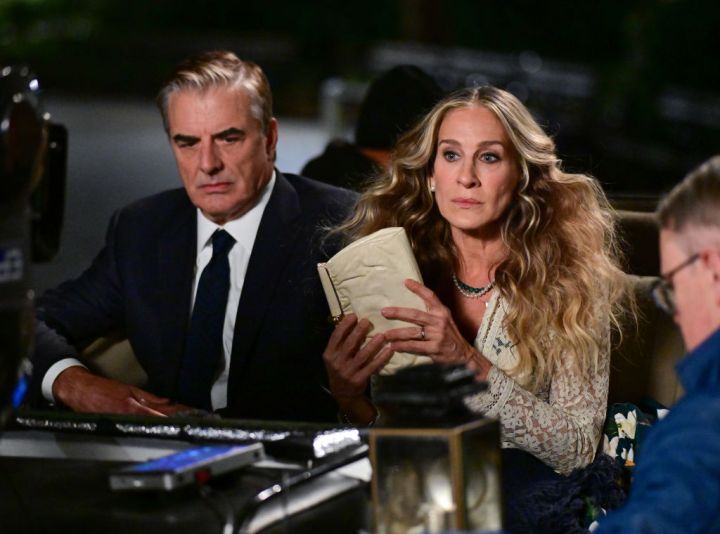 Chris Noth alongside Sarah Jessica Parker on the set of And Just Like That. (Credit: Getty)

A total of four women have come forward and accused Chris Noth of sexual assault. Noth has denied the allegations in a statement to the publication: “The accusations against me made by individuals I met years, even decades, ago are categorically false. These stories could’ve been from 30 years ago or 30 days ago — no always means no — that is a line I did not cross. The encounters were consensual. It’s difficult not to question the timing of these stories coming out. I don’t know for certain why they are surfacing now, but I do know this: I did not assault these women.”

Sex and the City stars Cynthia Nixon, Sarah Jessica Parker and Kristin Davis previously broke their silence on the sexual assault allegations against their co-star.

Nixon, Parker and Davis posted to their Instagram Stories with a joint statement.

It read: “We are deeply saddened to hear the allegations against Chris Noth. We support the women who have come forward and shared their painful experiences. We know it must be a very difficult thing to do and we comment them for it.”

And Just Like That drops every Thursday on BINGE and Foxtel.