Can You Actually Win Friends With Salad? A Simpsons-Flavoured Investigation

PEDESTRIAN.TV has partnered with Disney+ to celebrate 30 (!!!) seasons of 'The Simpsons'.

In a classic The Simpsons episode, Lisa the Vegetarian (season 7, episode 5 ), Homer invites a number of his friends over for a huge BBBQ (the extra B is for BYOBB), much to the disgust of Lisa who has just decided that meat is murder. After asking her father if they can have some kind of party where meat isn’t served, Homer says, “I’m trying to impress people here, Lisa. You don’t win friends with salad,” which then turns into a song, complete with conga line action.

The recipe cards will be hosted on Disney.com.au, so make sure you go and check them out.

And now, let us explore this friends and salad conundrum.

First, we must understand salad. What is this leafy delight loved by some, loathed by others and simply “meh” to the rest? The Merriam-Webster dictionary defines salad as:

Any of various usually cold dishes: such as
a: raw greens (such as lettuce) often combined with other vegetables and toppings and served especially with dressing
b: small pieces of food (such as pasta, meat, fruit, or vegetables) usually mixed with a dressing (such as mayonnaise) or set in gelatin

That’s a fairly broad definition, but when you think about the breadth of options available when making a salad, it certainly makes sense. While meat salads are absolutely a thing, I think it’s fair to assume that most people would associate the word “salad” with green vegetables in a bowl.

Now that we have some guidelines as to what constitutes a salad, we can move on to the vital question — can it be used to win friends?

My first test involved simply asking some of the group chats I’m in if they’d like to go out for a salad. Yes, these people are definitely already my friends, so it’s not a true test of “winning” new friends over with a leafy meal, but I had to get a sense of what I was getting into here. A kind of control to which I could measure other results. I also needed an idea of how utterly deranged the offer might sound to a complete stranger if I were to venture down that path.

First up, I messaged my most trusted group of pals: my band’s Facebook group chat. This is a group that regularly challenges each other with creative ideas and provides constant feedback. A mini democracy with the same musical goals in mind. I knew this would be a good starting point.

Not an ideal result. My name was changed to “Saladfingers” within five minutes followed by much silence. The first actual response wasn’t much better.

Turns out my offer of salad with the band couldn’t even win them over and they’re a collection of some of my best friends in the whole world. Moving on, I extended the offer to a larger chat with an assorted collection of pals, some from high school, some from around the area I grew up. 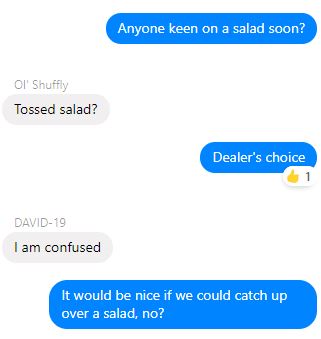 More confusion. This wasn’t going well at all. The final group I invited for a salad was a bunch of good friends I often game with. 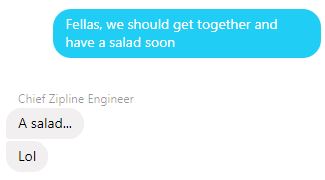 After receiving initial reactions from each group, I explained the investigation I was doing and asked if the offer of steak would have gone down better. The majority of responses to this were pretty much “yes”. 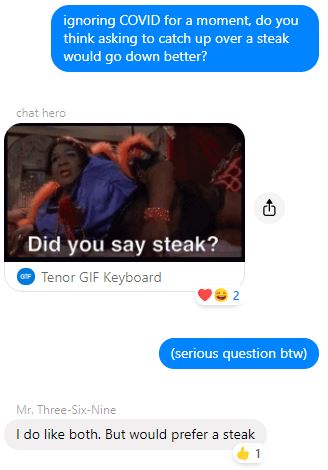 So far, The Simpsons was right again, but as I mentioned earlier, these people are already my friends. I had to find out if I could win over someone who wasn’t a friend and given the responses I got above, I wasn’t at all comfortable with asking a stranger out for a salad. The last thing I want is to be labelled a random salad pest, so that was out of the question.

In the hopes of getting some indication of how salad fares in the overall meal department, I took to Twitter and started a poll with salad as one of four different options.

Serious question: if I were to invite you for any of the following meals, which would be the most likely to positively influence your opinion of me?

Even with an underwhelming number of votes, salad was the clear loser of the bunch. In a last-ditch attempt at finding some kind of success story, I threw the question out to Facebook.

Hmm, not quite what I was after, but there was one nugget of gold in there that really made me smile.

Bingo. A first-hand account of winning a friend with salad. While rare, it seems like it certainly can happen.

What I’ve learned over this incredibly strange journey is that context matters. You can’t just offer someone an arbitrary meal out of the blue and expect it to blossom into a friendship, whether it’s a salad, steak or whatever else. Winning a friend with a meal requires a healthy base of trust. A series of events that could arrive at a situation where salad, or indeed, any meal could foster an ongoing platonic relationship.

This is also true of Homer’s BBBQ. Some of the attendees would not yet consider Homer a friend but are acquainted with him in a way that makes their attendance natural. In this situation, Homer is in a position to win their friendship with a meal, in this case, a selection of barbequed meats over Lisa’s suggestion of anything non-meat.

It’s fair to say that Homer may not understand the breadth of variety of the salad world, leading him to simply forego the idea altogether, but he may very well have won over a friend or two with a delicious and well-prepared salad had he given the idea a chance. Unfortunately for Lisa, we’ll never know.

So, what’s the conclusion?

In a closing argument, if I may, I’d like to point out that salad is often an accompaniment to a good meal rather than being the meal itself. A refreshing sojourn from a serving of meat that I’d argue as a necessity. Frankly, it’s downright bizarre that Homer had a BBQ devoid of any salad, just as it would have been bizarre if it was only salad. Both parties should have made a compromise and catered to all tastes and diets, but I suppose that wouldn’t have been very entertaining to watch.

In closing, I’d say it’s possible to win friends with salad in the right circumstances, but unlikely.

Thank you for coming to my TED Talk. If you would like to revisit 30 wonderful seasons of The Simpsons (who doesn’t?) you can do it right now on Disney+.