How Many Tim Burton Trademarks Can We Expect To See In ‘Dumbo’?

PEDESTRIAN.TV has teamed up with Disney's 'Dumbo', in cinemas now.

I don’t care how much of a film buff you are, anyone who shows even the slightest interest in movies would be able to pick a Tim Burton flick out of a line-up.

I also wager that you could name one of Burton’s director’s trademarks – black-and-white stripes, his fondness for hiring the same actors for different movies (give me as many Helen Bonham Carter X Burton collabs as possible pls), gothic visuals, stories about outcasts – there are stacks of ’em.

So, my movie-frothing friends, how is it possible that Burton’s latest directorial effort, Disney’s Dumbo, comes across as uncharacteristically warm in comparison to Burton’s usual style, yet still remains so Burton-esque? HOW DOES HE DO IT?

We know that Burton has an affinity for making his worlds gothic™ (obviously he hasn’t trademarked the term gothic but he may as well have), and the eccentric director still manages to inject his gothic ~vibes~ into Dumbo, although it is a touch more on the warm and fuzzy side. 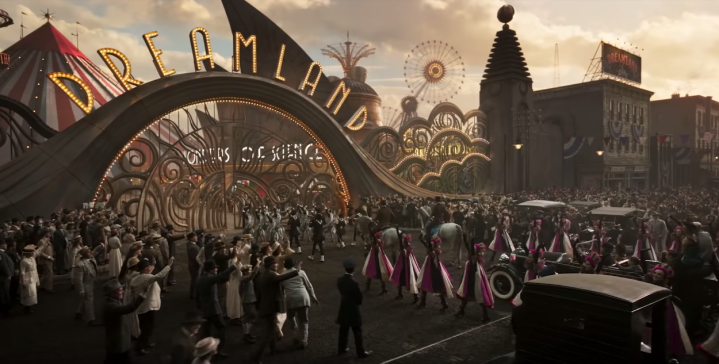 Next up: the cast. Now look, I’d never say that ol’ mate Burton plays favourites, but he definitely has his favourites.

Don’t get me wrong though, this isn’t a bad thing in the slightest – Burton knows what actors understand him and which ones can deliver consistent 11/10 performances in any movie he’s directing. It’s smart to direct people you’re familiar with, says the bloke who doesn’t know a thing about directing.

And Dumbo is no exception as there’s a slew of familiar faces that you would’ve undoubtedly seen pop up in previous Burton flicks – Eva Green, Danny DeVito, Michael Keaton, CGI animals (well I’m not wrong).

Although Dumbo is almost entirely CGI, this is a Burton film after all, so whatever you’re watching on the big screen, know that all of the attention to detail and the epic locations will have been filmed on actual sets, as Burton himself has shown to prefer over the ol’ green screen (nothing wrong with either though, whatever floats ya boat really). 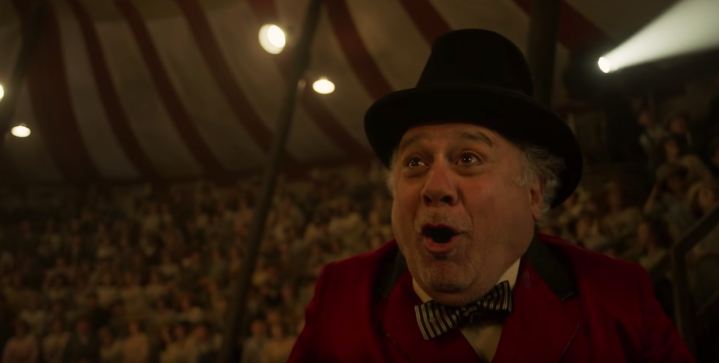 Another glaringly obvious Burton stamp is the topic of Dumbo itself – the story of an outcast little elephant. Burton loves an oddball and a bucketload of his movies usually revolve around, or heavily feature, individuals (animal or human) who are struggling to find their place in the world. Think Alice in Wonderland, Beetlejuice, Edward Scissorhands – all of them tell the tale of someone who’s just that little bit left of centre (or extremely left of centre in the case of Beetlejuice).

What Dumbo doesn’t have in common with most of Burton’s other movies though is that the main character, Dumbo (who woulda thunk it?) is an outcast, sure, but he’s just so darn adorable. Now look I loved Edward Scissorhands, I think he has a heart of gold, but dude is creepy looking. Dumbo though? Give me five.

Now it is curious that there seems to be an absence of black-and-white stripes but I’m deducing that down to the fact that the entire circus tent has red-and-white stripes and because this is a notably less dark Burton film, the red is simply a substitute for the goth black. Is that a bit of a stretch? None of yo’ business.

Anywho, feast your eyes on Burton’s latest creation below:

Love it. Disney’s Dumbo is in cinemas now – get around it.

We Dissected The 2-Min Trailer For Stranger Things 4 Vol. 2 & Here’s 8 Theories We Came Up With