Historians have no idea when or why Australia first became obsessed with making very big versions of things, but it’s a tradition that we maintain with an appropriate level of seriousness (that is: ‘complete’). If a thing exists, someone in a town just off one of the major highways will have made a very big version of it out of fibreglass.

By what metric would you measure the greatness of these things? An amateur would tell you that you could rank them simply by size, but that doesn’t capture the essence of the Big Thing. What really matters is how big a Big Thing is in relation to the object from which it draws its likeness. The Big Orange isn’t called the Big Orange just because it’s big and an orange — it’s called the big orange because it’s big for an orange.

Doubtless, keen-eyed Queenslanders will note some ommissions from this list, and we welcome you to fuck off add some suggestions of your own in the comments. 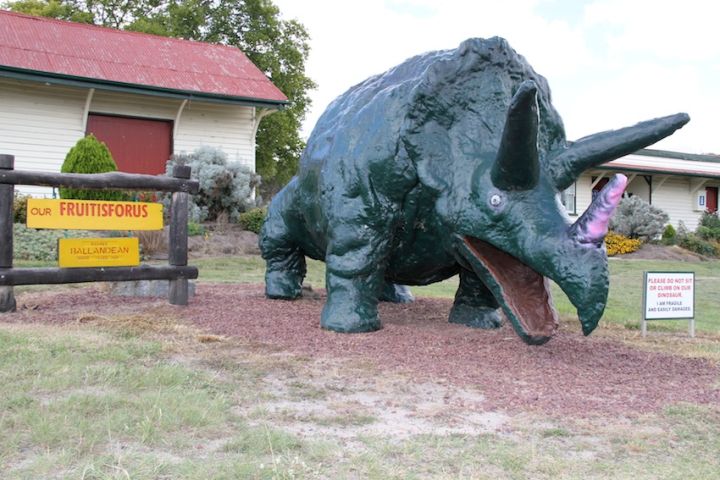 Thanks to a combination of its crazy-eyed stare and its proximity to my mum’s place, this one is perhaps my personal favourite of Queensland’s Big Things. It is, however, completely useless when it comes to being a Big Thing. By my calculations, this fruit-spruiking triceratops is the only thing on this list smaller than the thing it is purported to be, coming in at about four-fifths the size of a triceratops. Don’t be too hard on it though, the poor thing barely survived a car accident a few years ago. 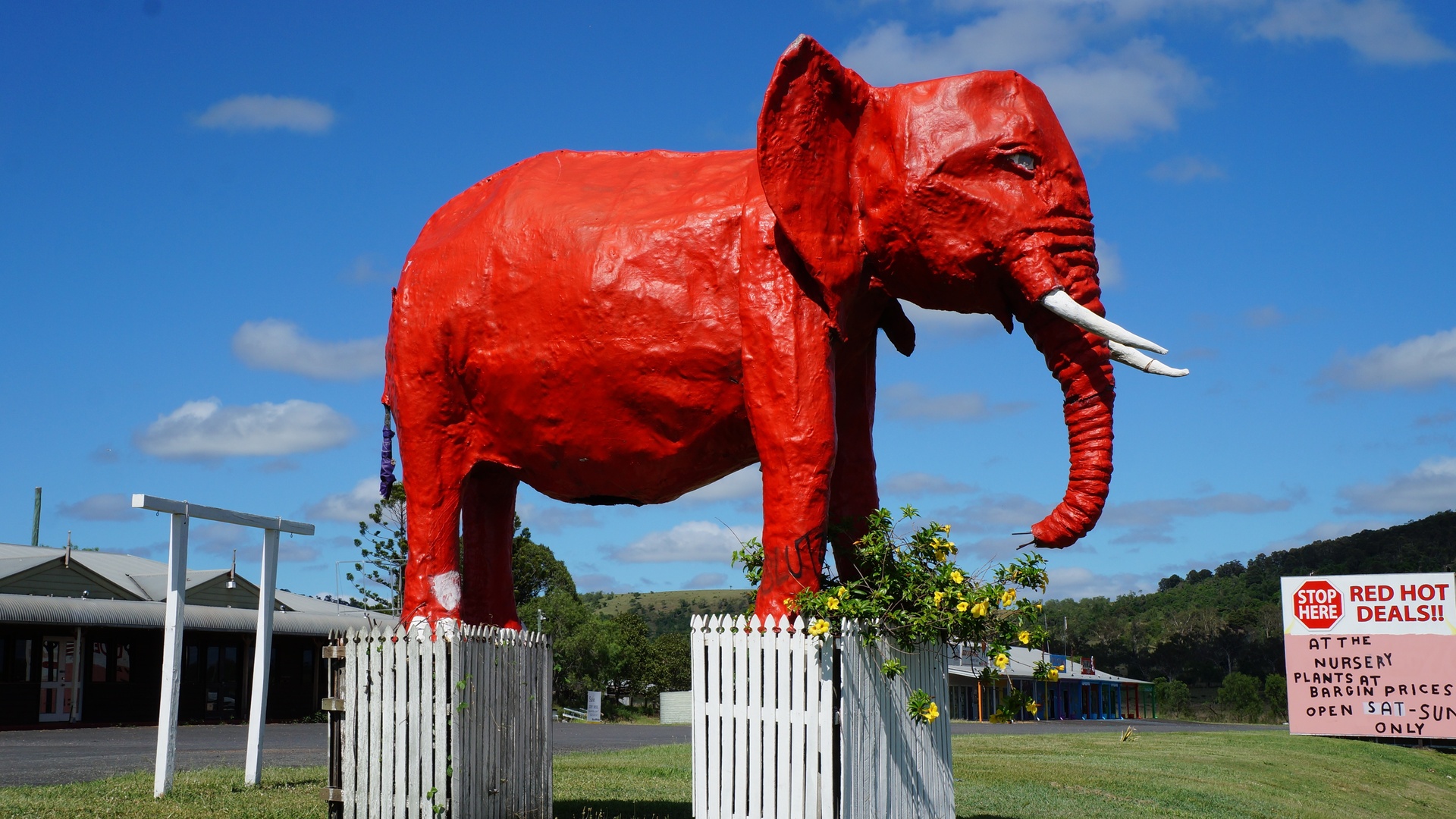 This is better than Fruitisforus (the triceratops), but not by much. The Big Red Elephant on the Warrego Highway is just about exactly the size of an elephant, which suggests that, perhaps,  instead of being a Big Red Elephant, it is just a Red Elephant.

It never really struck me as odd that there’s a giant statue of Ned Kelly on the way out to Maryborough, I was always way too distracted by the big sign next to his head that says ‘FREE FUEL’ which, despite having driven past it hundreds of times, I have never been curious enough to investigate. The statue is big, sure, but it’s only about four times bigger than the man himself.

The problem with marlin is that they’re already quite big. Sure, it’s a big enough statue, but so is the fish. I don’t want to throw the word ‘cheating’ around willy-nilly, but nearly the entirety of the height of the Big Mower comes from the handle, and the mower itself is angled at 45 degrees of inclination so as to maximise its height. In saying that, I will begrudgingly concede that, at 11 metres in height, the Big Mower is still quite big for a mower.

If it’s news to you that there’s a 14-metre-tall statue of Captain Cook in Cairns, then you’ll be even more delighted to know that it almost 100% looks he’s doing a Nazi salute. Your feelings about the man aside, you simply cannot deny that this hideous statue is very big.

Rocky’s Big Dugong might be the second biggest Thing on this list but dugongs themselves are also undeniably quite big, which will definitely not help with your official Big Thing Ratio (8.148, by my maths).

Given the fact that barramundi can grow to be unbelievably huge, this ranking is generously based on the average fish, and not one of the monsters that are as big as a man.

Same as previous but my research indicates that this one is 50cm longer than the one in Normanton. Normanton must be bloody fuming.

The Big Easel, constructed by Canadian artist Cameron Cross in 1999, is not small. It is, in fact, very, very big. Standing at a whopping 25 metres tall, this is the tallest on the list by height (the Big Barrel is 25 metres length-wise). To do this calculation, you must ask the age old question: ‘How long is an easel?’ I decided to go with what I believe to be the standard-sized one, which is about the height of a person.

The Big Crab is not particularly big, but then again, neither are crabs. If you consider 30cm to be a reasonably average width for a mud crab, then the Big Crab measures up to about thirteen of those abreast.

To be honest, the inclusion of the barrel in this list feels a bit tenuous, given its corporate nature and double life as a building, but we must admit, it is a Thing and it is Big. (Note: barrels come in all sorts of sizes, but we opted to measure this based off the sort of normal-sized barrel you’d expect to see on a pirate ship.)

What do you picture when you hear the name ‘Buffy‘? Silly question really, we all know the answer: a giant statue of a cane toad in north Queensland. Named after the scientific name for the cane toad (bufo marinus), this 4.5-metre-long statue is significantly bigger than the actual thing.

Ah Nambour, what a place. The birthplace of Kevin Rudd. The weird bit of the Sunshine Coast that people on the Sunny Coast talk about in the same way as Brisbane people talk about the Sunny Coast as a whole. Whether you think it’s a hole or an up-and-coming spot with some great things going on, you absolutely cannot deny: pineapple. They’ve most certainly got a big one. Your average pineapple is about 40-50cm, including the leaves. At a hefty 16 metres, the Big Pineapple leaves this for dead.

not a small orange pic.twitter.com/WSiYqb6nJv

Who could forget Gayndah‘s iconic Big Orange and its accompanying mascot, the spritely figure of Gay Dan? Certainly not us. At 4 metres in diameter, our calculations put the Big Orange’s Big Thing Ratio just ahead of that of the Big Pineapple. Only just, though.

Here’s a fun fact about Thulimbah: thanks to the way the state border has been drawn, there’s a spot you can stand where there is a patch of NSW directly north of you, while you remain in Queensland. Wild.

This one is a classic scenario which we are fall familiar with by now: the apple isn’t massive, but neither are apples, placing this relatively solidly in the field.

I’m not going to turn this into some sort of unpaid advertorial for Yatala Pies. I’d be preaching to the choir, we all know what the deal is. The pies are good. The Big Pie probably doesn’t taste all that fantastic, but it is definitely way bigger than a regular pie.

Day 40 – It's not THE big banana…but it's A big banana…Mackay style. From my FIFO today. pic.twitter.com/D7oMCLv0

Under no circumstances is this Big Banana to be confused with the Big Banana in Coffs Harbour. That’s the sort of mistake that an amateur Big Things enthusiast would make. The one in Mackay is clearly different, being somewhat smaller and oriented uprighted. At just over nine metres tall, this is way, way bigger than any banana I personally have ever seen.

My gut feeling is that if your mandarin can double as the office for a caravan park, it’s a pretty bloody big mandarin!

The recently unveiled Big Thermometer in Stanthorpe is, as far as we’re aware, Australia’s newest Big Thing, and it is quite big. Unfortunately, this 10-metre-tall thermometer is not the kind you might be picturing, with glass and mercury and what not, but it does still say what the temperature is. We have decided the ratio for this one based on the sort of small thermometer a doctor in the 50s would check your temperature with. 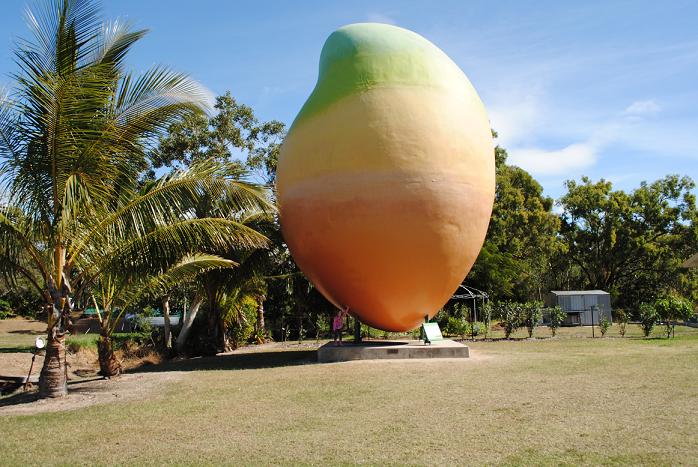 I’m not sure if this is some sort of fanciful false memory that I concocted as a child, but my only recollection of Bowen from being a kid is seeing tumbleweed in town, which doesn’t make a whole lot of sense, given that it is right on the coast. That’s neither here nor there, though, whats important is that a 10-metre-tall mango is a very, very big mango indeed. Boy howdy.

Those of you who regularly make the drive between the Sunny Coast and Brisbane will likely recollect this unassuming entry on the list. “It’s not that big!” I hear you say. True, but how big is a strawberry? That’s how they get you.

Knowing that the average meat ant is about 7mm in diameter, it would be hard for even a reasonably modest statue of one not to absolutely shred the charts on this one. The Big Meat Ant comes in at about 700 times bigger than its real-life counterpart, which is why it’s so safely nestled here at number 3.

This one is going to be controversial, and not without reason. Does a big letter really constitute a Big Thing? How big is a letter? Both very valid questions. It is our belief that, not being just a word or slogan, this constitutes a Big Thing and not a sign, and that the size of a letter ‘g’ such as you would find in a small paperback novel is apt in gauging its size. Haters may say it’s fake, but we believe Gracemere‘s Big G gets the silver.

The Big Macadamia Nut hit a winning formula: a tiny, tiny real life thing that also happens to be an incredibly simple shape to reconstruct. Good job all round.

Robert Irwin’s Starred In His First Ever Fashion Shoot And Is He… A Long-Lost Hemsworth Brother?