The ATO Asked Its 20,000 Workers To All Narc On Each Other For Being Lazy

There’s a certain type of person who dobs in a co-worker for bludging: it takes a certain combination of overbearing seriousness, brown-nosing and a sense of moral impunity, dashed with a need to please. The formula is inarguably the opposite of what Professor Utonium used to make the Powerpuff Girls: whereas that trio are true heroes, this co-worker is but a banal villain.

Using my limited understanding of finance, it is clear that auditing is, in essence, the quintessential narc force-of-hand. In short, it is in no way surprising the Australian Tax Office asked its 20,000 employees to spy on bludging workers and do the dirty dob.

In a memo sent out last December, the ATO tried to address potential issues around its flexible working hours, asking co-workers to report “suspicious” behaviour. Here’s how it starts:

Seen something suspicious? You might have seen it before. A colleague makes a habit of taking long lunches, or regularly leaves early, or spends the first hour at work eating breakfast and reading the paper … or all of the above.

And yet they are still able to take regular flex days. There could be explanations — perhaps they travel to work with their partner who has to start early, and they don’t ‘sign on’ until after breakfast. Or maybe they have an agreed working arrangement that enables them to leave early, or partly work from home.

Or perhaps your suspicions are correct and they’re simply not recording their working hours appropriately.

There’s something really stunning about the podcast-script nature of this memo, as if equating dobbing your desk buddy in for taking their time with their breakky is the moral equivalent of successfully re-opening Adnan Syed’s case for a new trial.

The memo continues, asking the ATO workers to weigh up their call of duty. As you read this, imagine a discordant violin track underneath that plucks at the very tensions of human morality:

“What do you do? Speak up, or mind your own business? Put up with the fact that it impacts your work, or raise it with your manager? And what if it is your manager?

“Maybe they just lose track of time, or are careless rather than acting deliberately. Maybe there are indeed reasonable explanations. Wouldn’t you be getting them into trouble unnecessarily?

The memo, which you can see in full below, asks workers to make anon reports in order to help crack down on these abuses of improperly logged working hours.

Flexible workplaces have been implemented by government agencies to improve productivity: this seemingly does the opposite, and only serves to create a super weird vibe in the office. It also feels a little pointless too, since other workers don’t know what kind of flexible hours others are on, since it’s rare that they’d be on the same exact schedule – that’s kind of the whole point.

As the tax branch secretary of the Australian Services Union Jeff Lapidos, told the ABC, “It is completely unproductive.“

Here’s the memo, for ref: 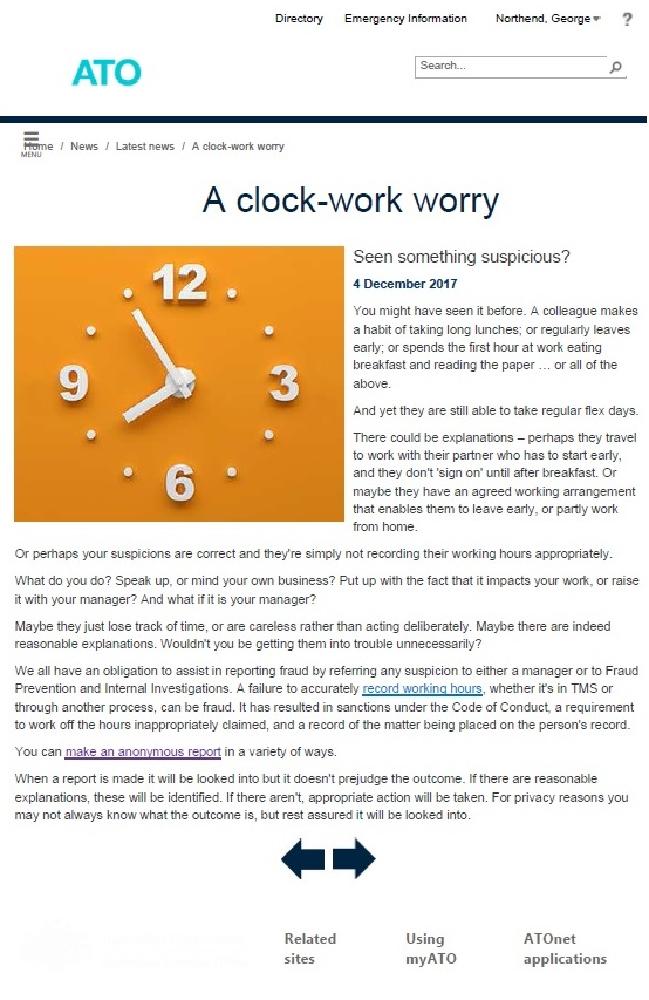 Anyway, to surmise, don’t narc on people for reading the paper?