Because we love a feel-good yarn, we’ve partnered with TAFE NSW to highlight all the goals that people are scoring across Aus. Feeling inspired? You really can be whatever you want to be at TAFE NSW.

Like most of us, Sebastian Barkoczy didn’t always know what he was going to do for a career. Next minute, he’s rubbing shoulders with some of the biggest names in Hollywood, including Ridley Scott, Michael Fassbender and Scott Eastwood – and has found his dream job. How did that happen?

“I was working in bars – nothing really productive, no real career path,” he says. “I had a million ideas but no way to materialise them.”

Sebastian loved to create with his hands and working with people, so he looked at his options and enrolled in an advanced diploma of design for live production, theatre and events at TAFE NSW. He credits the course with giving him the skills to bring his ideas to life.

In the past few years, he’s worked on Pacific Rim: Uprising, Alien: Covenant and the upcoming Aussie film Ladies In Black, starring Ryan Corr and Noni Hazlehurst. Regardless of the highs of working with Playschool legends, Sebastian finds the hard yakka more satisfying than the star-spotting.

“My favourite thing about working on a film set is the scale of builds,” he says. “It’s really exciting and there’s a lot of talented people working together to achieve huge outcomes in very tight deadlines. It’s a huge adrenaline rush.”

No kidding. Look at this monstrous fake log in Alien: Covenant, which, may we remind you, is just one small part of a massive set:

As a set designer, Sebastian also works on events, spaces and even art installations. A few years back, his and his mate’s work, ‘Robotanic‘, was a cornerstone piece of Vivid Sydney. Robotanic was an interactive ‘forest’ featuring ten wooden sculptures which lit up and emitted noise by touch and sensors. 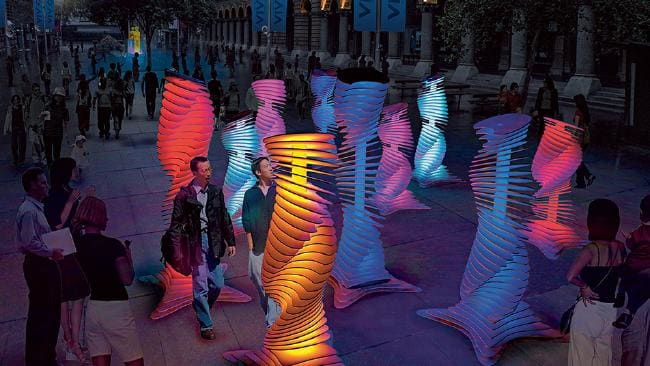 Design, for Sebastian, is about transporting people to new places and worlds. But how did he himself get to that place?

“When I got to TAFE NSW, it really unlocked my passion and what I was doing there is exactly what I’m doing now,” says Sebastian. “It just completely translates.”

Set designing was a natural fit for Sebastian. And TAFE NSW gave him the confidence to back it up. Sebastian won multiple awards, including vocational student of the year. We guess Ridley Scott was pretty impressed. We are too. Onya, Sebastian.