Fuck celebrity dating tea, I wanna know what celebrities order when they go to restaurants.

Actually I take it back, I want to know both. But today we’re discussing what the stars eat!

Goss guru Deuxmoi got her followers who work in hospo to send in what they’ve witnessed celebrities order and I’m writing every single one down.

Why? Your guess is as good as mine. We’re just pervy freaks, aren’t we?

First up there’s my favourite of the lot: Mary-Kate and Ashley Olsen.

The gals are such a goddamn mystery so I eat up every single nugget of info we get on them, not unlike how they apparently eat up AUD$63 salads from the Polo Lounge.

But apparently they don’t eat the entire salad, just the lettuce. Interesting…

As for Aussie comedy queen Rebel Wilson, she loves spag bol from the Chateau Marmont, although I bet she doesn’t call it spag bol at the Chateau.

Or maybe she does, it is Rebel Wilson after all. A forever humble legend. 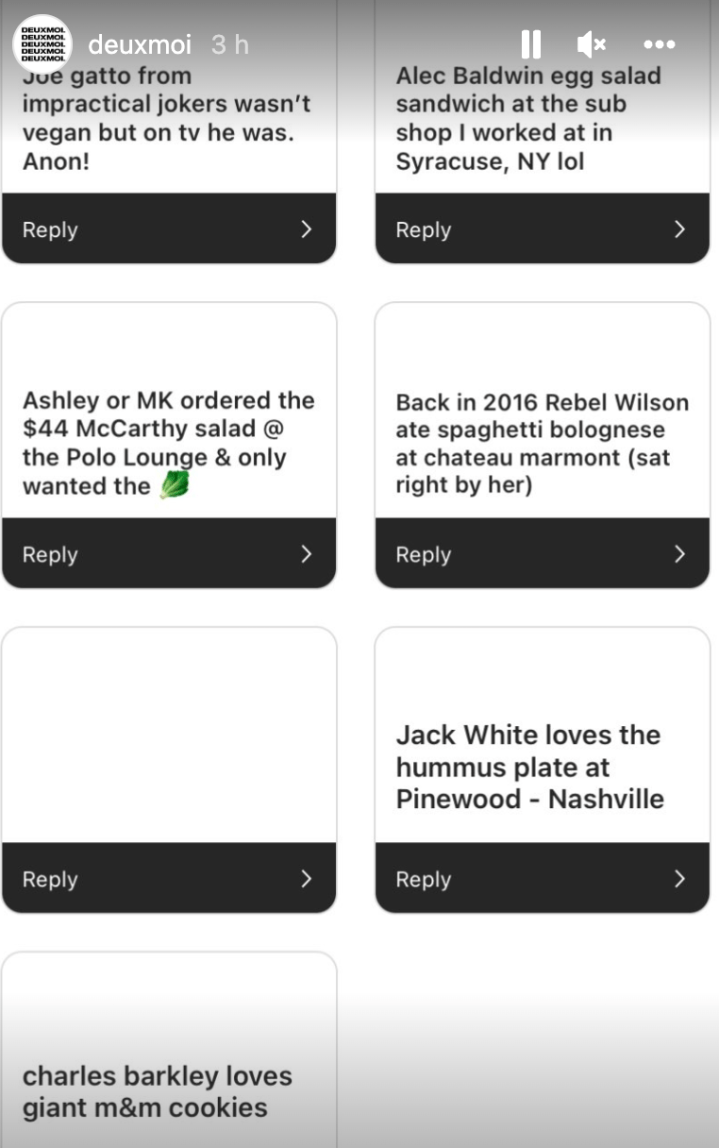 And unsurprisingly, Harry Styles — who has a song called “Music for a Sushi Restaurant” — loves sushi, as well as the Filet-O-Fish from McDonald’s. 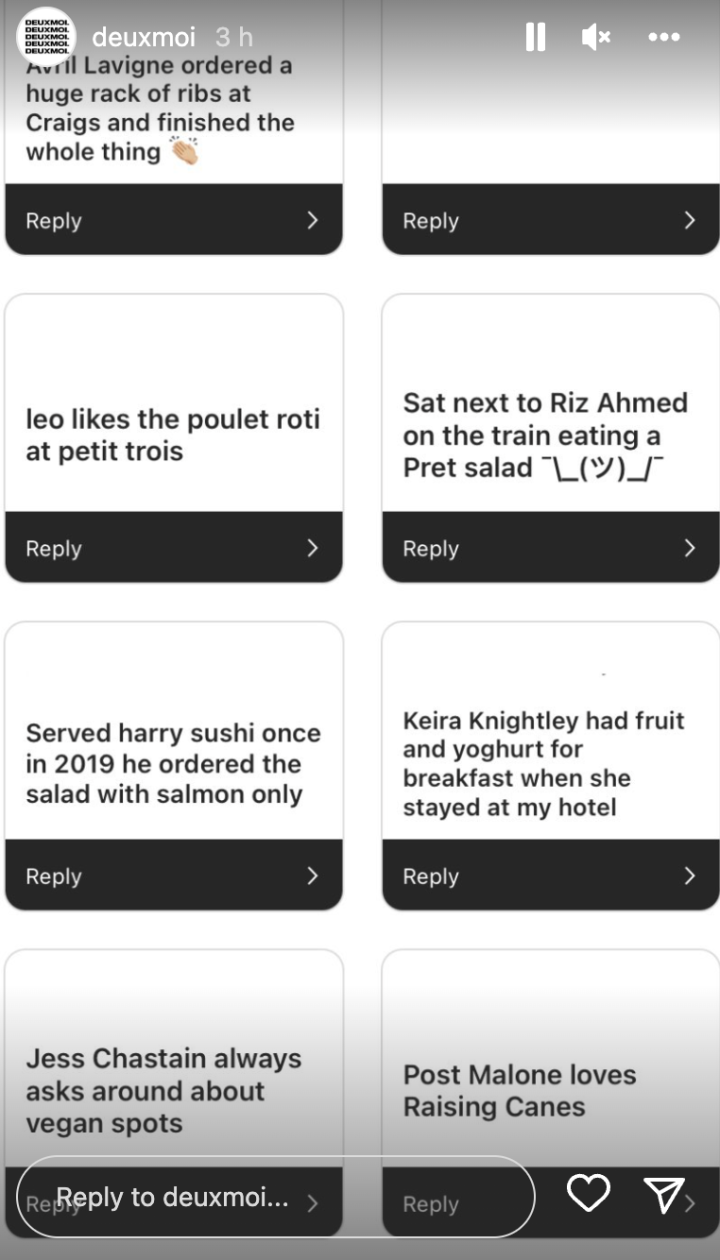 Beyoncé goes from enjoying huge salads to burgers and fries because life is all about balance.

And Stephen Fry froths oysters. How very bougie of him! 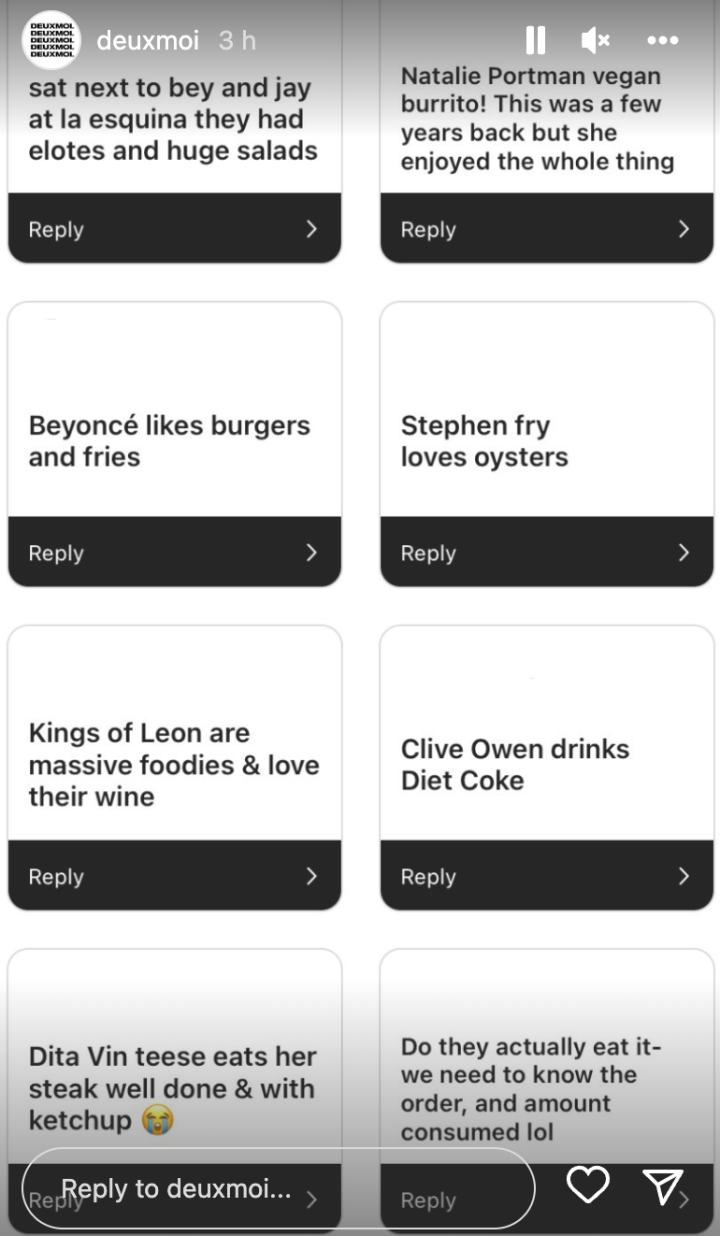 Angelina Jolie loves a hearty brekky, opting for two eggs, two sausages and toast from room service every time she stays at a hotel.

Shawn Mendes is a mad coffee fiend and again, SAME. 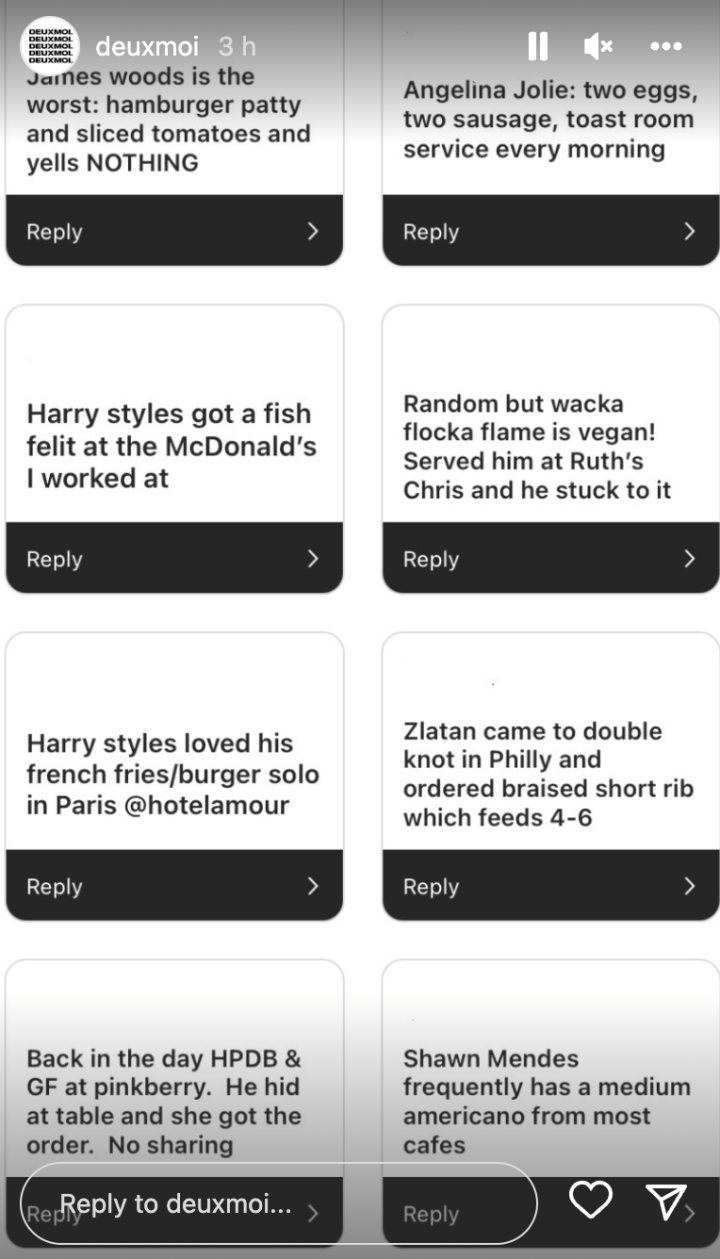 Harry’s fellow One Direction cutie Niall Horan is v. “on-brand”, says another commenter, who claimed he ordered a Guinness Beer from the pub they work at. 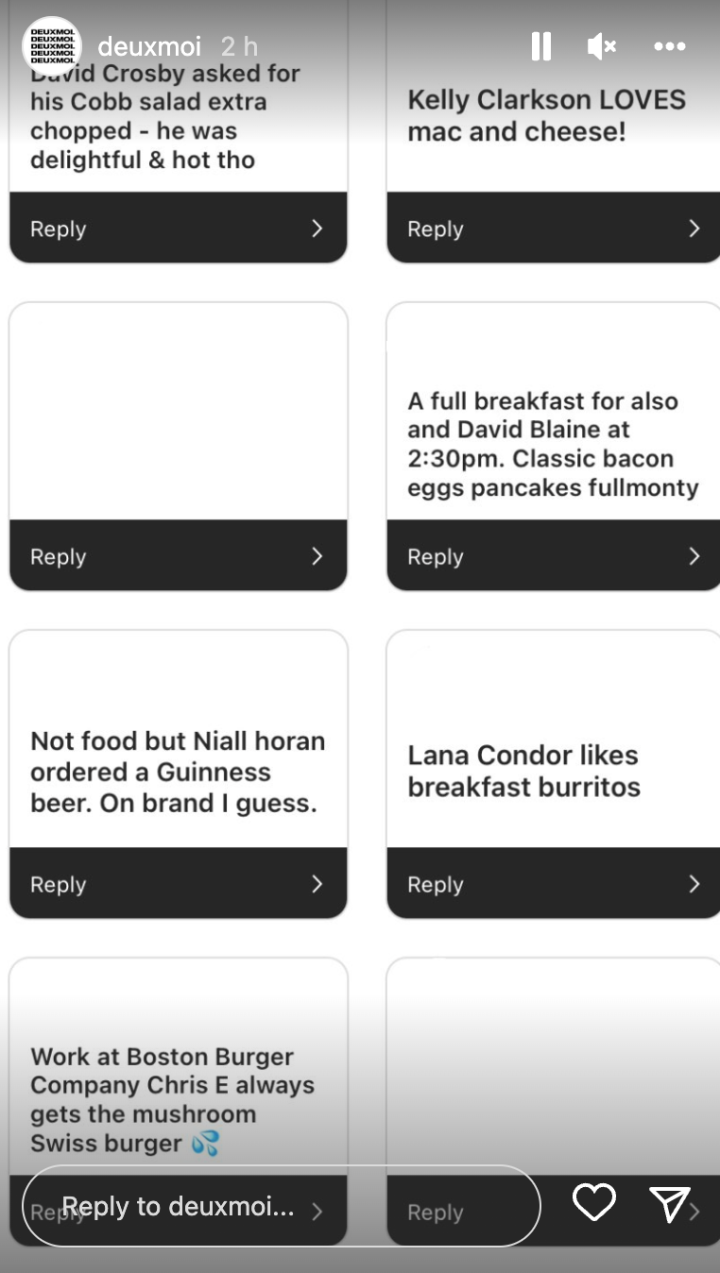 The eldest Jonas Brother Kevin gets special privileges at The Cheesecake Factory and orders a Thai glazed salmon that’s not even on the menu. 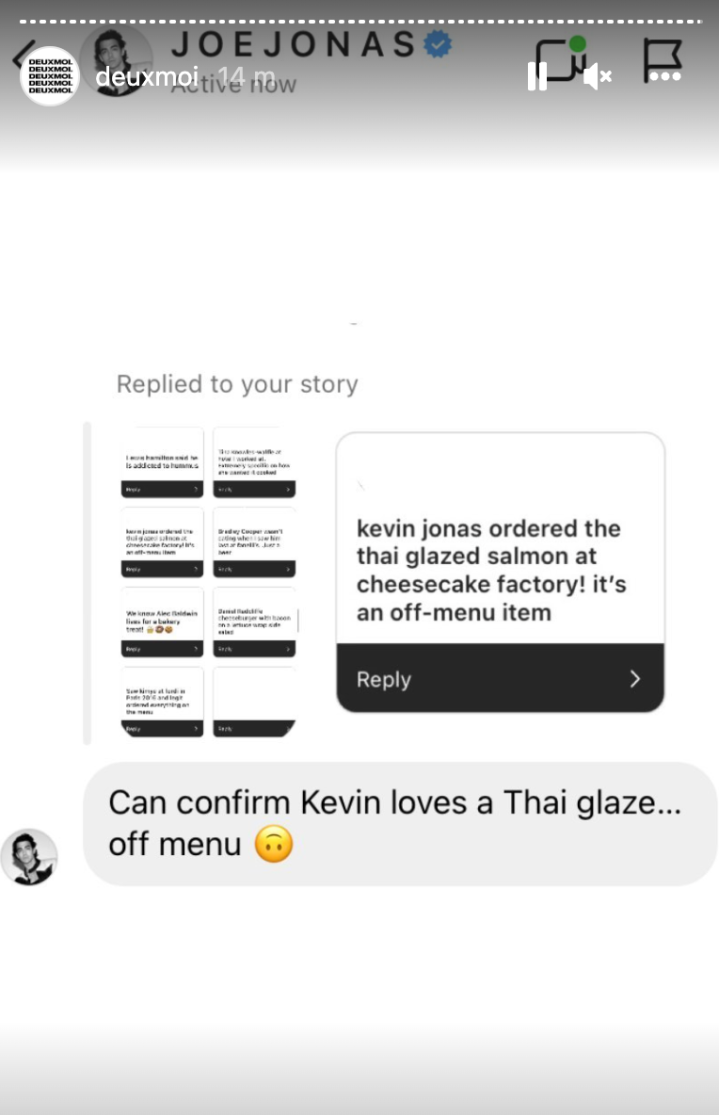 IRL Harry Potter Daniel Radcliffe opts for a cheeseburger with bacon on a lettuce wrap with a side salad to refuel after Quidditch.

And when Kim Kardashian and Kanye West were a thing, they’d order literally everything off the menu, which I’ve heard several times before.

Apparently one time Kanye ordered the lot at a lush restaurant and stiffed Pete Davidson with the bill. A bit of foreshadowing there! 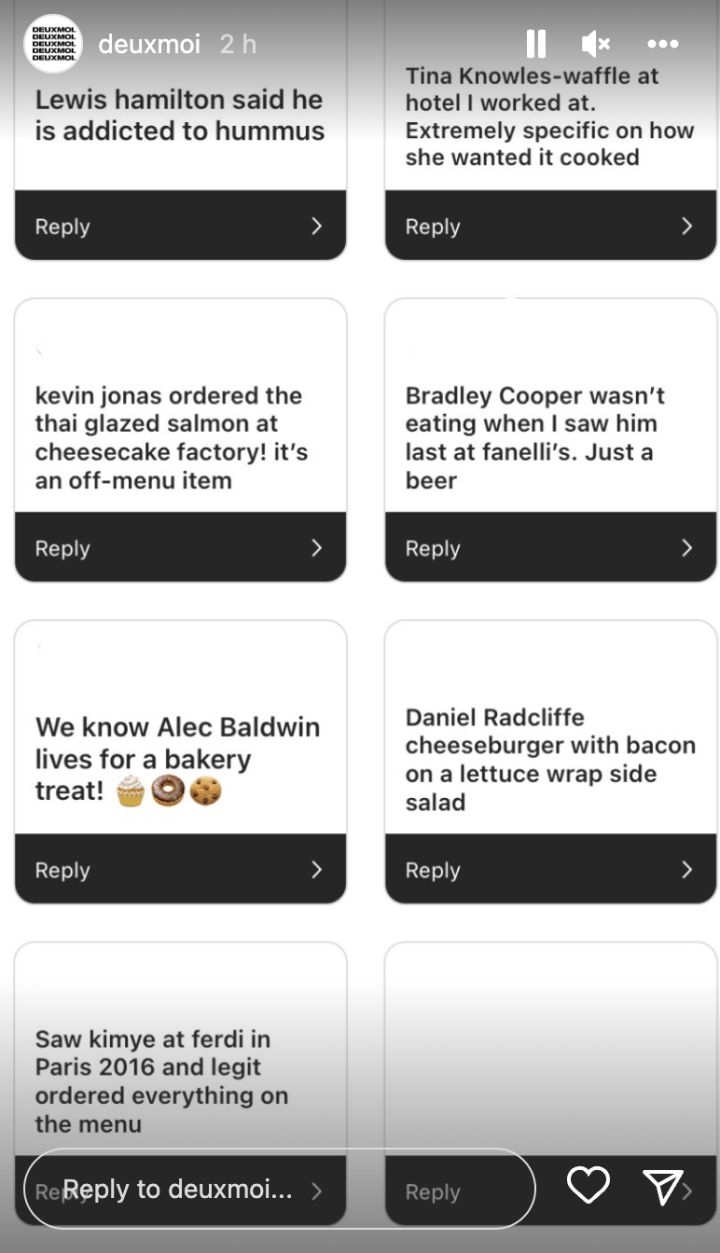 As for your girl Taylor Swift, she enjoys a grilled parmesan caesar salad from Wendy’s and ma’am, this literally is a Wendy’s. 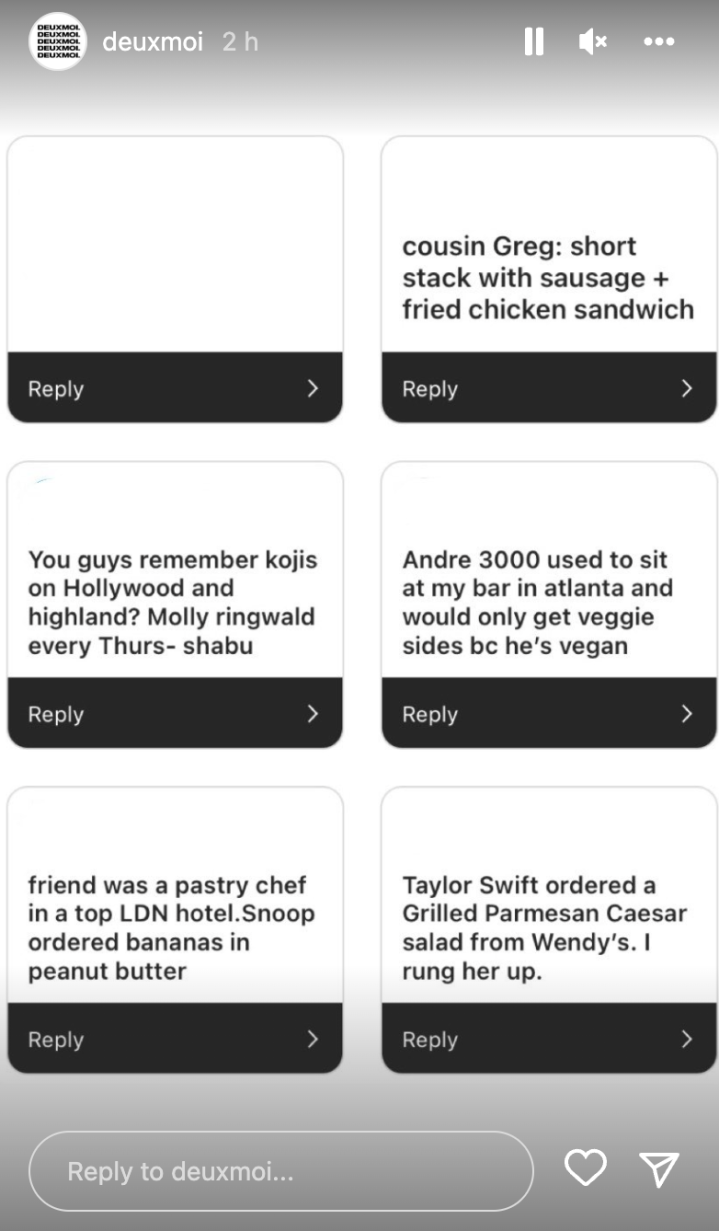 And finally, Beyoncé really wasn’t kidding when she said she had hot sauce in her bag, swag.

According to one commenter, she loves hot sauce on her oysters which is certainly… a choice. 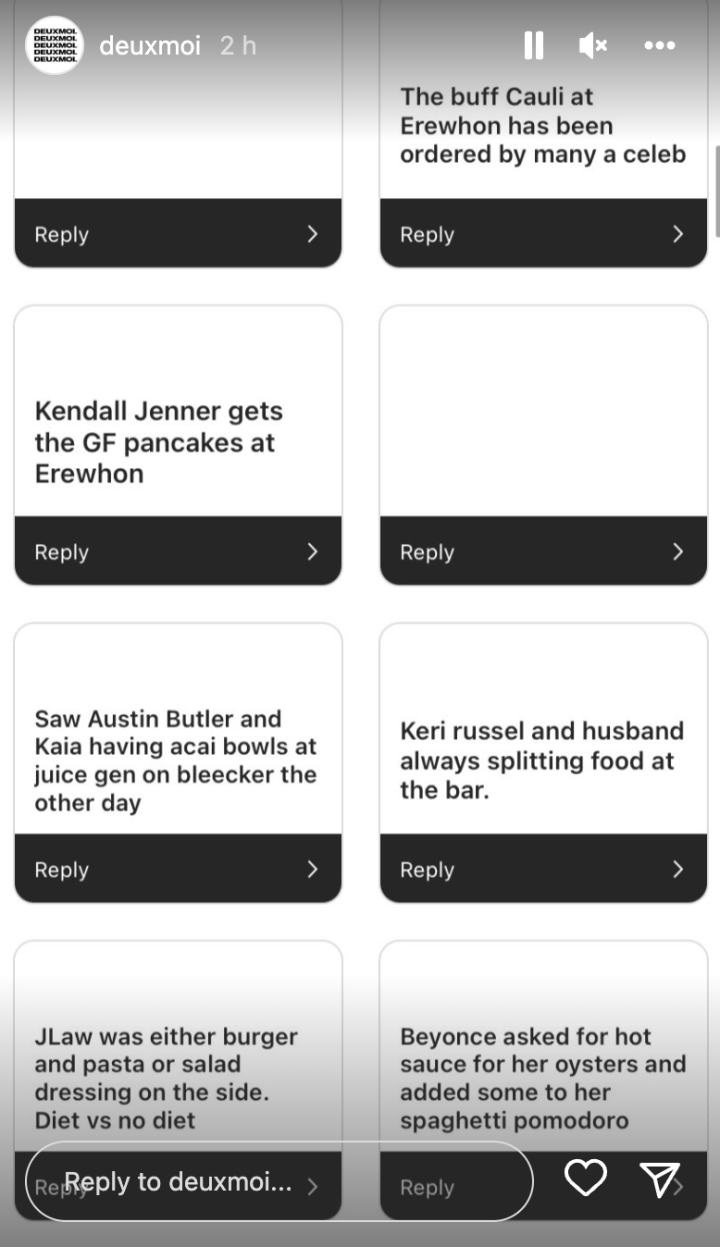 Rich people shit, man. What can I tell ya?