I have many titles here. I mean officially I’m supposed to be the Senior Style & Features Editor, but that’s just a facade, really. In reality, I’m the Evil Dolls Editor, Murder Editor… and Shapes Editor.

READ MORE
Chicken Crimpy Is The Only Shapes Flavour That Matters, The End

Yes, I wrote an entire article about Chicken Crimpy Shapes, no I will not apologise, yes I actually get paid to do this shit.

So when boxes of the new Vegemite & Cheese Shapes hit the PEDESTRIAN.TV offices, naturally everyone said “Melissa, you Lord and Legend, you must review these new savoury treats”. And by everyone I mean that I yelled across the office “NO ONE WRITE ABOUT THE VEGEMITE SHAPES THEY’RE FUCKING MINE TO WRITE ABOUT”. Don’t I sound like a treasure to work with?

Anyway, I’ll shut the fuck up and get to the review, shall I? 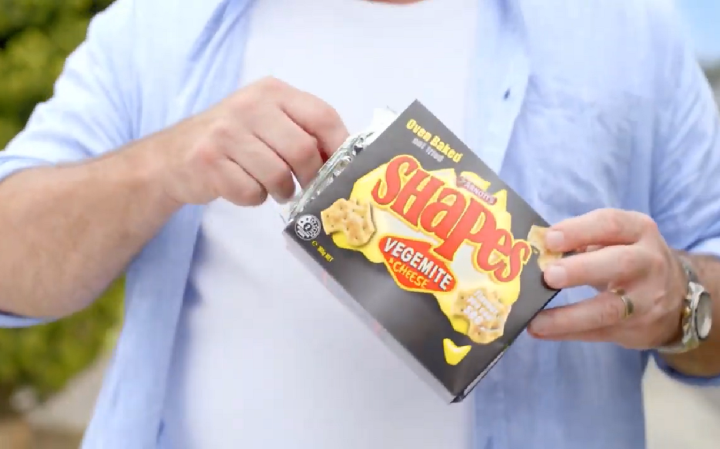 I was hesitant at first. The cracker has a concerning level of visual flavour. Now, I’m here for “flavour you can see” – after all, that’s the Shapes mantra right? But given Crimpies are my jam, seeing this on a cracker is…. well.

I think we can all agree that is an alarming level of visual flavour.

When I first put a Vegemite Shape in my gob, I was pleasantly surprised. I’d expected a flavour bomb of MSG-style death tongue, you know when your tongue goes kind of numb when you eat overly flavoured shit? But the Vegemite Shape was more nuanced. It had a light Vegemite tang to it, with a subtle milky finish. I’m aware “tang” and “milky” shouldn’t ever be seen in the same sentence, but that is part of the Vegemite Shape charm – it surprises you. It leads you down a path you never expected to walk down, and at the end there is the Triwizard Cup, and the Triwizard Cup represents the happiness you have won for your very own tastebuds.

Some people? They don’t enjoy the Vegemite Shape at first. My colleague Kate for example said “you’ll need to push through the first few”, but conceded that she now, in fact, can’t stop eating them and please god remove them from my sight. Our Tech Editor Matt ate one, said “ooh this is moreish isn’t it”, and has since eaten exactly 0 more. I know because he sits next to me and I’ve been secretly monitoring him.

After consuming half the box of Vegemite Shapes, I felt a little queasy. This is likely because I had just eaten 100g of starchy carb. But enjoyment-wise, I was really having a bloody bang-up good time.

Firstly, as I said before, the flavour isn’t too intense so you really can keep shoving handfuls into your gob like a madman. But it’s more than that – like the Chicken Crimpy, the flavour is addictive as FUCK. I found myself absent-mindedly chomping away, not even realising I’d eaten about 40 Shapes in 3 minutes.

Secondly, and this is important for absolute fucking idiots like myself – the actual physical SHAPE of the Vegemite Shape is mouth-friendly. Like fuck off with the sharp-edged BBQ Shapes and even more abominable Cheddar, you know? I’m a complete moron who can’t manage a simple chewing action without stabbing a Shapes corner into my gum. I like the Australia shape of these guys. It requires no thinking to chew. I created 0 new mouth ulcers c/o gum stabbies.

Now, the big question: would I buy Vegemite Shapes at the shops, over my Lord the Chicken Crimpy? Probs not tbh. But in the Shapes hierarchy of Mel, which is as so:

I’d sit it at #3. Which is an achievement, I feel. Especially for a newcomer with such an aggressive amount of flavour you can see. However, while I can and have definitely eaten an entire box of the things, I also didn’t pay for them and part of my Rules Of Life is: if you get a free food, you eat the free food. So who knows if I’d do the same if my money was involved, you know?

My overarching take on the Vegemite Shape is this: they excite me. And yet in a very real way, they scare me.