PEDESTRIAN.TV has teamed up with Red Rooster for their new Chicken Waffle Cones.

Joke’s on all of you, I have suspiciously low standards when it comes to food, so these sweet and savoury combinations are selfishly designed for me, and me only.

Don’t discount my suggestions entirely though, I feel there’s enough rationale behind each combo to at least warrant a taste-test – it just depends on whether you’re a big ol’ snob who can’t look past the unconventional pairings.

Is that a dare? A threat? An insult? You’ll never tell. Idiots.

I shit you not, sometimes it’s worth being hungover just so you can shamelessly spread some chocolate on a greasy potato rectangle (or “hash browns” for you purists out there).

What’s not to love? Everything about this combo screams high blood pressure and a shorter life-span, which is exactly how I determine if anything’s gonna be tasty.

Admittedly, I did get this idea from an episode of Friends, where Rachel accidentally makes half a trifle and half a shepherd’s pie.

But having officially trialled the formula, I can attest to the credibility of this glorious food combo.

Woah, I’m just having one of those epiphanies where I’ve realised the single life might not be my choice.

Alright, let’s get back to basics for a hot sec.

The chicken and waffle combo has been floating around for years now. It’s a classic.

However, have you considered throwing some chicken bites in a waffle cone? Outrageous. It simply can’t be done.

Red Rooster has been hard at work making your wildest dreams come true, and the bloody buggers have done it. They’ve created a Chicken Waffle Cone.

We tried it out on some hungry bruvs and bruvettes the other night, and it went down like this:

If you wanna get your food chute around one, hit up your nearest Red Rooster before they’re a thing of the past.

This is actually not as disturbing as it seems – and I have an entire family to prove it.

Mum has always made this tuna curry that tastes a tonne better than it sounds on paper. To prove it, I’ve attached a text exchange we had many moons ago: 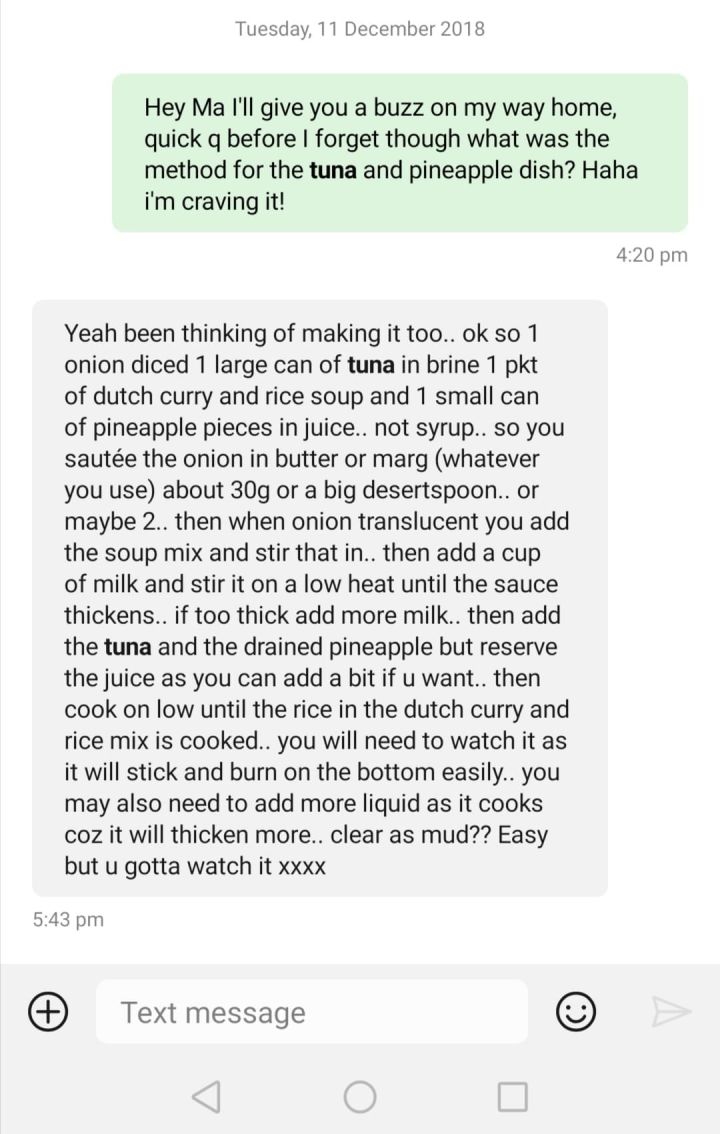 Go ahead and disagree with my sweet Ma. Go on, do it. See what happens.

I consider eggs to be what you would call a ‘neutral’ food – they can go in quite literally anything.

But, as most people would consider them savoury, I’m happy to rock your world. Gotta rock something, right?

And for the naysayers out there, no, the taste of egg does not detract from the sugary goodness. Get outta here.