There’s probably already a real German word for this but, screw it, let’s make one up anyway: blerpleshpertz. Blerpleshpertz is the feeling you get when you are introduced to something and it immediately registers in your brain as being fundamentally wrong. Not morally wrong or factually incorrect. Just… wrong. Incongruous with the way things should be in the universe. This evening, I was struck by sudden and acute blerpleshpertz after seeing this tweet:

I don’t want to upset anybody but I just found out that you can buy potato scallops at county fairs in the US but they call them “Australian battered potatoes” and they put cheese and ranch dressing on them. pic.twitter.com/EgLMxRTr2I

In Alan Moore‘s seminal graphic novel Watchmen, the villain* brings about world peace by introducing a horror far greater than the world was ready for. Accordingly, who gives a toss whether it’s a potato cake or a potato scallop when ‘Australian battered potatoes’ is being used, on a daily basis for all we know.

Sure enough, Twitter user Rachael Lonergan is correct: this is definitely a thing that exists. From their website:

Australian born, Carmel Dyer introduced this tasty, hearty Australian sensation to the US at County Fairs more than 20 years ago. Since 1987, millions of people have enjoyed this great tasting Fair Food.

As intimated by the tweet re: toppings, the name isn’t the only thing that’s different about them:

This isn’t the first time this same organisation has come to the attention of us simple folks in the land down under. In 2015, Reddit user Heffeweizen posted a photo of their stall and asked “Is this really a thing in Australia? I was at a county fair in California and experienced this. It was actually quite delicious!“

Look, sure, it might be delicious, but it’s also a crime. I can’t articulate how or why it’s a crime, but I just know deep in my gullyworks that it is. They also posted this photo, which possesses the same sort of nightmarish slime quality that all pictures of food taken with the flash on seem to possess: 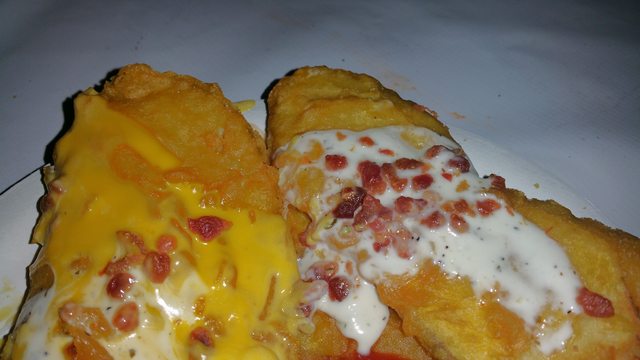