Sultanas are such a friendly food. They’re so small and non-threatening, I used to gobble on them during Little Lunch at school. Now I just nibble on them during work, I bloody love sultanas is what I’m trying to say here. I throw them in cakes, buns, bread, and pies. It’s second nature to me, I don’t even think about it.

So a little while ago I used the Kmart sausage roll maker to create bootleg Macca’s apple pies. Not to brag, but they were très delish. I shoved three down my food chute and burned my tongue, but it was worth it. Look at ’em. 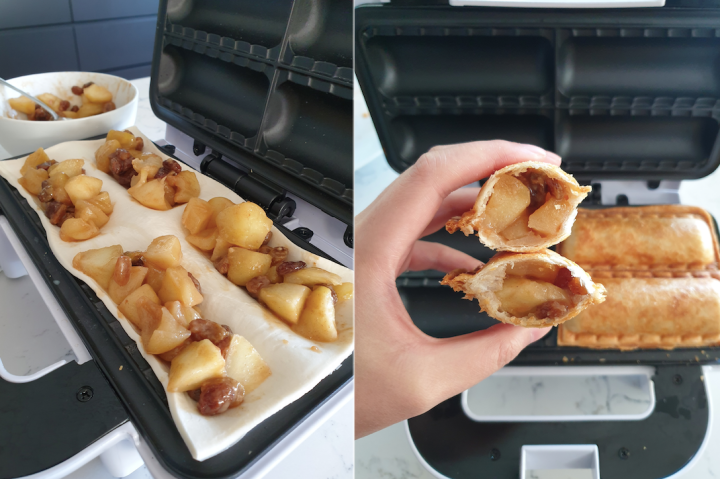 I was pretty chuffed with the apple pies, but some of you weren’t. These are just two of the anti-sultana comments I copped when I posted the yarn on Facebook.

Sure, this happened four weeks ago but I do be holding on to it. Last April, my colleague David – who I will publicly and openly shame – published a yarn titled “Hot Cross Buns Suck”. T’was an interesting take, considering David is the one that sucks here, but what really made me scoff was his opening line: “It’s a fitting time to share my core belief that sultanas, currants, raisins, and other variations of ‘dried grape’ are fundamentally bad.” WRONG, sultanas are king. And they belong in apple pies.

Sultanas give apple pies a burst of flavour. They’re tangy and a little sour, y’know? Apple pies without sultanas are just sweet on sweet on gooey sweetness. But combine one flavour with another, and something new was created! Yes, I just quoted Ratatouille. The rat is right, accept it. Sultanas elevate the humble apple pie in the same way it elevates hot cross buns and bread. It adds a little zesty kick to it, y’know? And texture! It’s fun! Combine a little bit of pastry, a little bit of apple, a little bit of sultana together, and what do you get? CHEF’S KISS.

I am not a chef myself, but I feel like if you served up a plain apple pie to the MasterChef judges, Jock Zonfrillo would give you that disappointed dad look he does when he thinks you could’ve done better. “Could’ve used some sultanas,” he’d say. Fact.

Also, aesthetically speaking, apple pies without sultanas look so boring. Like more boring than two scoops of vanilla ice cream in a white bowl. It’s just… eh. Give it a little something-something, chuck in the sultanas.

But my main argument here is flavour: the apple pie simply tastes better with sultanas in it. It just does.

So really, all I’m asking of you is to give sultanas another chance… in apple pies. Forget about those days at school of opening your lunch box to the Sunbeam logo. You wanted chips, I get it. Mum did you dirty. But it’s time you opened your heart and give the little guys another chance.

Don’t pick the sultanas out of the pie, or shove them to the side. Try them, savour them, love them. Join me on the sultana-loving side of life. It’s nice here, I promise.

I want an apple pie now.