I do a lot of weird shit for my job. I text guys I dated and ask why they broke up with me. I drive to Campbelltown to buy canteen food in bulk to eat it as an adult. But this might be the most mentally draining, emotionally crippling thing I’ve done in the name of “being a writer at Pedestrian.TV.” I made the jelly pool cake.

By jelly pool cake, you obviously know I mean the one from the Australian Women’s Weekly Birthday Cake book – a rite of passage for any Aussie kid who lived in suburbia. It was the Bible for kid’s parties, even though every single fucking cake was a nightmare and a half involving 40 ingredients, hours of painstaking professional handiwork and a nervous breakdown.

My mum made me the sweet shop, the baby bunting and the dolly varden. Yes, I was that deeply entrenched in the little girl stereotype. But one cake I always, always wanted was the jelly pool. 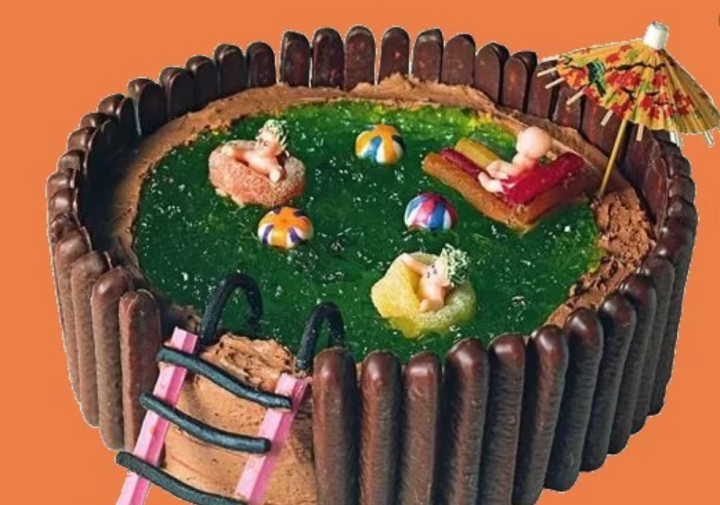 The jelly pool was the birthday cake of many kid’s dreams. Why? I have no fucking idea. The reality of it is a hollowed-out butter cake filled with jelly, surrounded by far too many chocolate sticks. But you cannot reason with child logic. We wanted the cake. WE WANTED THE GOD DAMN CAKE SO BAD.

Good on you if your parents made you this baby. Mine certainly did not – so as an adult, I wanted to give it a shot myself. I am now of the age where I could have my own screaming, tantrumy child demanding this bitch of a thing, so let’s see if I have the Betty Crocker gene.

Turns out you need a fuck-tonne of stuff to make this thing – and most of it you need like, one of. For example, the recipe calls for “one licorice strap”. Where the shit am I buying ONE licorice strap? The fucking lolly corner store? The sweet boutique? No, I have a Woolies, an IGA, a party store and a newsagent in my vicinity. That’s my beat.

I end up buying whole packets of lollies I will never, ever eat. Musk sticks. Licorice. Jelly thingies.

It’s all relatively cheap stuff like butter cake and cocoa powder, but at the end of the day I fork over around $40 for the stupid thing, because of the buying-packets-not-individual-musk-sticks business.

I fall into a k-hole searching for Kool Mints. Do they exist anymore? Did they die off in 1999? I don’t know. I scour the aisles. I ask bewildered shop assistants. The best I can find are Milky Way balls which are a sort of off-cream colour. I almost buy them when…. JILA MINTS! AT THE SCANNER!

Making the cake is easy as shit. It’s packet mix, you add a couple of eggs and some milk, and as long as you have an electric beater (I was at my Mum’s place so I had this) you’re sweet.

Except… I used a tin that was far too big in hindsight.

I popped it in the oven anyway – maybe it’ll rise, cakes do that sometimes. When it came out, it was marginally taller but not by much. When I flipped it like the instructions said though, it was a MASTERPIECE.

So we have one very large, shallow cake that needed to be turned into a pool. I cut out the centre, which seems so wasteful. Look at all this good butter cake I had to chuck (I ate it).

The shallow pool looked like it COULD take some jelly.

From here, I had to make butter cream icing. This basically involved whipping up a log of butter, then adding icing sugar and cocoa powder. YEAH BABY.

I spread that messily around the edges, but once I added the chocolate sticks (I used TV Snacks because, SUPERIOR) it looked pretty damn good actually!

I get the jelly out of the fridge – it’s wobbly, which is how it’s meant to be. I fill up the pool and YOU GUYS!!

At this point I get cocky….

…which of course means everything subsequently goes to shit.

First, I cannot for the life of me glue any of the decorations together. You’re meant to use the remaining butter icing stuff, but it’s a) brown so WTF and b) not that sticky.

I enlist my sister Kate to help, because whenever we played The Sims she was the one who had patience enough to build houses that actually looked good. She makes the pool stairs and completely fucks it.

I make the pool chair, which involves slicing snakes in half and sticking them together with the butter icing.

We make the pool balls using the painstakingly acquired Jila Mints, and the end of a toothpick to draw lines on them. It’s shit. In the end my sister just dumps hers in the dye, which is also shit.

So, something I didn’t tell you. When I was hunting around my three shops for all the bits and bobs you need to make the jelly pool cake, one thing I could not for the life of me find? Tiny dolls. There are three tiny dolls in the OG Women’s Weekly jelly pool cake, and they are integral for making it look like an actual pool.

So in a panic… I bought these.

I don’t know who the fuck is buying these tiny sleeping (dead) babies for ANYTHING? Let alone for a party? But they were the closest thing I could find to “little doll” so I went with it.

Turns out, it makes for a very cursed image when you put them in a pool. Here’s the final result, folks. Don’t say I didn’t warn you.

As you can see, the stairs went from “fine” to “did an earthquake occur”. Don’t even start me on the railings that go into the pool.

Also, my jelly wasn’t set enough so everything started to sink, which only made the babies look MORE drowned. Very, very alarming. 10/10 would not take to a children’s party.

There you go, friends. The verdict is never, ever do this. Ever.