Friends, the weather is warming up and I’m very happy to declare that the Summer of Seltzer is absolutely at our doorstep. It’s happening, the first season of boozy, flavoured sparkling water is nearly upon us.

With the fact that White Claw – the OG and the best – is finally jumping the pond from the US and landing in Australia in mid-October, the time was primed for me to once again put my mouth on the line in the name of journalism. I tracked down and tasted just about every alcoholic seltzer you can buy in Australia – and a couple that are dropping real soon – to see which are Verified Hoon Juice, and which are more faff than fizz.

Without further ado, my very serious and legitimate findings. 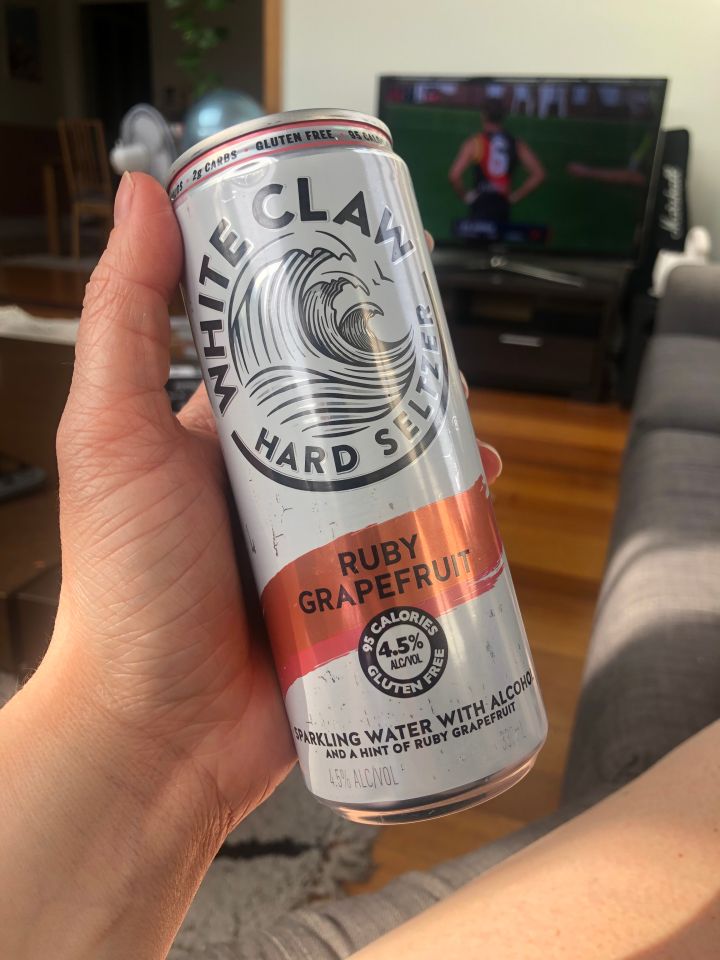 I have to admit, I was a touch suss on the Aussie iteration of the Claw, purely because I love the US original. The fact that these incoming tinnies are 4.5% instead of the American 5% had me wondering how different the rest of the drink was.

But friends, it’s legit. It tastes exactly the same as the US version and maintains my theory that all the flavour in a good hard seltzer is in the bubble.

White Claw is not too aggressive on the fizz and doesn’t have an overpowering carbonation flavour.

The Claw is the Law, and for good reason. 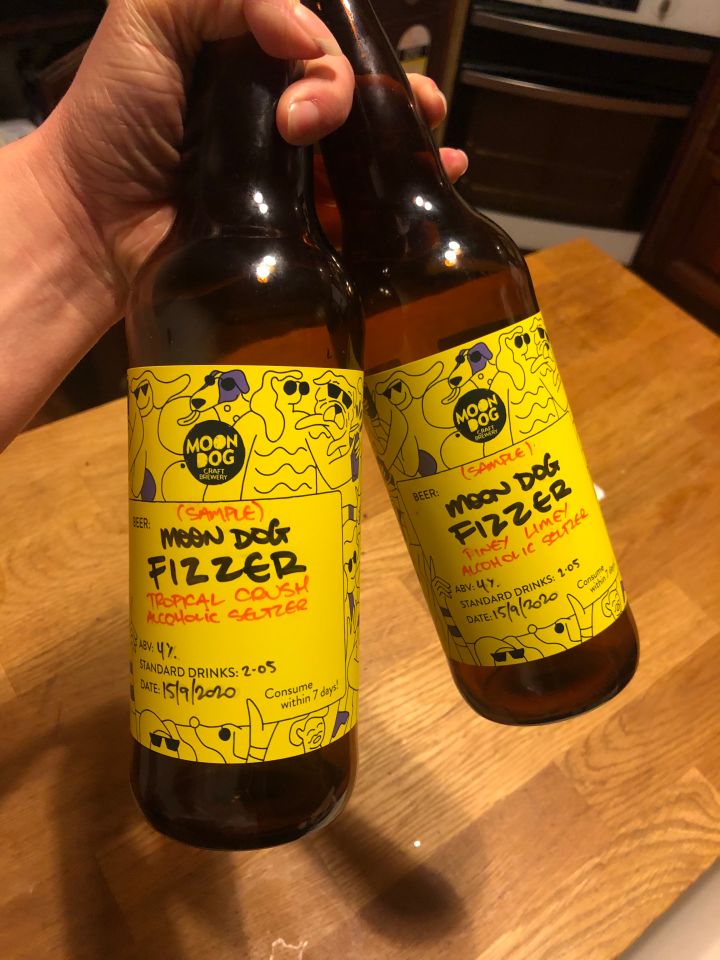 I was very lucky to cop a couple of cheeky sample bottles of Moon Dog Brewery’s run at the hard seltzer business. Named ‘Fizzer’, they’re very much exactly what they say on the tin.

Ripping the lid off the Piney Limey and Tropical Crush versions, these bevs took my straight back to party treats and classic fizzy drinks. Scents of pineapple lollies, Passiona/Pasito soft drink burst from these yet-to-be-tinned beauties, and have a slight sherbety flavour. Exactly like those rolls of hard Fizzer lollies you’d crunch down on as kids.

Hell yeah, I can’t wait for these to be in grog shops already. 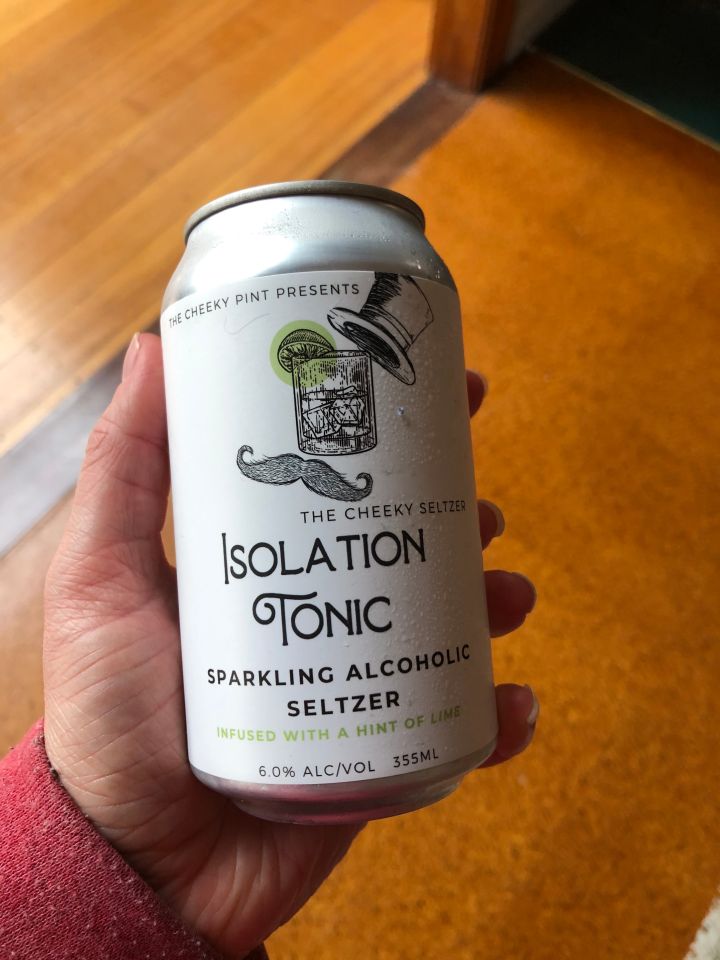 Though this one smells like that fancy lime cordial my parents used to mix with vodka and soda, that’s pretty much all this one had going for it for me. It tastes pretty overly-carbonated, and not a lot like lime.

This one goes hard on the bubble, so I could only sip it kinda gingerly and was the only seltzer that copped a Did Not Finish from me.

But hey! Maybe that’s your thing. Don’t let me stop you from trying it out. 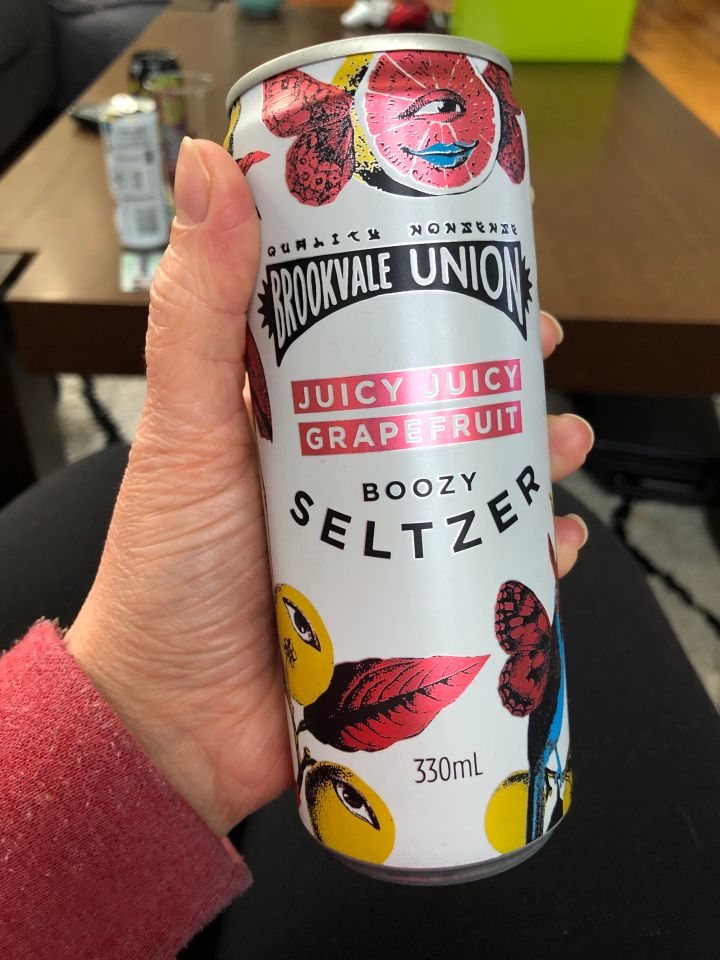 Oof, this one’s a tart binch. Super strong grapefruit on the nose, which made me worry that it was going to be super punchy and sour to drink. Instead, it’s tart at first but then very clean off the palate, almost like a suckerpunch of flavour (again, in the bubble) and then it’s all gone as fast as it came.

It’s similar to White Claw Ruby Grapefruit but from the Aussie brewers behind Four Pines.

This hard seltzer may only have a gentle bubble, but it was still enough to make me burp. Into it. 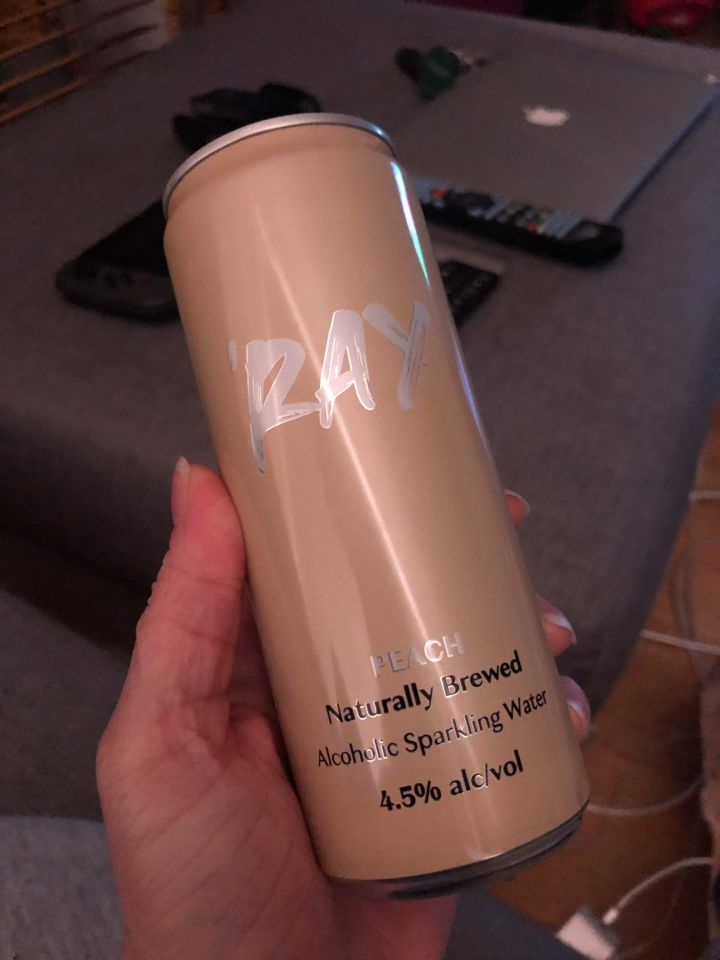 Now, this is a bevvy that I adore, and have gone back to several times. I can’t help myself, it’s bloody yum!

Instead of a sweet, artificial peach flavour, the ‘Ray seltzer (short for Footscray, where it’s brewed) has got the gentle, natural sweetness down-pat. Easy fizz so it doesn’t make your nose go all weird, and can happily sit on a few of these on a warm afternoon. 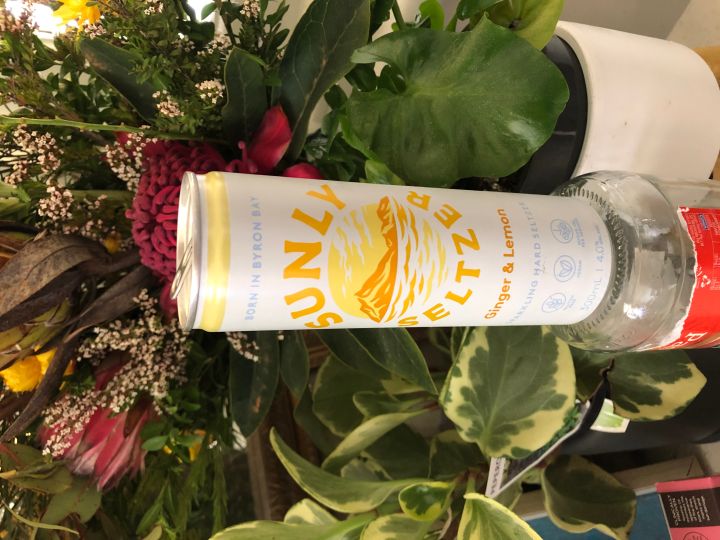 From the makers of Stone & Wood comes this zesty little hard seltzer, which has much more lemon on the nose than anything else.

Tasting it, the ginger almost removes any trace of bitterness, but creates quite a neutral but aromatic flavour – it’s like legit ginger flavour and not some artificial nonsense.

The only downside of this is that it doesn’t have much flavour at all, and if I blocked my nose it wouldn’t taste like much more than fizzy water. (I did do that, by the way, and my hypothesis was right.)

Good bubble though, gotta respect that. 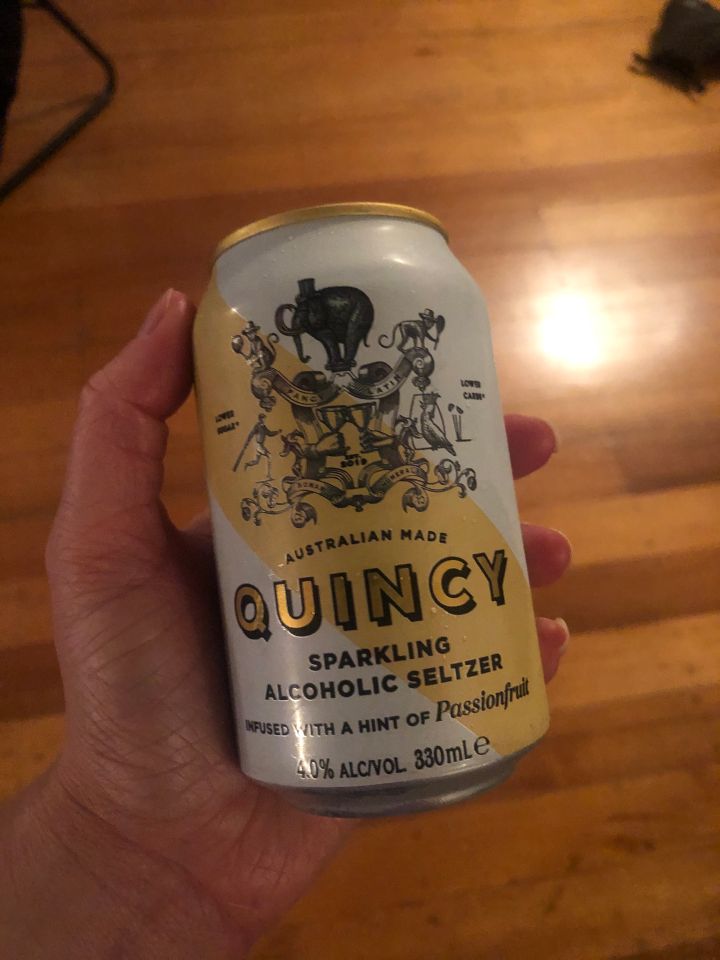 I think this was the very first noted ‘seltzer’ on the Aussie market, which made its debut just ahead of the curve. The Quincy smells a lot like Passiona, and also like it could taste quite carbonated in an attempt to neutralise the sweetness of the passionfruit.

Instead, this one is sweet. Like, I don’t even know if it could be called a seltzer, because it has the energy of a bougie UDL. Though it’s sweet, it’s not sickly like the classic alcopops, but it’s definitely not the kind of flavour you’d expect from a seltzer. 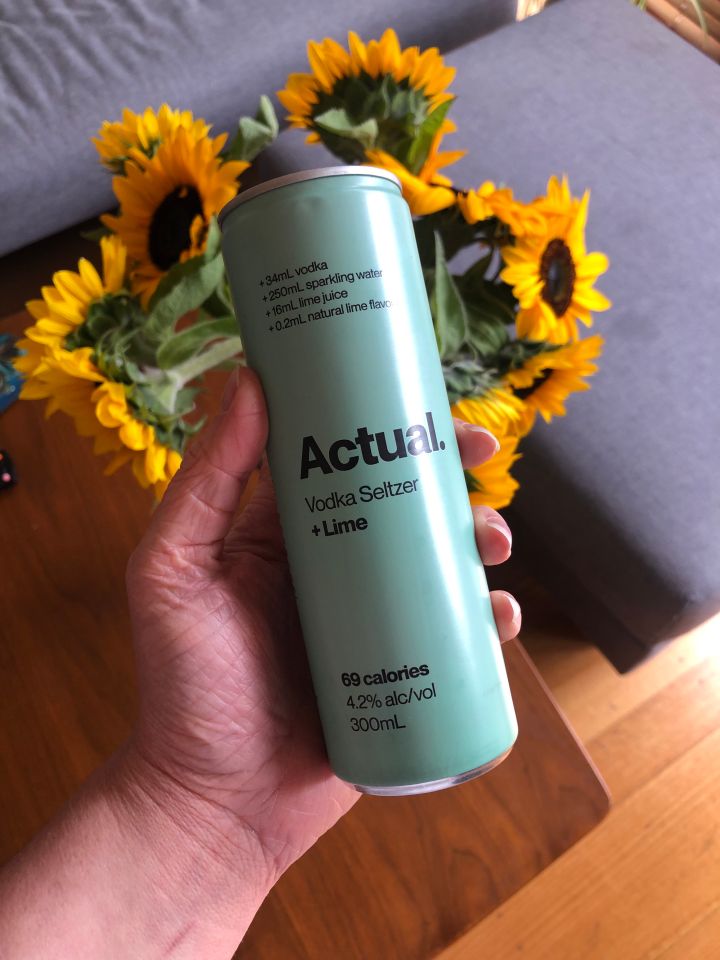 I got into this one just before the onslaught of hard seltzers began, and honestly, it’s good for what it is. Does what it says on the tin: it’s a seltzer with vodka and a twist of lime. No frills, no fuss.

Good bubble with a gentle flavour. The only thing with this one is that is tastes a little more like a sharp lime – almost like the flavour of lime zest is in there in place of the juice. Gives it a bit of a different citrus flavour. 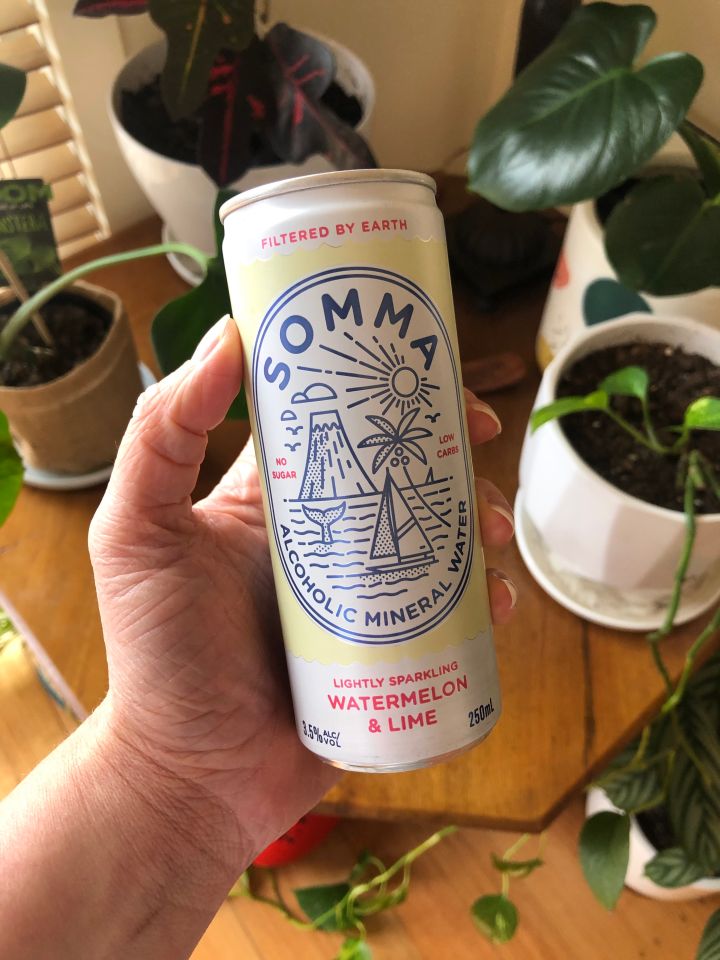 Watermelon flavour is always a risky game, because, for the most part, it doesn’t end up tasting anything like watermelon and just kinda tastes like a lolly imagination of that delicious summer fruit. The Somma ~alcoholic mineral water~ actually gets it pretty much on the mark, even though it absolutely smells like WarHeads.

It’s got a nice zing from the lime with a gentle watermelon flavour supporting it, and it’s just really bloody refreshing, while setting off the sour receptors on your tongue like a mildly-stroppy frog in a sock. Yum yum. 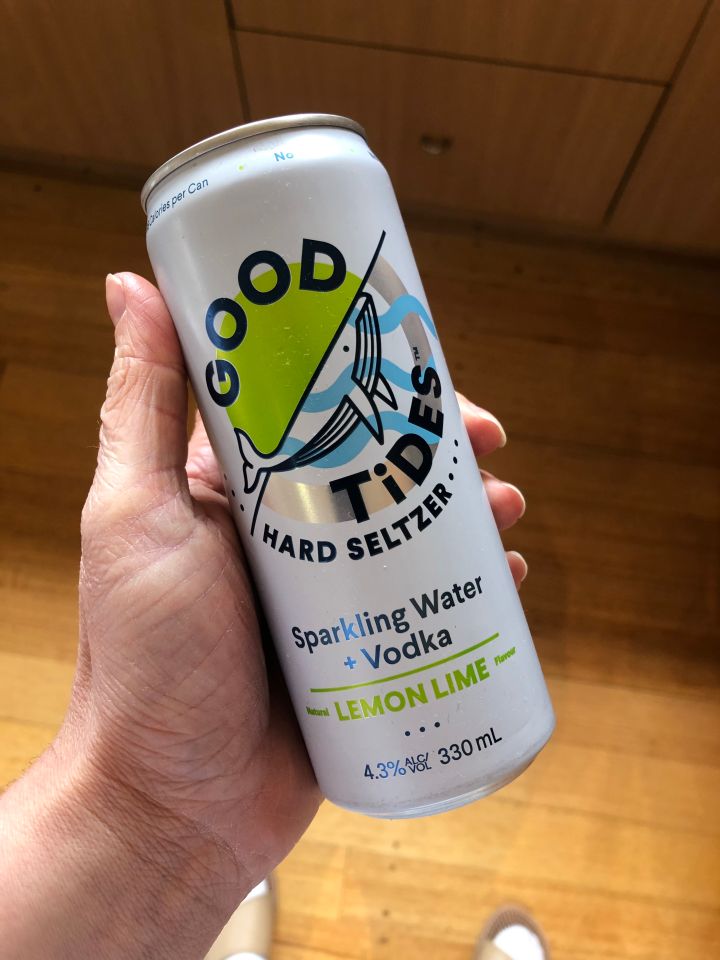 Being a lemon-lime flavour, this one legit smells like Sprite. Like, no two ways about it, it smells just like that tummy-settling fizzy drink, and I’m about that.

It’s a little on the sweet side, so good for those who are still weaning off the classic Vodka Cruiser sesh of summers past, but want something with a little less of a sugar rush attached. The Good Tides seltzers use triple distilled Vodka O in each tinnie, which I reckon rounds out the flavour and gives it a bit more recognition than other brands.

A nice, easy-drinking fizz and definitely something I want to tuck into on a hot summer’s day. 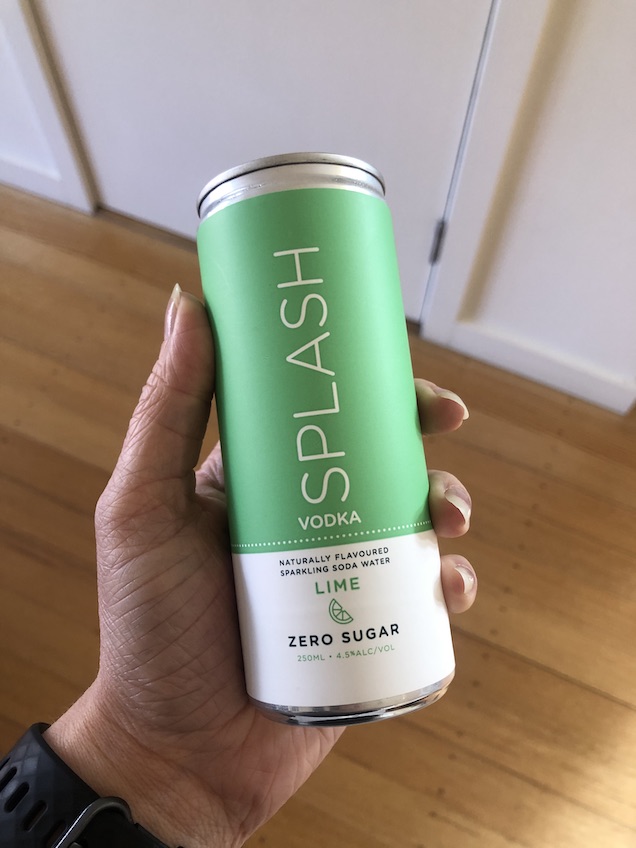 Maybe it’s the zero sugar thing about Splash seltzer but something about it didn’t really click for me – its lime flavouring tastes a bit more like lime zest than the juice, and the flavour disappeared really quickly. Up against the other limey seltzers I’ve had, it doesn’t really hold a flame to my personal faves like White Claw and Good Tides.

So if you’re into something that’s clean off the palete and reminiscent of knocking back a vodka lime & soda at the pub on a Sunday arvo, this one’s for you.

And this isn’t even the end of the suddenly-bursting seltzer scene – in the time between starting this important research and now, brands like Smirnoff, Rainbird, Two Birds, Dad & Dave’s, Fellr, Sips, and heaps more have popped up. My work is never done.

In conclusion: welcome to the Summer of Seltzer, binches. It’s happening.