If there’s one thing that should be getting you out of bed bright and early on Saturday, May 18 (apart from the ability to exercise your democratic rights) it’s the knowledge that once you’ve cast your votes into the big ballot bins, you can treat yourself to a little snack. A tasty morsel. A wee treat from whatever the election day vollies are cooking up.

As many polling stations across the country are hosted in public schools and community halls, it’s become an inherent Aussie truth that the local P&C absolutely will turn up and turn out some grub for election voters. It’s nearing the level of weekend-in-the-suburbs custom that the mighty Bunnings snag holds. You go and do your bit for the country, and you cop a feed after.

Joining together the very important work that the team over at Democracy Sausage have done, along with my own crowdsourcing of opinions and tips, please enjoy this list of the best places to get along and vote at this weekend’s federal election, based entirely on what food is being dished up.

The election day sausage sizzle is one of our nation's most beloved parliamentary traditions. But where did this democratic delicacy come from and, more importantly, why are they so damn delicious? @brad.esposito investigates.

Recommended by my mate Vinnie who sold me immediately with “coffee stall, bbq and other snacks all run by the kids” for the last VIC State Election, the Flemington Primary School in the Maribyrnong electorate is a clear winner simply because kids in tiny aprons is an adorable mental image. Pls let them be there this time around.

Putting up some fierce competition to Flemington around the corner is Kensington Primary School, who are upping the ante with a full bake sale and a sausage sizzle with both vego and halal options AND a raffle, kids craft and a plant sale.

Boasting all the right trimmings for a polling booth in a primary school, Concord West (which is confusingly in Concord North?) is raising money to put air conditioning in their classrooms. Baffling that they don’t already have aircon coming out of that Sydney summer, really. Bonus points for recognising it’s Ramadan and offering halal options, and the year 6 kids are selling cold drinks to raise coin for their sponsor child in Kenya. Bless ’em.

These smartasses are holding a “mini fête accomplis” (fait accomplis, get it?) which is just cute and so deeply nerdy. Garn give ’em ya hard-earned cash so they can update their playground, Canberra.

Up at Cape Tribulation, there’s no stopping the sausage sizzle no matter the weather, and they’ve got REAL coffee. Hell yeah, just don’t try and share your snag with the local salties.

It’s the CWA, what more do I need to tell you? Ok fine they’ve got your stock standard CWA fares: homemade preserves, slices, and cakes, but there’s also recipe books (!!) and their “scone recipe tea towel.”

For the NSW State Election, they were selling jars of pickles and that’s all you need to get me over a state line. 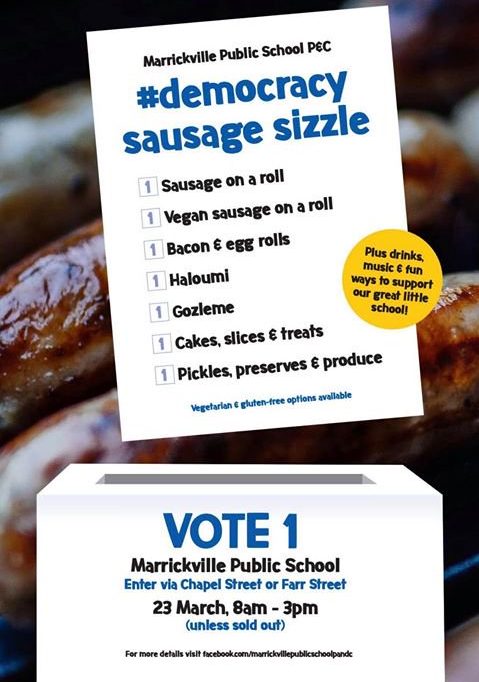 Easily one of the best I’ve seen, hands down. Canterbury PS are holding mini fair/fete with face painting, jumping castle, and a petting zoo (!!!) IS IT TOO LATE TO ABSENTEE VOTE I GOTTA GO TO NSW IMMEDIATELY.

Out in Bridgewater On Loddon, the newly-formed Campbell’s Forest CWA is holding a fundraising stall to raise money for the Bridgey community. I used to visit family in Inglewood every year and mates, the CWA does not fuck around when it comes to preserves.

I can never ignore a good whip-smart joke, and with North Ainslie Public serving up a “culinary embodiment of democracy, with options to suit all palates, from the conservative to the progressive and beyond” I can’t NOT include them.

Easily a good pick for voting with St Leonards PS being right in Glenelg, and who doesn’t want to enjoy a delightful feed at the nation’s Hellmouth? Nobody, that’s who.

Probably one of the most northern democracy sausages registered, the teachers and learning staff at Sanderson Middle School in Malak are raising funds for special needs students, get right around ’em.

Huge points to Hazelbrook Primary for being smart and remembering that Eurovision is on the same weekend, and decided to hold a “Eurovision Democracy BBQ” where you can show your Eurovision finalist support by topping your snag with a sauce from a ~finalist’s country~. I know there are deep issues with Eurovision this year but Christ that’s cute as hell.

For those of you over in the US yearning for the soft white bread and tomato sauce of home, duck over to the Aussie Consulate from 5pm on May 17, and get your snag fix.

So there you have it, a few of the best picks for a solid feed while you’re trying to navigate that huge voting form. Go well, and put the onion on top of your snags.