The first time I saw the video I watched maybe thirty seconds of it.

Just another food video, shot from above – unattributed hands moving rapidly. Putting spices in bowls. Putting chicken in ovens. You know the drill. Hours went by and that was it: the endless scroll of my newsfeed had moved onto something else. And then it happened, rather suddenly, an explosion of outrage and disgust, the familiar sound of the internet, coming together in harmony over its hatred of a specific thing.

“This is what happens if you try and do all of the cooking we have ever invented to one dish,” tweeted one person. “If someone served me this I would punch them,” said another.

okay but I just wanna know WHY????? pic.twitter.com/BF49YX2jyc

For a brief moment, it felt like what the internet should feel like. This is what those early researchers meant when they stuck a few wires together and created the internet. There was a common ground, an exchange of information, and an acknowledgement that No, We Won’t Stand For This.

You’ve probably seen it, because millions of people have. If there was a recipe for virality, it might look something like this:

Throw six chicken breasts into a bowl with a bunch of spices, bake at 180C, shred it all with some forks, slather it with BBQ sauce, bacon and cheese, compress it into a two inch thick cake dish sandwiched by two tortillas, and chill in the fridge. After an hour (when the chicken cake has “set”), remove from the tin and slice it like a pizza, before coating each slice in bread crumbs and deep frying it. Suddenly, you’ve got a beautiful wheel of deep fried chicken taco cake (very normal), and now all you have to do is coat it in pizza sauce, cheese, and pepperoni, before placing the whole thing under the grill for five minutes. Beautiful! Magnificent! Bon appetit!

That is the outline of a video which has haunted the internet for days, ricocheting through Twitter and Instagram and Facebook, exposing millions of people to its horror. Officially, it is called a Deep Fried BBQ Chicken Pizzadilla. Unofficially, it has been given many names – none of them positive – as the public try to grapple with this Frankenstein’s Monster of food videos.

As one Twitter user points out, it is funny that it’s called a “pizzadilla,” so close to “pesadilla,” the Spanish word for nightmare. 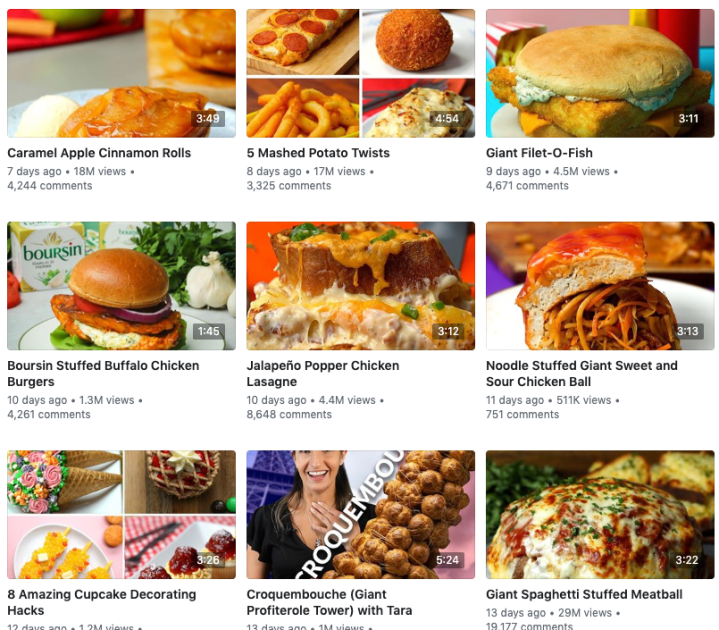 The video and recipe was created by Twisted Foods, a UK-based content machine that is just one arm of Jungle Creations.

On its Facebook and on its Instagram you can familiarise yourself with similar videos, like the Taco Spiral Meatloaf or the Jalapeño Popper Chicken Lasagne. There’s a Noodle Stuffed Giant Sweet and Sour Chicken Ball, which comes served on a clean, white plate, with a plasticine glaze of bright red. There’s the Giant Philly Cheesesteak Onion Ring, which sits on a chopping board like a breaded bike wheel, its deep-fried outer crust fading from a rusted brown to a pale, almost white centre.

All of these videos have millions of views, a library of horrors and food chaos for the digital age. It is the obvious meeting point between YouTube’s Epic Meal Time and BuzzFeed’s trendsetting Tasty. It is the proof of an emerging truth: people will always enjoy food content, but will enjoy it much more if that content is beyond the boundaries of their own kitchens and lives.

Crucial to its virality, the Deep Fried BBQ Chicken Stuffed Pizzadilla was recorded from Instagram and brought over to Twitter when it was posted by K, who tweets at @_kurlykay. The Boston, Massachusetts, native said these are her favourite videos to watch online.

“I’ve seen so many renditions of it all day,” she told me. “I’m a foodie myself, but once I saw this one I just knew it wasn’t the ordinary 60 second clip.”

For days, K’s mentions have been flooded with confused observers – though she does say that the French have had a field day with it. “It was mostly attacking Americans for their terrible food choices,” she says, before noting that it was the creation of a British food blog. “This one monstrosity isn’t our fault.”

Monstrosity. That’s what it is. So unsightly and outrageous and wrong. The Deep Fried BBQ Chicken Stuffed Pizzadilla is a mockery of everything we know. A monument to man’s gluttony. It is the end result of a world that has come to eagerly reward content just like it. 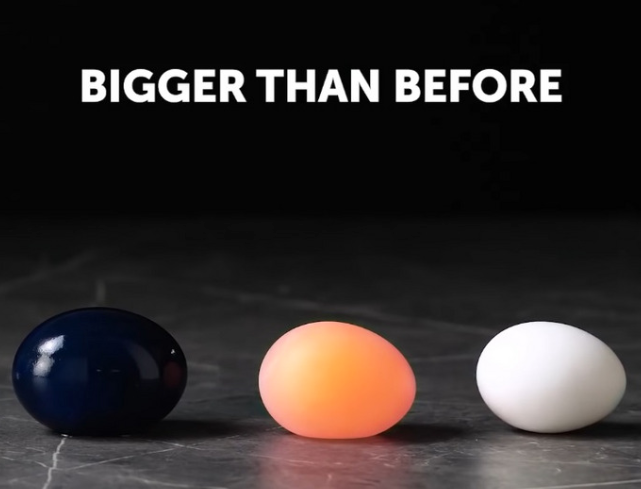 The success of that video, and the litany of food videos before it, hits at our primal instincts. Food is a constant in our lives, but we are often trained only to eat it and prepare it and do with it that which society dictates as normal. It is the abnormal that we crave. There is a business is delivering on that.

Would you eat the Deep Fried BBQ Chicken Stuffed Pizzadilla? Chances are you probably don’t have to. So familiar are the ingredients used to create it – the breadcrumbs, the cheese, the pepperoni, the plainly baked chicken breast – that its obvious savouriness sits at the back of your tongue.

Do you know what it tastes like? No – but you’ve had BBQ sauce before, and you sure as hell know about pizza. You know about the crunch you’d feel biting down on it, and you know of the familiar, squelching feeling brought on by the wet, torn apart chicken inside it. You know what it smells like and you know it sits heavy in your hand and in your stomach. After each bite, if you can stomach it, you know also of the almost graphic, orange-tinged oil slick that collects itself on your plate. These are the familiar feelings we long for but are forbidden from acting upon. These are those feelings that a viral business has been built on.

It was an algorithm that first brought the Deep Fried BBQ Chicken Stuffed Pizzadilla to K’s attention, rocketing up her Instagram’s newsfeed weeks after it had first been posted, and it was user-curation that resulted in it going viral everywhere else. Content like outrageous food videos is perfect for all parties: the creator, the user, the reactor, the clout-hunter. You can reply in disgust or you can forward it to a friend. You can, if you’d like, quote tweet it or re-upload it yourself, knowing that it will do well because it has been proven to do so. No one is sharing that recipe with the intention of cooking it. If they are, god have mercy on their souls.

In a way, it is perfect content. Who gets angry at a food video, other than the usual handful of people (somewhat rightfully) pissed off about food wastage? The Deep Fried BBQ Chicken Stuffed Pizzadella works because we designed a system, together, that would make it work.

The original version of the video runs at over two minutes. It would not be outrageous to estimate most had watched it in full. That’s engagement – real engagement – not views that have been gamed by platforms or likes or million-strong follower counts that don’t deliver on any sort of meaningful interaction. We want to see it and share it and engage with it. We want to bond over its oozing cheese and thick, chicken-stuffed sides. We want to ask our friends, irl, if they saw it. “Disgusting,” you say, scrunching your face. “Maybe we should make it?” you ponder, before realising you don’t have the time or the energy.

In the end, the video works because we want it to. It has been shared because that is what it was designed to do. It’s not about sharing a recipe with your neighbour, or drooling with your mouth open, it’s about content made specifically to be content.