Today, Arnott’s sent me and my colleagues some boxes of Shapes. No, not Chicken Crimpies upsettingly. Mystery boxes filled with snacks of no specific flavour.

Well, they have a flavour – we just don’t know what it is yet. Arnott’s press release says just 50 boxes were delivered to “the lucky few”, and that we were to take a crack at sussing what the flavours were.

The clues we got: they’re “quintessential” Aussie flavours. The back of the showbag thingy has this on it: 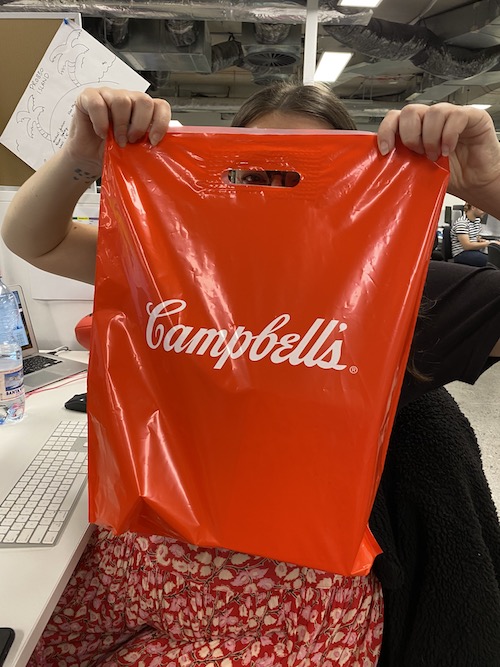 So Campbell’s are involved, Aussie flavours are involved. We deduced they could not be Vegemite, because Vegemite & Cheese Shapes already exist (and are delicious).

At first we thought both boxes in the bag were the same flavour, we were wrong. Both boxes had Shapes in the… shape… of mainland Australia, but there were two distinct flavours.

We collectively decided the first box was either Meat Pie & Sauce, or Sauso Roll & Sauce. You know – tomato sauce vibes, a bit of spice, some meat flavours in there. But as with party pies and sausage rolls, essentially all the same flavours. 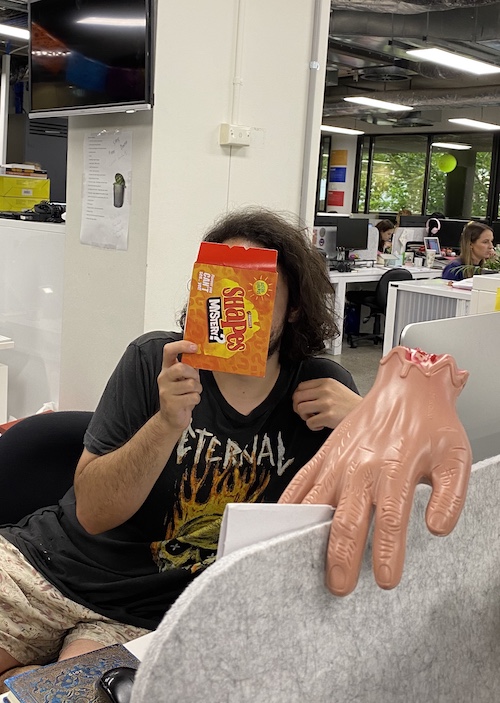 I have eaten a whole box of these in the name of investigative journalism. I don’t like them and I’m on a diet, but I’m committed to nailing this one for the readers. Ily. They taste like something you’d buy at a 7/11 hot section for $2.15. I’m pretty sure its a sausage roll with tomato sauce, because there is an unpleasant sugary flavour too. A blokey guy in the office seemed to agree, and added that they are “Four And Twenty” brand for sure -lock it in Eddy. “Worcestershire Sauce” also came up with another colleague, not a bad guess too, I thought.These are not enjoyable. To me, they taste like you just threw up from a hangover and are too weak to get up and get yourself a water, so you just lie there for a bit with some chunks in your mouth, and swallow. A taste I am all too familiar with.

Another colleague of mine, Rachael, says meat pie.

These crackers taste like a servo pie. And honestly, the great Australian delicacy has been betrayed by this cracker creation. How much there is to love about a servo pie – it’s the true friend that is there for you anytime, and anywhere, whether you’re starved and malnourished on a road trip, or need a feed on a night out. It’s got your back. Heck, my teenage-hood would be nothing without the servo pie there to help me sober up many a mate who’d gone too hard at pre’s (shout out to Forestville Shell lol). But this cracker takes the tomato sauce-drenched meal, and all it’s delicious meat juices, and reduces them to a stale cracker in a novelty shape.

I don’t see why they dislike them – I fucking loved them. What’s not to love!? Meaty vibes, saucey vibes. GOOD. But whatever. Think we can deduce it’s definitely a servo-based flavour.

The second flavour was far harder to figure out. It was very herby? Maybe a bit zesty? We couldn’t settle on any angle with it – was it soup flavoured, considering Campbell’s is somehow involved? My best guess is chicken noodle soup but it just didn’t have the chickeny nuance to it, and also how is that an Australiana flavour?

Things that strike me as Aussie flavours:

Lamington (no, also Smith’s already did that)

Milo (absolutely not it)

Vanna had more things to say about these.

It’s a sandwich my dad has made a few beers deep, a mixture of everything in the kitchen and then having the lid off the paprika fall off while attempting to sprinkle a bit on and ending up with half the jar. I call it “Midnight Dad Sambo”.

I’m now leaning most toward cob loaf. Whatever the case, we’re all finding out after Christmas, when Arnott’s say the new Aussie Legends Shapes are dropping in stores. What’s your guess?